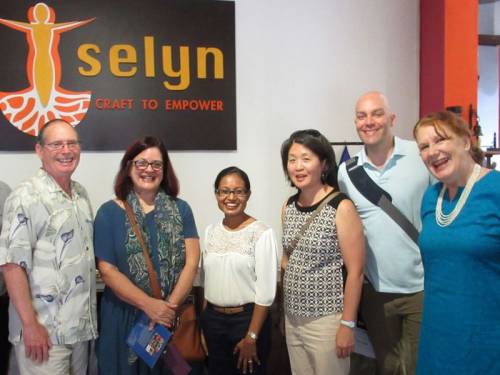 COLOMBO, SRI LANKA – Sri Lanka faces enormous economic and social challenges, but when a group representing several ministries of the Presbyterian Mission Agency visited in January, they saw a couple of fair trade and innovative workplaces beginning to flourish.

The group represented Presbyterian World Mission, the Presbyterian Hunger Program and Mission Responsibility Through Investment (MRTI). Group members traveled to Sri Lanka in fulfillment of Overture 10–01, which was passed at the 222nd General Assembly (2016) in Portland, Oregon, and directs the denomination to help ensure that the scourge of slavery is eradicated within the supply chains of those with whom we do business. In addition to investigating what is not working, the group also visited two outstanding examples of best practices.

In the capital city of Colombo, the group visited a bright, colorful retail store named Selyn, the only guaranteed fair trade company in the country. The business sells products such as fabric, clothing, soft toys and home décor made of 100 percent cotton. “The tradition of the handloom dates back as far as 543 B.C., when Vijaya, the outcast Gujarti prince, upon landing on the coppery shores of Thammennawa, saw the Yaksha princess Kuweni spinning soft threads of cotton on her spinning wheel,” Selyn’s brochure states.

Selyn was founded in 1991 by Sandra Wanduragala with 15 women in Kurunegala. She was later joined by her brother, Hilary Wanduragala, and the company now has more than 1,000 members in the cooperative who make products for the store. Sandra named her business after her first-born daughter, Selyna, who is now an adult and is also actively involved in the company.

Today, the company has over 16 workshops in handloom villages in the rural outskirts of the Northwestern, Eastern and Southern provinces of Sri Lanka. The artisans can create their masterpieces within the comfort of their own homes instead of going to a factory and worrying about child care. Because some women in rural areas must travel nearly all day, Selyn is creating areas for nursing mothers. The company also provides annual health exams for the entire family. “It’s a holistic program rather than us just providing employment,” said Anuradhi Navaratnam, who works closely with the program.

Navaratnam is an attorney who has interviewed women who have left the country looking for jobs and sometimes faced dire circumstances. That led her to work with Selyn and create an organization called LIFE to offer alternatives to leaving the country for domestic jobs in Saudi Arabia, Lebanon or Kuwait.

Women who travel abroad are subject to the “kafala” system, a sponsorship program that monitors migrant workers throughout the Middle East. Some sponsors take the women’s passports as soon as they land, and if the women want to leave their jobs for better ones or go home, they have no recourse.

Selyn also offers classes in money management and tries to help women stay in the country with their families to achieve their goals.

Rather than produce mass quantities of merchandise cheaply, MAS produces intimate apparel, athletic wear and swimwear that require a high degree of technical acumen. The ministry group visited a factory that primarily makes bras, which have more than 30 components, for companies like Victoria’s Secret.

But that’s not all that sets MAS apart from its competitors. The company’s corporate values include honesty and integrity, humility, passion for excellence, freedom with accountability, trust and mutual respect. And the company upholds those values in unique and innovative ways, always keeping the employee as the focus.

Mostly women work in MAS’ well-lit, pristine factory outside Colombo, the national offices for the corporation. MAS makes transportation available at no cost. Every worker receives a free breakfast every day and a subsidized nutritional lunch. It’s a hard and fast rule that management only eats after employees eat. Child care is available and employees select the music for their own radio station within the plant.

In addition to protecting its workforce, MAS is also protecting the environment. The company says it owns the first factory powered completely by carbon-neutral sources. Energy consumption is 25 percent lower than comparable factories and potable water consumption is half the normal standard. The factory’s exterior walls are made of compressed earth blocks to reduce the embodied energy (the sum of all the energy required to produce any goods or services) in the building. The architectural design is based on the tropical climate, with a unique cooling system that economically produces a comfortable indoor environment.

“MRTI has a practice of engaging with both the leaders and the laggards within a given industry,” said Rob Fohr, PMA’s director of the Office of Faith-Based Investing and Corporate Engagement. “With the laggards, the conversation revolves around how they can improve their weak policies and practices, while with the leaders, the conversation focuses on what can be learned from their strong policies and practices and how those practices can be replicated by others. Based on our experience at MAS Holdings, there is much to be learned. The values espoused by the company’s leadership seem to cascade throughout their operations, and while no company is perfect, MAS appears to get a lot right with respect to environmental and social responsibility.”