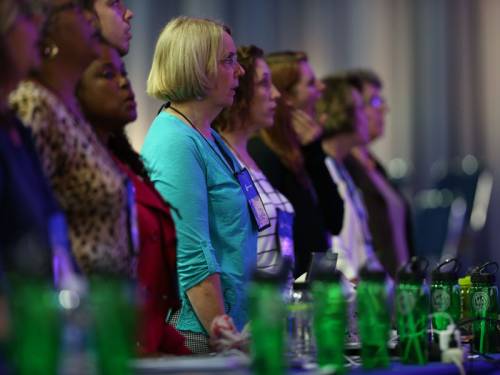 Commissioners to the 222nd General Assembly held in Portland, Oregon in 2016 participate in a devotion remembering the victims of recent gun violence. (Photo by Michael Whitman)

LOUISVILLE — Gun violence prevention can be woven into various aspects of church life, from worship and pastoral care to Bible study and youth groups. But the potentially divisive topic warrants some preparation, thought and sensitive handling, according to experts featured in the latest webinar in the “Standing Our Holy Ground” series.

“We often have a very visceral reaction to that word and we tune out after we hear the word. So, in many ways, we have to sometimes back up and acknowledge what happens in our minds and in our guts when we think about guns …  before we even go into the topic itself.” 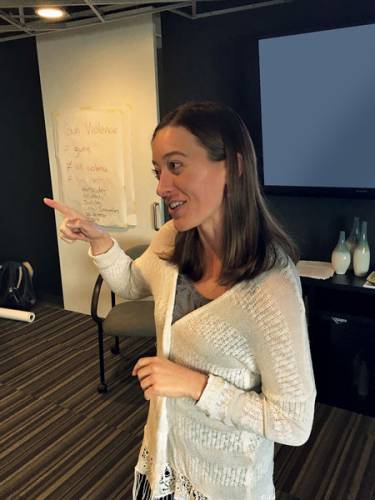 The Rev. Sarah Logemann, a pastor in Miles City, Montana, was among the speakers featured in a Tuesday seminar on preventing gun violence. (Photo by Tammy Wiens)

Logemann, pastor of First United Methodist Church in Miles City, Montana, was one of three featured guests during the event. The one-hour webinar focused on giving churches the language and tools to discuss gun violence prevention and ways to move from discussion to action.

The webinar — presented by the Presbyterian Peacemaking Program of the PC(USA) in collaboration with Presbyterian Peace Fellowship — was the seventh webinar in a yearlong series focused on what the faith community can do to address gun violence.

Logemann is the author of “G-NS: A Resource for Generous Dialogue about Gun Violence,” a curriculum from the PC(USA) that’s aimed at a college audience but adaptable to older and younger people.

She’s found that “a lot of gun safety advocates are survivors or families of victims of gun violence, but there really are a lot more people that are sort of in the middle, maybe gun owners or users who are very supportive of gun safety who haven’t felt invited into the conversation in a way that they won’t be judged,” she said.

Both she and fellow speaker Virginia Classick support being inclusive of gun owners and making them feel like there’s a place at the table for them when churches discuss gun violence prevention.

“I think it’s crucial that we establish at the beginning, that this movement is not anti-gun,” said Classick, co-chair of the Gun Violence Prevention Task Force of the Episcopal Diocese of Los Angeles. “A major barrier to effective gun violence prevention is the constant polarizing and paralyzing false dichotomy of pro-gun/anti-gun.”

Classick noted that gun violence prevention can be incorporated into various aspects of the church and involve everything from writing letters to the editor to distributing gun locks to showing educational films and posting domestic abuse posters with phone number tear-offs in women’s restroom stalls.

“The mental image of gun violence for many people is mass shootings and that often precipitates an interest in getting involved and then that fades,” she said.

Looking at each form of gun violence and then the distinct prevention strategies for each one helps faith communities to focus their work, sustain the efforts and determine what they have the capacity for and interest in — whether it’s mass shootings, suicides, school violence or unintentional shootings, Classick said.

A gun violence prevention tool kit developed in her archdiocese can serve as a useful resource for congregations, she said.

“While there may be a task force or a committee that organizes and guides the work, it is the congregation as a whole that takes this on,” Classick said.

In addition to addressing gun violence that occurs in the larger society, churches today also are faced with deciding how to keep their church grounds free of gun violence in an era of mass shootings.

Attacks like the ones at two mosques in Christchurch, New Zealand, last March and the Tree of Life synagogue in Pittsburgh in 2018 remain rare but “have a major impact in people’s consciousness and that, I’m sure, for many of your congregations has instilled a sense of fear,” said Katie Day, who also spoke during the webinar.

Day is an academic and minister doing research that relates to how houses of worship are addressing safety and security in light of high-profile shootings.

The security approaches being adopted vary and include enhanced surveillance, locked doors, active shooter response training and allowing or encouraging members to carry concealed weapons, said Day, who recently retired from the faculty of the United Lutheran Seminary in Philadelphia.

“There are many options that congregations are pursuing right now,” she said. “But at every turn, there is an opportunity, in fact, a need for dialogue around what are our theological commitments? What is the source of fear? How do we as Christians, as people of faith, live in faith and not fear? How do we practice open hospitality? What do we mean by security and how is this affecting our own worship life together?”