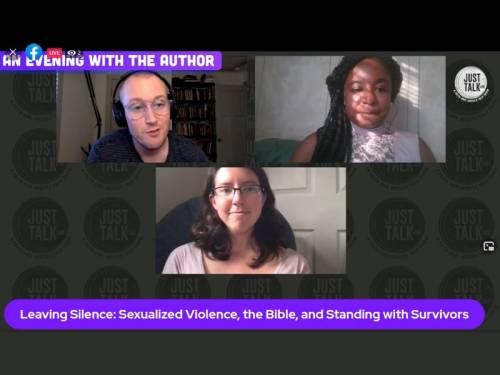 Author Susannah Larry (at bottom) was interviewed by the co-hosts of “Just Talk Live,” the Rev. Lee Catoe and Destini Hodges. Screenshot

LOUISVILLE — Dr. Susannah Larry, the author of a new book on sexualized violence, got to know the “happy parts” of the Bible while growing up in a Presbyterian church but had to wrestle with the book’s more troubling aspects while attending Vanderbilt Divinity School.

“I realized that the Bible portrays, with a lot of raw, graphic realness, some of the trauma that we still experience today,” said Larry, an assistant professor of biblical studies at Anabaptist Mennonite Biblical Seminary in Elkhart, Indiana. “We’re still trying to grapple with these themes of violence and abuse and injustice.” 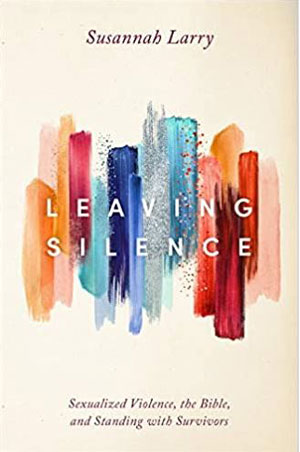 Larry shared her thoughts during Tuesday’s episode of “Just Talk Live,” a web series by the Presbyterian Church (U.S.A.) that featured the author and her book, “Leaving Silence: Sexualized Violence, the Bible, and Standing with Survivors” (MennoMedia/Herald Press, 240 pages).

Larry’s introduction to tough parts of the Bible, such as a gang rape in the Book of Judges, helped to spur her to write the book.

“I knew from my experiences as a person who has experienced trauma, and as somebody who came to work with and know a lot of people who have experienced sexualized violence, that this was something that I had to translate in a way for a broader audience,” she said. “I wanted people to be able to encounter the Bible in a new way and see a lot of these violent stories as — in a way — a testimony to a God who sees us, that God’s story of God’s people is not merely overlooking these really ugly parts of humanity that we have to grapple with but is engaging them and inviting us into a deeper engagement with them as well.”

Larry, an Old Testament scholar, mentioned several instances of women, including Hagar and Tamar, being victimized in the Bible. She also talked about problematic linkages between purity and virginity in the Bible.

She uses her expertise to illuminate such texts “so that we don’t have to fear the Bible,” she said. “We don’t have to be traumatized by the Bible, but perhaps, we can make these stories come alive in a way that lets the Bible be a liberating word in our times, in the ways that we need it.”

During the show, Larry explained why she views Jesus himself to be a survivor of sexualized violence. For example, she noted that he probably was naked when crucified.

“We don’t usually see a naked Jesus being portrayed in most of Christian art, but if we look at other contemporary ancient sources that deal with crucifixion and what that meant in the Roman world, it was a very sexualized kind of thing, and oftentimes, people would be positioned … on crosses to make their genital areas more pronounced in order to humiliate them,” Larry said. “So, what Jesus experienced was not just execution, which would be terrible enough, it was an execution that intertwined this element of sexualized violence with it.”

Although that view raises a lot of questions, it’s something that can be empowering, she said.

“For me, the fact that Jesus is a survivor means that we have to understand God and the God of Scripture, in particular, to be profoundly in solidarity with survivors of sexualized violence, and furthermore, sexualized violence does not have the final word in Jesus’ story,” Larry said. “He does die and he is also raised from the dead, and yet his trauma is not erased; Jesus still bears the wounds on his body of what he has experienced.

“And I think that’s a very helpful and empowering way to think about trauma, that it cannot have the final word, and yet, it is still part of our story. It is not erased. It is remembered on the body of God,” she said. “So, for me, the story of Jesus, as I’ve learned to encounter him as a survivor of sexualized violence, has been really instrumental in my journey of empowerment and healing.”

You can watch the full interview at bit.ly/3vqeCMz.

“Just Talk Live” is a talk show by “Unbound: An Interactive Journal on Christian Social Justice” and the Young Adult Volunteer Program of PC(USA).