LOUISVILLE – Following the adjournment of the 222nd General Assembly (2016) on June 25 in Portland, Oregon, members of the Presbyterian Church (U.S.A.) have continued to witness the denomination’s historic shift away from its largely white national focus and leadership toward greater racial, ethnic, and cultural diversity.

“And we’re happy to make that shift,” said the Rev. Dr. Michelle J. Bartel, coordinator of Theological Education and Seminary Relations for the Presbyterian Mission Agency. ”The Presbyterian way of being is alive and well; and theological education is playing a critical role in the changing face of the denomination.”

As Bartel recently considered the “visible leadership” of the 1.7 million-member denomination—which now includes the Rev. Dr. J. Herbert Nelson, II, the first African-American man elected as the stated clerk or top ecclesial officer of the nation’s largest Reformed body; two women General Assembly co-moderators, one of whom is African American, the Rev. Denise Anderson and the Rev. Jan Edmiston; and the interim director of the Presbyterian Mission Agency, ruling elder Tony De La Rosa, a gay, married Latino—she said, “How Presbyterian is this? How cool is it that our Reformed tradition values and promotes such diversity and inclusion.”

As further evidence of what she sees as a “significant moment in the life of our denomination,” Bartel cited the first-time presence of the Rev. Dr. Doris J. García Rivera, president of the Seminario Evangélico de Puerto Rico/Evangelical Seminary of Puerto Rico (ESPR), at the General Assembly this summer, which for her signaled not only the PC(USA)’s “self-awareness of its place in the world,” but also the denomination’s increasing efforts to become more global as well as to reach Latin@ populations.

Bartel, who resourced the Assembly Committee (14) on Theological Issues and Institutions, said that this trajectory became increasingly clear to her as she witnessed the committee’s desire to bring before the entire Assembly its recommendation to approve a revised covenant between the PC(USA) and the ESPR. 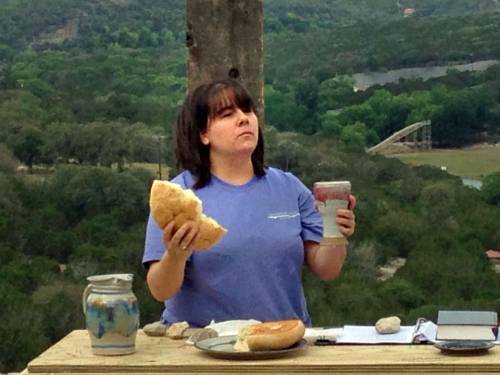 One champion of that effort was the Rev. Lisa Juica, a teaching elder commissioner from Grace Presbytery, who served on Committee 14.

“ESPR’s commitment to theological education and to the PC(USA) are vital to our denomination’s diversity,” said Juica. “One of the questions I often ask is, ‘Who is missing from our conversations?’ It would be tragic to not have ESPR’s voice in theological education. It was a privilege to work through the covenant as a committee member [of Theological Issues and Institutions] and then to vote unanimously to embrace our covenant partnership with ESPR for another ten years.”

Juica, who worked as a licensed medical technologist prior to her ordination, currently serves as the Admissions Associate for Ecclesial Partnerships at Austin Presbyterian Theological Seminary, where her ministry of five years explores the partnership between churches and those called to serve the church. Although she was not the committee member who moved that the approval of the covenant be removed from the consent agenda in order that it—and ESPR’s president—could come before the entire assembly, she immediately supported the motion.

“If you were to ask many of the General Assembly commissioners if they knew of a relationship between the PC(USA) and a seminary in Puerto Rico, they would have most likely said no,” Juica said. “When I first began my work at Austin Seminary, I was unaware that ESPR existed. Because of this, it was important to highlight to the denomination the continued work of ESPR and our continued support and embrace of diversity, not only in our denomination but also in theological education. It was important that every commissioner, visitor, and live-streamer hear that ESPR is a part of the PC(USA)’s work in theological education, and we are truly blessed to have ESPR training pastors and future leaders of the church.”

Following the General Assembly, García Rivera—who was installed in September 2014 as the ESPR’s first woman president—expressed thanks for the PC(USA)’s “wholehearted welcoming.”

“This, my first Assembly, was extraordinary,” García Rivera said. “As I see how you struggle with difficult issues such as divestment, changes to the Constitution, openness to diversity and the new young and intercultural communities seeking to honor God, I felt honored to belong to the Presbyterian family. Change doesn´t come easy to any institution or structure nor the challenge to respond to the Spirit. And yet, you are not only discussing possibilities but also seeking paths to recreate yourself in Christ to become a church relevant for this time.”

Affirming her commitment to seek greater engagement with the PC(USA), she continued, “As the Seminary itself moves to new unchartered territory, reaching out to serve our Presbyterians brothers and sisters through—distance education, medical tourism, programs for lay leaders and spiritual renewal—we thank God that you are there to accompany us.”

Another example of theological education’s commitment to diversity and to training diverse leaders is the Programa de Certificado en Ministerio at Austin Seminary, which began in January 2016.

“As theological education shifts to support and embrace diversity more, Austin Seminary heard the need for a Spanish-language Certificate in Ministry,” Juica said. “As I have worked with the Latino/a ministers and congregation members, I have heard the need for us to have Certificate in Ministry taught in English and Spanish. As my Latina colleague serving as a Commissioned Ruling Elder of a multi-ethnic congregation said, ‘Don’t assume we want everything in Spanish or in English. Give us all the options.’ Austin Seminary is therefore doing the work of equipping diverse leaders of the church through both the Spanish and English Certificate in Ministry programs.”

Ruling elder Vilmarie Cintrón-Olivieri, a member of the First Spanish Presbyterian Church of Miami who holds a Master’s degree in education, said that although she has not herself been a student at ESPR, “I’d like to think I’ve benefited from the education received by those who have and are equipping and educating the people in the pews.”

Cintrón-Olivieri, who currently serves as clerk of the executive committee of the Hispanic Latino Caucus, Synod of the South Atlantic chapter, is a former member of the PC(USA)’s Committee on Theological Education (COTE). COTE is an advocate for theological education, seeking to support seminaries—both financially and in other ways—and to strengthen them for their mission to the whole church.

She emphasized that in advocating for broader outreach in its theological education initiatives, members of ESPR’s faculty have made themselves available for conferences, preaching, and workshop opportunities. “The most recent example, for those of us who are part of the Hispanic Latino Caucus of the Synod of the South Atlantic, is the leader’s retreat last May, when ESPR professor, Rev. Dr. Agustina Luvis, was the keynote speaker.”

According to Cintrón-Olivieri, the vast majority of the Presbyterian pastors serving the PC(USA) in Puerto Rico are graduates of ESPR. “In the same manner, ESPR graduates have served or are serving in different ministries in the PC(USA) across the nation and abroad, including worshiping communities, seminaries, as mission co-workers, on GA committees and commissions, and in the national offices in Louisville and at the Board of Pensions,” she said.

García Rivera concluded her post-General Assembly statement by saying, “The national crisis we now face after the approval of PROMESA [The Puerto Rico Oversight, Management, and Economic Stability Act] and its impact upon Puerto Rican families, compromise the dreams we are weaving together with the presbyteries of the island and with others in the U.S. from coming true…As we walk in uncertain terrain, your company in support of our ministry and the Presbyterian Church in Puerto Rico is welcomed…We do not know the future, but we do know that a powerful and merciful God walks with us all! This is our time to give powerful witness.”