Register today for the June 23 (2pm EDT) online Matthew 25 event that will look at hunger and food insecurities.
Make A Donation Click Here >
Home › Evangelical Seminary in Matanzas trains students for integration of theology and life

Despite many challenges, seminary has endured and thrived

Matanzas, Cuba—Refusing to succumb to political upheaval, economic uncertainty or mass emigration, the Evangelical Theological Seminary at Matanzas, Cuba has remained open and focused on preparing the next generation of ecumenical leaders.

October 1-4, a large contingent of current and former students, faculty, staff and faith leaders, celebrated 70 years of continuous operation at the seminary. 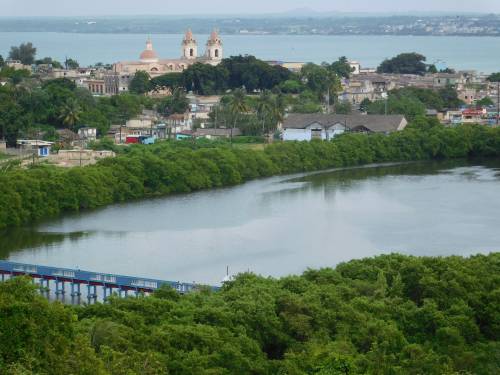 The view from the seminary campus at Matanzas. Photo by Kathy Melvin.

Although normalization of diplomatic relations between the U.S. and Cuba began last July, Presbyterian World Mission began preparing to send mission co-workers two years earlier. Last fall, David Cortes-Fuentes and Josey Saez-Acevedo became the first Presbyterian mission co-workers sent to live and work in Cuba since the 1959 revolution. David was invited by the seminary to teach New Testament and Greek and Josey is serving at the invitation of the Presbyterian Reformed Church of Cuba to work in Christian Education.

Although the doors have never closed, the seminary has adapted. In 1961-62, 80 percent of the students left when Cuba declared itself an atheistic society. Rev. Dr. Ofelia Ortega Suárez, the first woman ordained in Cuba and president of the seminary from 1996-2004, said in 1984, they had 4 graduates, 2 were from Angola. The campus was virtually empty. “There was a 180 degree turn in the 1990s between the state and religion that provided a tremendous infusion of new professors and students,” she said. 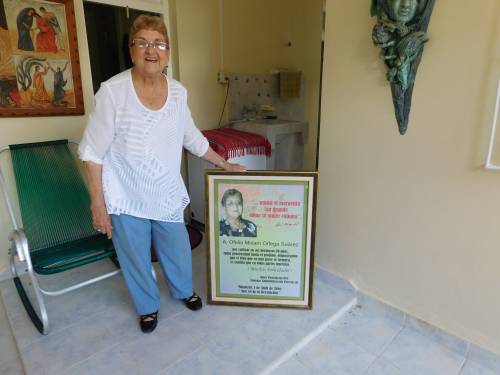 Rev. Dr. Ofelia Ortega Suárez was the first woman ordained in Cuba and president of the seminary from 1996-2004. Photo by Kathy Melvin.

Dr. Ortega Suarez, now 80, said when she entered the seminary only men could study theology. Women were only allowed in the Christian Education program because they did not ordain women at that time. She led the charge to change that.

Today the seminary’s mission is “promoting experiences that allow for transformation of church and society in the obedience to the reign of God and God’s justice.” In the past two years, the seminary has enrolled more than 500 students across all programs and has added several distance programs in recent years for lay leaders in Cuban churches. Additionally, they offer religious studies degrees, in conjunction with the University of Havana, in a country where the study of religion has not been offered for decades. There are now residential, non-residential and distance learning students enrolled in theology, religious sciences and special programs such as prison chaplaincy and biblical and theological training for lay people.

The seminary is involved in both social and community projects in Matanzas, in which students participate. Sitting high on a hill above the city the campus has terraced organic gardens it shares with the community. It’s seen as a permanent integration of theology and life.

The small campus has dormitories, a dining hall, classrooms and a library, nestled into an intentional space of tranquility. One student said, “This aids in our study and in our formation, as human beings.”

The seminary‘s goal is to raise $53,000 for the 2017 budget to cover funding priorities such as increasing the number of computers and printers in the library’s computer laboratory, funding internet access for the campus, publishing seminary publications adding distance lay leader degree programs taken to several sites around the island, fully funding a master’s degree in theology and the Pentecostal studies program.

To support the work of the Evangelical Theological Seminary in Matanzas, Cuba, go to https://www.presbyterianmission.org/donate/E862510/.