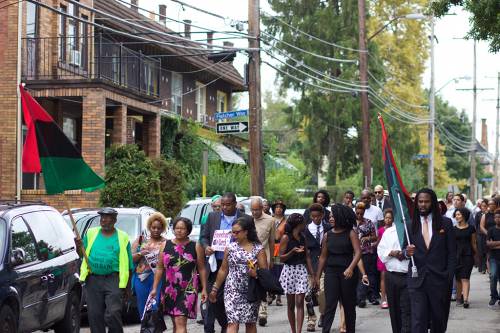 Dina ‘Free’ Blackwell leads a freedom march through the Homewood neighborhood of Pittsburgh prior to her husband’s funeral service. (Photo by Abby Thornton)

PITTSBURGH – Family and friends of the Rev. Eugene “Freedom” Blackwell took to the streets of Pittsburgh’s Homewood neighborhood for a freedom procession from the local high school to the House of Manna worshiping community where funeral services were held for Blackwell. A standing room only crowd honored the gifts Blackwell shared with the people of his community in a going home celebration. Blackwell died August 29, 2016 of bone cancer at the age of 43.

Blackwell was an advocate for justice in Pittsburgh and in the Presbyterian Church (U.S.A.) His ministry was known for crossing boundaries—of races, denominations and theologies. Names and labels didn’t contain him. He was both pastoral and practical with a special heart for serving Christ in the Pittsburgh neighborhood where he was born.

Pennsylvania State Representative Ed Gainey said Blackwell was out on the street most every day, seeking to put a word in the heart or a skill in the hands of those he came in contact with. Pittsburgh’s mayor Bill Peduto emphasized that Blackwell focused on the promise of Homewood, a distressed community, and not the problems. He remembered that as the House of Manna worshiping community served and grew, it hired people from the neighborhood, trained them and put them to work.

“Some of those people he hired stood on the street corner wearing their tool belts after work. Why? Because they were proud. Freedom helped to give them self-esteem. My friends, that is how you build a community,” Peduto said.

Blackwell was also celebrated for co-authoring the 222nd General Assembly overture “On Taking Specific Action to Address the Worsening Plight of the African American Male.” The overture calls for the creation of programs that disciple, educate and help black men to rise up in five cities—Pittsburgh, Charlotte, Baltimore, Cleveland and New York. Blackwell travelled to Portland in June to encourage the Assembly to pass the pilot program that mirrors the work he did in his own neighborhood. 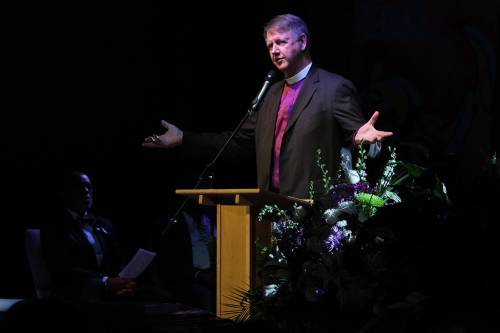 Sheldon Sorge, general minister to Pittsburgh Presbytery, said Blackwell called upon all Presbyterians to rise to the occasion of working for justice.

“Freedom has called the church to rise up, not as a free for all, but for freedom for all. Today we remember that Freedom is rising,” Sorge said.

Blackwell’s friends recalled his humility and his passion.

“When I visited with him in the hospital, he kept asking about me and my church. That’s the kind of guy he was,” said the Rev. Shanea Leonard, pastor of the Judah Fellowship, a 1001 New Worshiping Community. The Rev. Carmen Cox Harwell, pastor of St. Marks Presbyterian Church in Cleveland remembered some theological disagreements, but also a lot of love.

“Sometimes he could be a thorn in my side. On some issues we did not agree, but in Christ we agreed. He was a good brother with a good heart,” she said.

In his eulogy, the Rev. Dr. Johnnie Monroe, moderator of the Synod of the Trinity, used the story of Moses and Joshua to remind the congregation that God’s work will continue despite Freedom’s death.

The Rev. Susan Washburn is interim editor of Presbyterians Today.