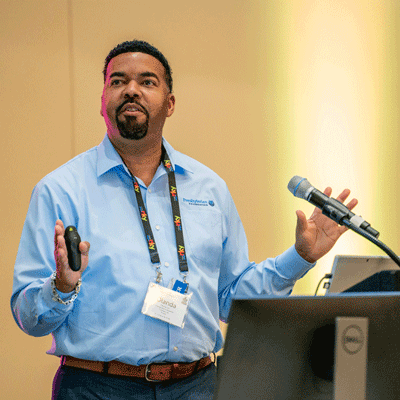 CINCINNATI — Church leaders often say they want their church to have an endowment.

And while that’s good, churches need to be prepared to dig a little deeper and answer some core questions as they establish an endowment, says Olanda Carr Jr., Senior Ministry Relations Officer for the Presbyterian Foundation.

“Endowments are permanent funds established from irrevocable gifts,” Carr says. “When I tell you that our oldest endowment goes back to 1821, that gives you a sense of the longevity of an endowment.”

Carr was a workshop speaker at Stewardship Kaleidoscope, an annual conference focused on stewardship, generosity and finances for churches. It was held both virtually and in person in the Cincinnati area Sept. 13-15.

Endowments do not need additional maintenance or work on the part of the donor, Carr says. “Once they go through the set-up stages and the initial gift, the donor is done,” Carr says. “They’ve made the gift. Then it becomes the receiving institution’s task to determine how to govern the funds.”

What makes a donor want to create or support an endowment? There are three things that motivate donors, Carr says.

The last item on the list points the way to solid policies and procedures that govern an endowment program. “One of the reasons you create endowment policies is that is shows the congregation you know what you’re doing,” Carr says. “The majority of the congregation will never read it. Just knowing that you have it is enough.”

A church’s endowment policy should govern how the congregation spends funds, how it invests the funds and how it grows the funds.

For spending the funds, you want to define how much will be taken out of the endowment each year and spent, which is called a spending formula. Typically, a church might spend 4% of an endowment fund. The fund’s balance is calculated from the average of the previous 12 quarters. In many cases, there is also an 18-month lag.

The 4% spending rate preserves the principal of the fund so that amounts can be withdrawn every year and spent for the church’s needs. Averaging the balance over the previous 12 quarters provides smoothing, so that in times of market turmoil, the amount doesn’t fluctuate as much. The 18-month lag allows for the church to know how much they will receive and when so that they can plan.

Selecting a program to support in the church requires some thoughtful discussions; flexibility is important, Carr says. If there is something your church is particularly known for or something the donor wants to support, these are valid, but keep those concepts flexible. While the donor may love the handbell choir, and it may be tempting to say that’s what the fund should support, consider that in the future, there may not be a handbell choir. Instead, think more broadly, such as music ministry or even worship.

Communicating what the endowment supports back to the congregation is helpful, Carr says, as it motivates more people to give. “The best story to tell is how the church uses the funds from the endowment for the church,” he says.

An investment policy will indicate how you want the funds to be invested, which can include socially responsible investments that are consistent with Presbyterian Church (U.S.A.) values. (These are offered by New Covenant Trust Company, a subsidiary of the Foundation.) Additionally, the policy should define criteria for measuring performance of the portfolio. Make sure that your investment policy and spending formula align, Carr says.

Gift acceptance policies will dictate what kinds of gifts the church will accept, and which they will not. Churches sometimes find themselves the recipients of property that turns them into a landlord, Carr says, which the church may not have the energy and time to manage. Other gifts may be too cumbersome to handle, such as the valuation and sale of an expensive piece of art. A gift acceptance policy also dictates what will happen to the gift once it is received, and what happens to the proceeds of the gift. Decide what your church is willing to handle and create a policy that reflects it. This will help your congregation avoid disputes later.

Additionally, have a conflict-of-interest policy that determines who at your church can make decisions about investments and when they must step aside.

With all policies and procedures, keep the pastoral leadership involved. “Some finance committees believe the pastor should not be involved; however, pastors are normally the person that a church member will go to if they want to leave a large gift,” Carr says. “The pastor needs to be able to speak intelligently about it. They need to know where the information is and lead the member to it.”

For more information on legacy giving, planned giving, endowments and church finances, reach out to your Ministry Relations Officer for the Presbyterian Foundation. You can find yours here.

Robyn Davis Sekula is Vice President of Communications and Marketing for the Presbyterian Foundation. She is a ruling elder in the PC(USA). You can reach her at robyn.sekula@presbyterianfoundation.org.