Aponte will assume his new role as dean on June 1 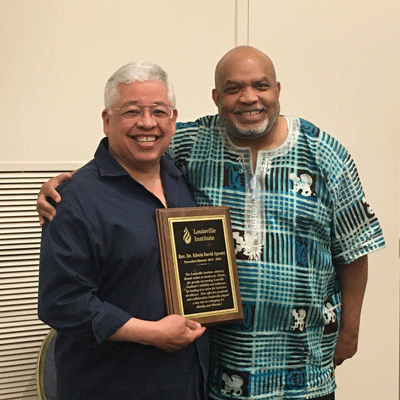 The Rev. Dr. Edwin David Aponte, at left, was honored Thursday during a gathering at Louisville Presbyterian Theological Seminary. Among those celebrating Aponte’s seven years directing the Louisville Institute was the president of LPTS, the Rev. Dr. Alton B. Pollard III, at right. (Photo by Emily Enders Odom)

LOUISVILLE — A host of ministry colleagues and friends gathered Thursday at Louisville Presbyterian Theological Seminary to honor the Rev. Dr. Edwin David Aponte and his wife Laura and to thank Aponte for his outstanding leadership as executive director of the Louisville Institute as he departs for a new position at Drew University in Madison, N.J.

Aponte, a teaching elder in the Presbyterian Church (U.S.A.), leaves the Louisville Institute after seven years to serve Drew as the new dean of its theological school. His term will begin on June 1.

“This was a calling for us to come to Louisville, Kentucky, to serve the Louisville Institute,” Aponte told the gathering. “After having previously served for two terms on the Institute’s Advisory Board, which I thought was one of the best things I’ve ever done, I knew there was a time when that would come to an end. Little did I know that I would be invited back to serve as executive director.”

The Louisville Institute, funded by the Religion Division of Lilly Endowment Inc., “awards grants and fellowships to those who lead and study North American religious institutions, practices, and movements, advancing scholarship to strengthen church, academy, and wider society.”

In addition to his work with the Louisville Institute, Aponte, a graduate of Gordon College, Gordon-Conwell Theological Seminary and Temple University, also served as a research professor of religion and culture at Louisville Seminary.

The Louisville Institute’s website describes Aponte as a cultural historian who explores faith, spirituality and culture, especially within Latinx religions, African American religions, race, ethnicity and religion, and religion and politics. He is the author of “¡Santo! Varieties of Latino/a Spirituality” (Orbis Books, 2012) and the co-author of “Introducing Latinx Theologies” (Orbis Books 2020). Aponte also taught history of Christianity and congregational studies at Perkins School of Theology of Southern Methodist University. Previously he was executive dean of Palmer Theological Seminary of Eastern University, vice president for Academic Affairs and dean at Christian Theological Seminary, and vice president of Academic Affairs and dean at Lancaster Theological Seminary.

As a minister member of Mid-Kentucky Presbytery, Aponte served on its Church Growth and Transformation Committee.

“Ed was a valuable member of our committee,” said the committee’s chairperson, the Rev. Tara N. Reck, pastor of Anchorage (Kentucky) Presbyterian Church. “His insights and wisdom were very helpful as our committee was formed, as we identified marks of vital congregations, and worked with leaders of new worshipping communities.”

The Rev. Dr. Alton B. Pollard III, president of Louisville Seminary, presented Aponte with a plaque. “I am so very grateful that you came this way, my brother,” Pollard told Aponte.

The plaque, dedicated to the Rev. Dr. Edwin David Aponte, Executive Director 2015-2022, reads: “The Louisville Institute Advisory Board wishes to thank you, Edwin, for greatly increasing Louisville Institute’s visibility and influence by leading it to strive for inclusive excellence. Your effective prophetic and collaborative leadership played a key role in reshaping its identity and mission!”

Commending his colleagues on the small staff of five, Aponte said, “You do the work of the Louisville Institute. In this world where there is so much evil, so much wrong, even in theological education, together we have had the opportunity to show that things can be done in a different way — in a way that shows that the ways of God are different than the ways of the world.”

As he leaves the Louisville campus with gratitude, Aponte looks forward to continuing to do transformational work in theological education at Drew, which has its roots in the United Methodist tradition.

“In the work that is before me at Drew, I will be able to do that work because of Louisville Seminary and the Louisville Institute,” he said.