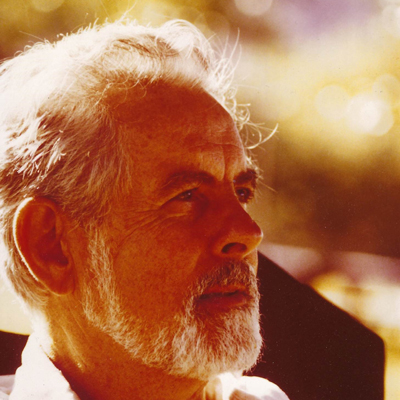 Born on September 6, 1926, in Tulsa, Oklahoma, he grew up in Harrisonville, Missouri. Upon graduation as valedictorian of the class of 1944 of Harrisonville High School, he entered the United States Navy and was trained as an aviation electronic technician, completing training the week that the Second World War ended.

He enrolled at William Jewell College in Liberty, Missouri in the fall of 1946 and graduated as president of the Centennial Class of 1949. He also served as commander of the Beta Xi Chapter of the Sigma Nu Fraternity, was chosen as one of five members of the Aeons Honor Society, and won national honors in debate and extemporaneous discussion.

In September 1949 he entered Yale Divinity School. Raised as a Southern Baptist, he was licensed to preach by the First Baptist Church of Harrisonville. Having been denied any opportunity for summer field work by the Missouri Baptist Convention in 1950, he instead was posted as a summer intern to the Presbyterian congregations in Greenwood and Hartford, Arkansas, by the Board of National Missions in the Presbyterian Church in the U.S.A. At the request of the session of the Greenwood Church, he agreed to remain for an additional year, during which he joined that congregation and went under care of Fort Smith Presbytery as a candidate for the ministry. At Yale Divinity School, he was awarded the Mersick Prize in Preaching.

During the Christmas holiday in 1952, Lewis was invited to visit the First Presbyterian Church of Springdale, Arkansas, a redevelopment project of a church that had been closed many years before and was in some turmoil. He was issued a call to serve that congregation and arranged to leave Yale a term before graduation in order to do so. He was married on Palm Sunday, March 29, 1953, to his college sweetheart, Winifred June Bainbridge, in the First Methodist Church of Liberty, Missouri and ordained and installed as pastor of the Springdale Church by the Presbytery of Arkansas on April 5, 1953, serving also as one of the pastors of the Ozark Larger Parish.

During his five-year pastorate in Springdale, the membership of the congregation grew from 53 to 157. Active in community affairs, Lewis and his wife organized and led the Springdale Youth Canteen and a successful effort to build a community swimming pool. Their daughter, Melinda, was born on January 19, 1956.

When the Presbytery of North Arkansas was established, he served as its first moderator and was a commissioner to the 1956 General Assembly in Philadelphia. He served as Chair of Evangelism in the Synod of Oklahoma-Arkansas and organized a synod-wide pastoral exchange for an evangelistic preaching mission. After the 1954 Supreme Court decision ruled that segregation in public education was unconstitutional, Lewis was instrumental in organizing Arkansas Citizens for Orderly Compliance, was elected an officer of the Arkansas Human Relations Council, and was active in support of the desegregation of the Central High School in Little Rock. He also participated in the Department of Social Education and Action consultations in Philadelphia on denominational response to the widespread defiance of the desegregation decision.

During the 1950s, the Board of Christian Education of the Presbyterian Church in the U.S.A. established and operated two churchwide educational programs, Church Officer Training and the Nature of the Ministry. He was invited to become part of the leadership for each of these, which included orientation visits to Atlantic City, New Jersey, and service on leadership teams in several of the regional events.

In that era, agencies of the General Assembly maintained regional offices, and Lewis was invited to serve as Western Area Secretary for Evangelism from 1958-60, from the San Francisco office, organizing training events and visitation evangelism programs.

He was one of the denominational representatives to the Interfaith Conference on Religion and Race in January 1963 and served as a member of the Presbyterian Council on Religion and Race and its staff after it was established by the 1963 General Assembly. He was also one of the denominational representatives to the National Council of Churches National Conference on Church and State in 1964 and served continuously afterwards on the Interfaith Committee on Religious Liberty, including as its chairperson until 1990. Lewis also chaired NCC consultations on Domestic Hunger and Poverty and on Child and Family Justice and served as chairperson of the ecumenical programs that followed each. He participated in the 1963 March on Washington and served on the Board of the National Organization for Women.

Continuing involvement in community affairs, Lewis was elected a Democratic ward committeeman, initiated the Whitemarsh Valley Fair Housing Council and was one of the leaders of Project FREE, a movement to integrate housing on the Philadelphia Main Line. Granted a sabbatical leave by the Board of Christian Education in 1967, he and his family spent six months studying and visiting in Mexico and Latin America, including periods with Ivan Illich and Paolo Freire.

Invited by the Board of Christian Education to become secretary of the Office of Church and Society on January 1, 1968, Lewis continued in that ministry through various organizational changes for 20 years, serving as the Secretary of the Ministry Unit on Church and Society of the Program Agency, the Director of the Advisory Council on Church and Society and Associate Executive Director for Social Witness Policy of the General Assembly Mission Council, retiring as the merger between the northern and southern streams of Presbyterians took full effect on January 1, 1988. Among the many annual policy recommendations to the General Assembly managed during those years were three that established ongoing mission programs: the Presbyterian Peacemaking Program, the Presbyterian Hunger Program, and Committee on Mission Responsibility Through Investment.

Having served continuously since 1958 on the Ghost Ranch Program Advisory Committee, after retiring Lewis served as the volunteer founding Program Director of Ghost Ranch from 1989 to 1995. He organized a mission visit by the Presbytery of Santa Fe to the Presbyterian-Reformed Church in Cuba in 1990 and facilitated a partnership agreement between them in 1991, serving as the chair of the Presbytery Cuba Work Group. Following participation in a 1995 Partnership Consultation in Havana, Lewis organized the Presbyterian Cuba Connection to foster communication between the two denominations and raise funds to support the life and mission of the Cuban Church, serving as the executive secretary and making over 40 visits to Cuba in a 25-year period. Lewis organized the November 2000 Celebration of Mission in the New Millennium in Cuba, which marked the beginning of the Presbyterian Cuba Partners Network, and served as the network convener until 2013.

After moving to New Mexico in 1988, Lewis also served as chair of the Special Committee on Peacemaking of the Presbytery of Santa Fe and in leadership of the Jicarita Cluster of Presbyterian churches in the mountains of Northern New Mexico for many years as moderator and secretary.

Lewis was preceded in death by his brothers Robert and James; two sisters, Shirley and Janice; and his first wife, June Bainbridge, lost to cancer in 1987. He is survived by his wife, Marianne Ryer, married at Ghost Ranch in 1992; daughter Melinda (Eric Mattson); step children, Rachel Ryer and Paul Ryer (Kelly Rider); and step grandchildren Danica Riedel , Liam, Martin and Timothy Ryer. His ashes will be scattered on Ghost Ranch and at the Evangelical Theological Seminary in Matanzas, Cuba. A memorial service will be scheduled at a time and place to be decided.

Editor’s note: The family of the Rev. Dean Lewis submitted the above obituary to Presbyterian News Service. On June 17, the Presbyterian Historical Society published a remembrance of some of Lewis’ extensive body of work. Read the PHS story here.