Lobby Day starts with a public witness at the office of Sen. Mitch McConnell, includes meetings with legislators and staff 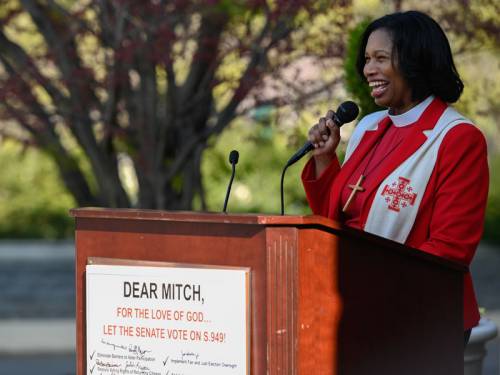 WASHINGTON — President Donald Trump was not the first leader to use tweets, the Rt. Rev. W. Darin Moore told a crowd Monday from the steps of the United Methodist Building, across the street from the U.S. Capitol.

“I have come to let you know that there’s a spirit of Trumpism that has been a part of the human experience,” said Moore, chair of the National Council of the Churches of Christ in the USA. “But every time, God has raised up a people to resist, to protest and to cause trouble in the face of the enemy.”

The crowd of more than 100 people before him stood ready to join the ranks of those people on Lobby Day, the culmination of Ecumenical Advocacy Days. On Monday, the participants in the four-day social justice training conference went from the meeting rooms of an Arlington, Virginia, hotel to senatorial and congressional offices surrounding the Capitol to urge their elected officials to take action on voting rights in the United States and human rights abroad.

“This is what it’s all about,” the Rev. Dr. Leslie Copeland-Tune, director of Ecumenical Advocacy Days for Global Peace with Justice, said of Lobby Day.

The game plan for the day calls for conference participants to go to meetings that have been arranged with their hometown legislators — senators and congresspeople — or their staff and appeal to them about issues that the Advocacy Days committee representing nearly a dozen denominations has agreed on.

“It can be very intimidating to go talk to members of Congress and their staffs,” Copeland-Tune said. “What we’re wanting people to do is go speak from their own understanding of the issue and how it’s impacting where they live and their community, or people who they know.

“We’re all experts, and that’s the position we want to go from. There’s a lot of power that you get, and you feel powerful after you do it. You think, ‘Wow, that wasn’t so bad.’ ”

But before the small meetings started, leaders of Advocacy Days wanted to make a statement, which is why a crowd gathered in front of the Methodist Building, the only nongovernmental building on Capitol Hill, at 9:30 a.m.

All weekend at Advocacy Days, participants had been signing a petition to Senate Majority Leader Mitch McConnell (R-Kentucky), calling on him to allow a vote on S. 949, a bill that has already passed the House of Representatives as HR 1 and calls for the extension of voting rights. McConnell has refused to bring the bill to the Senate floor for a vote, at one point calling it the “Democrat Politician Protection Act,” saying the proposed reforms favor Democratic politicians. 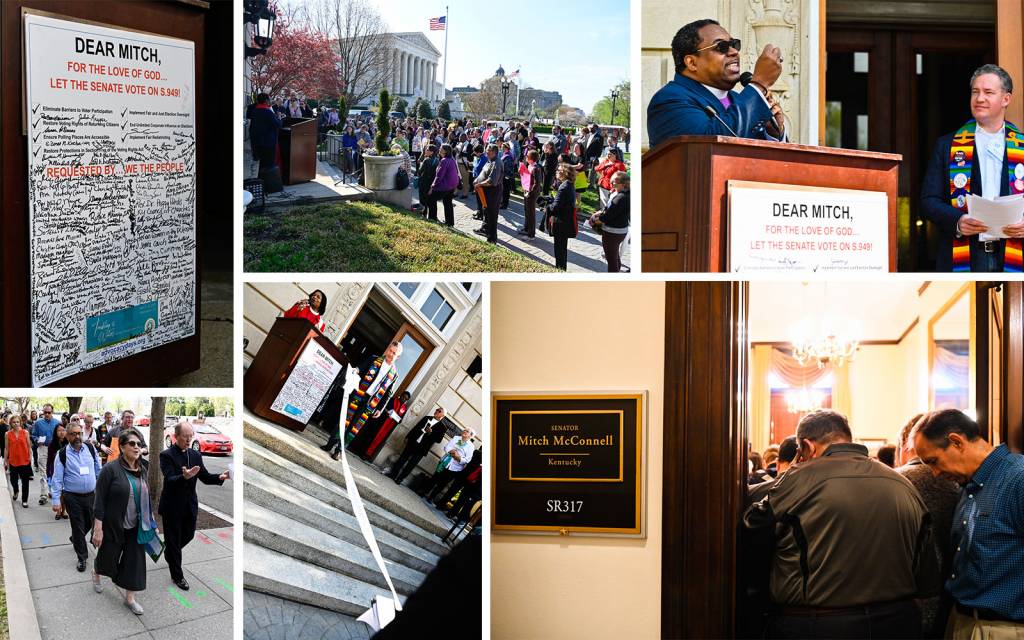 At workshops and talks over the weekend, participants learned about historic and current voter suppression efforts, including closing polling places and intimidation, which have a disproportionate impact on people who are poor and people of color.

So the Monday morning plan was to rally, and then march a block to the Russell Senate Office Building, where McConnell’s offices are on the third floor, to deliver the petition, including a large board that read, “Dear Mitch, for the love of God, let the Senate vote on S. 949.”

During the day, conference participants went to McConnell’s office in shifts to pray for the issues at hand, the senator and his staff.

Following speeches by a number of Advocacy Days leaders, including Copeland-Tune, more than 50 participants marched down Constitution Avenue singing the spiritual “Wade in the Water.” After checking through security, they took the stairs to the third floor humming the spiritual, went into the reception area of McConnell’s office and presented the petition, led by the Rev. Kent Gilbert, president of the Kentucky Council of Churches.

“Since we have everybody here, we’re trying to have a moment of public witness. This is who we are; this is what we stand for. We’re people of faith, and this is what we’re working on together,” Copeland-Tune said.

Rev. Michael Neuroth, policy advocate for international issues in the United Church of Christ’s Justice and Witness Ministries’ office in Washington, led the witness with Gilbert and Copeland-Tune. “Just humming in the halls as an act of prayerful resistance, saying we’re here, we’re claiming our faith in the midst of this place, was powerful,” he said.

The leaders of the witness, which packed McConnell’s office and overflowed out the door, said the staff was polite and listened and accepted the petition and said they would give it to the senator. The leaders of the group added that the staff seemed a bit surprised by the length of the petition, which at the earlier rally bounced down the United Methodist Building steps as it unrolled.

“Since Mitch McConnell either makes the way or is in the way of every law debated by the Senate, bringing faith voices to the table on behalf of the least represented and most vulnerable people is what our Jewish colleagues and friends call a ‘mitzvah,’ a blessing to us but also a sacred obligation,” Gilbert said. “Troubling the waters on their behalf and with the many faithful people gathered here has been a true mitzvah this week.”

Gilbert also led a later meeting in McConnell’s offices with two members of the senator’s staff. The majority of the meetings are with staff members as opposed to the legislators themselves. Leaders of Advocacy Days and leaders at the Presbyterian Church (U.S.A.) Office of Public Witness in the United Methodist Building say that meetings with staff can be as fruitful as meetings with legislators, since staff often play a key role in shaping legislators’ agendas.

In the McConnell meeting, a dozen conference attendees from Kentucky, representing numerous faith traditions, exchanged pleasantries about the state and extended thanks for McConnell’s work, including help for military families and help ordering disposal of chemical and nerve agents stored in Berea, where Gilbert lives.

Then they got down to the asks across a large conference table in a long meeting room with high, brick-red walls. Several members of the group told stories about personal experiences with voter suppression, and all advocated for the need for open, free and fair elections as a benchmark of democracy. If McConnell could not support 949, Gilbert asserted, some legislation protecting voting rights was necessary, considering numerous instances of voter suppression around the country.

The group also brought up the two international issues on the Advocacy Days agenda: the Global Fragility and Violence Reduction Act, which would require the U.S. government to work on strategies to reduce violence and conflict at the root of global crises, and legislation to create a human rights commission in the Senate. Participants agreed that the representatives were attentive and responsive to the presentation.

“What I constantly try to remind myself of from Ephesians 6:12 is we’re not wrestling against flesh and blood,” said the Rev. Denise Anderson, coordinator of the Presbyterian Church (U.S.A.) Office of Racial & Intercultural Justice. “We’re wrestling against principalities and against systems. I think that the posture and attitude of so many who participated in witness here today has been one of restoring humanity to people and remembering that we’re talking to human beings; we’re appealing to human beings.

“What I saw in there and what I saw in visits to my senators was an appeal to that humanity, because at this point, I don’t know what else works.

“The attitudes are really different when you are given the opportunity to write him a message that was anonymous that you didn’t have to attach your name to, but then going to visit his staff, there’s something humanizing about that. That’s why they’re so effective. That’s why in community organizing, you have one-on-one relational meetings: You cannot caricature someone who’s sitting right in front of you; at least, it’s a lot harder to do.”

Another group that did get to meet their actual legislator was a Louisville, Kentucky, contingent that met with 3rd District Representative John Yarmuth (D) in his office, which included work from Kentucky artists and a countdown clock to the Kentucky Derby.

The “asks” weren’t as intense, as Yarmuth was already part of the House majority that passed the voting rights bill, and the human rights commission was strictly a Senate issue. But he expressed interest in looking at the Global Fragility Act and talked to the contingent about other issues.

As with McConnell’s staff the group stopped before leaving to take photos, with plans to post them later on social media, thanking the legislator and/or staff for their time and attention. Back at the United Methodist Building, participants returning from meetings with their legislators turned in report sheets about how the visits went and what they felt they could expect from them.

“This is just the start,” Copeland-Tune said of the participants’ Advocacy Days work. “Now they need to take it home and keep the energy going.”

Next Year’s Ecumenical Advocacy Days will be April 17–20.

Showing ‘what advocacy is’ keeps Presbyterians coming back to Washington event