The first full day of Ecumenical Advocacy Days (EAD) kicked off Saturday morning with a plenary session titled “Racism, Class & Power.” The two-hour session outlined two key issues that advocates would go to Capitol Hill on Monday to discuss with their state representatives: voting rights, specifically the reauthorization of the Voting Rights Act and corporate domination, or opposition to the Trans Pacific Partnership (TPP) trade agreement. 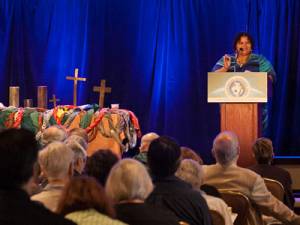 Ashindi Maxton, and independent strategist in democracy reform, racial justice and education took the stage as the first of three speakers. Her varied background includes philanthropy work in investment and funding strategies, policy work for the NAACP and SEIU, the country’s largest labor union and strategy creation for donor alliance organizations, including a reflective democracy project geared toward electing leaders that reflect the true demographic of the United States.

Maxton began by saying she was pleased to speak with people willing to talk about race, class and power, and told the group they were “game changers” for combining their faith with social justice. Her presentation focused on what’s been called the crown jewel of civil rights legislation, the 1965 Voting Rights Act. While portions of that legislation are permanent, there are special provisions that require reauthorization, such as Section 5 which requires specified jurisdictions to obtain permission before instituting changes to voting practices. In 2013 the Supreme Court struck down Section 5, which allows certain states to change election laws without advance federal approval.

She shared several stories where states took advantage of the court’s decision in order to increase barriers to voter registration. These include Texas, where law requires one get deputized in order to register voters, the use of provisional ballots (that ultimately get thrown out), long voting lines, misleading robo calls and onsite intimidation by “poll watchers.” Maxton acknowledged that voter ID laws are a smart voter suppression tactic, citing Washington Post research which found only 31 instances of duplicate voting attempts out of a billion ballots investigated, negating one of the main arguments for voter ID proponents. 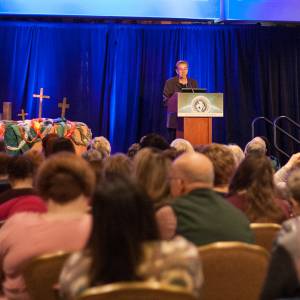 Sorenson called on the group to restore the breach in the voting rights amendment act, stating, “If voting is truly at the heart of our democracy, we are in critical condition. As people of faith we have a pivotal role to play, we care and we need to care because every person is a child of God.”

Sorenson shared the story of Rosanell Eaton, who first voted in 1942 at the age of 21, but is now the lead plaintiff in an NAACP lawsuit against the state of North Carolina. Eaton has a current North Carolina driver’s license, but the name on her birth certificate and her voter registration card do not match her license. The lawsuit states that Eaton will incur substantial time and expense to present an acceptable government-issued ID at the polls, a new state requirement. Before the Supreme Court eliminated Section 5, North Carolina was required to prove that changes to the law would not discriminate against voters. 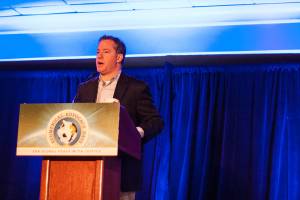 Michael Neuroth presents on the TPP at EAD 2016. —Courtesy EAD

Following Sorenson to speak about the Trans Pacific Partnership agreement was the Rev. Michael Neuroth of Justice and Witness Ministries at the United Church of Christ. Calling TPP the largest trade deal “you’ve never heard of,” Neuroth noted that the agreement has been negotiated in secret for the past seven years. The lack of transparency, at the expense of labor and environmental—even Congressional—eyes, suggests a heavy corporate influence. The text of the TPP has since been released, and Neuroth itemized the harmfulness of its contents:

Neuroth closed by encouraging participants to share their faith values when meeting with their representatives.

Ecumenical Advocacy Days is a yearly gathering of the ecumenical Christian community that culminates in Lobby Daywhere participants mobilize to advocate Congressional representatives on a variety of policy issues.