Keeping our stories top of mind can aid the process, APCE speaker says 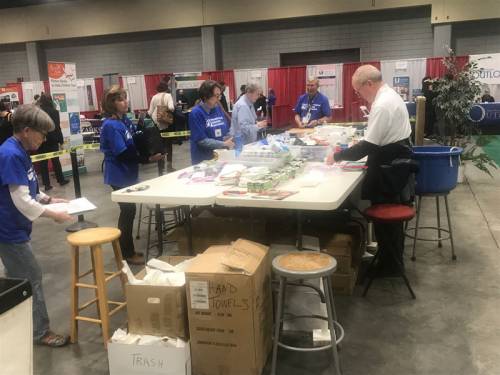 Those attending the annual gathering of the Association of Presbyterian Church Educators inspect hygiene kits that Presbyterian Disaster Assistance provides to people in need. (Photo by Mike Ferguson)

LITTLE ROCK, Ark. — Mission statements are common among Presbyterian Church (U.S.A.) churches and mid councils. The problem, according to the Rev. Dr. Theresa Cho, is that they usually don’t “tell us how to go about” the mission.

Cho note that in his 2012 book “The Advantage,” author Patrick Lencioni said organizations should parse their mission statement into six questions:

That last question is the most important, Cho said. Often it doesn’t get answered.

Jesus answered all six questions in the first 11 verses of Luke 10, the portion of Scripture on which Cho has been concentrating while preaching and teaching at the gathering. It’s the account of Jesus sending out the 70 in pairs to the towns he planned to visit.

We exist, Jesus says, to share the good news that the kingdom of God is coming. What we do is to reciprocate peace and remain with people, healing and feeding them. We know we are living in congruence with why we exist when lives are changed and transformed, she said.

Cho has served her current church for 16 years, as an associate pastor, then as co-pastor and, for three months now, as solo pastor. For a few years before he finally did it, her fellow pastor had talked to her about his plan to retire, which made her anxiety skyrocket. Why?

“I never figured out the question of whether I felt called to be a pastor or not,” she said. The way she lives her life, she said, is “I just happen to do things,” including attending seminary.

“I grew up in a church that said women can’t be in leadership,” she said. The only way to test that was to study for herself, which she did at McCormick Theological Seminary. Following graduation, “I went back to what I’d been doing, teaching children with autism,” she said.

“Would they let me be their pastor?” if her colleague did in fact retire, she wondered. “I had internalized the fact that I wasn’t a tall white male. I couldn’t be that kind of a pastor, and something within me told me I couldn’t be a pastor.”

Then something struck her: it was at the red doors of the church — the threshold — where she felt most comfortable, in “that in-between space where people feel anxious. That’s where I felt most comfortable. I have lived my whole life in between, between American and Korean culture.”

From that threshold, she thinks of her first-generation immigrant parents. “There are no greater risk-takers than immigrants,” Cho said, to applause. “Jesus says to leave everything behind. They actually do that, with no promises or guarantees it will pay off.”

She concluded she was “created in the threshold, the in-between, for such a time as this. I am the perfect leader for this congregation at this time.”

Over the past few months, she said, church members have been encouraged to tell the church’s stories on a variety of topics, including love, origins, food and comebacks.

One that drew a laugh Thursday is the fact that one of the sets for the 1993 film “So I Married an Axe Murderer” was St. John’s Presbyterian Church.

After the gathering, Cho said attendees should consider taking “moments around tables sharing your story and hearing stories from others. It’s the way we are truly changed and transformed.”