The Rev. Ron McKinney emphatically answers the question, ‘How can we sing the Lord’s song in a foreign land?’ 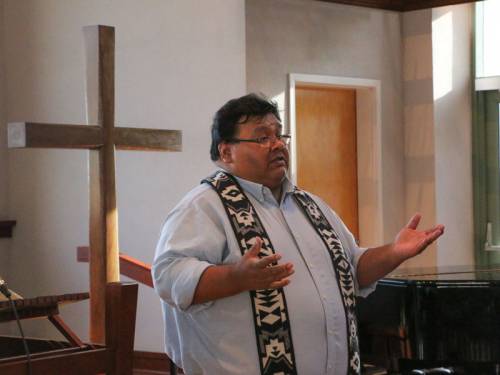 LOUISVILLE — To the psalmist’s question “How can we sing the Lord’s song in a foreign land?” the Rev. Ron McKinney had a ready answer Wednesday during an online Chapel service for the national staff of the PC(USA): “How can we as Native Americans not sing our song? We are not in a foreign land. We are in our own land.”

McKinney, a retention technician in Student Support Services at Haskell Indian Nations University in Lawrence, Kansas, used the words of lament found in Psalm 137:1-4 for his scriptural basis during a service he led two days after Indigenous Peoples’ Day.

McKinney, a member of the Choctaw Nation who’s also the moderator of the non-contiguous Dakota Presbytery, relayed a story from the presbytery’s closing worship last weekend, a service highlighted by the baptism of a young boy. As worshipers were singing “Jesus Loves Me” in the Dakota language, McKinney invited the father to carry his son throughout the congregation so the child might receive blessings from those gathered.

“Old and young, some lifelong followers of Christ and others new to the faith — all reached out to place a hand on the child, shake his little hand, or pat him on the head,” McKinney said. “Some of our elders said a few words of blessing, offering prayers for this little boy. As they made their way to the front, I thought someday, this child will run up and down the aisles and be involved in youth programs. I thought he might become an elder, a commissioned ruling elder or a teaching elder in Dakota Presbytery. Maybe someday he might even be moderator of Dakota Presbytery.”

“As [father and son] completed the journey, it was emotional for me seeing people reach out to bless this child. I thought, this child will be the carrier of our faith, hymns and language, carrying traditions to the next generation,” McKinney said. “With a shaky voice I reminded the congregation that we are here today because somebody prayed for us. Today we have the responsibility to pray for this young man and others like him.”

McKinney said he thought about Native hymns as he sat on his sister’s back porch in South Dakota last weekend, listening as the birds sang. Those going into Babylonian captivity as depicted in Psalm 137 “sat by a river while they remembered and mourned the loss and destruction of their land, the deep sorrow and longing for what once was,” McKinney said. “They were appalled their captors asked in mirth for them to sing a song of Zion.”

“I thought about the hymns we love. They are powerful medicine for our weary souls,” McKinney said. Native hymns “connect us with the past, with those who lived through unimaginable atrocities designed to eradicate us as people.”

“But we are still here, and we still sing our songs,” McKinney said. “Sacred sites, lands and rivers are still here, but are oftentimes not accessible to us. These sites and locations that once bore our traditional names now bear the names of early explorers who discovered them. When combined with other microaggressions and actions, they build on each other.”

Native people “may live in the poorest areas of the country and our churches may be falling to pieces around us, but we will continue to sing the songs that have sustained our people through the generations,” McKinney said.

After delivering his sermon, McKinney prayed the Lord’s Prayer in the Choctaw language, inviting those in worship to offer their own prayer in the language closest to their heart. He closed worship by singing “The Christian’s Resolution,” a hymn Choctaw people sang as they were being removed from their traditional homelands in the early 19th century. They sang this hymn “in the morning as people gathered and prepared for the day’s journey,” McKinney said, explaining the first verse reminds the singers to have faith in Jesus Christ, while the second verse speaks of God searching for the people.

“We are precious in God’s sight, the God who makes us one of his own,” McKinney said.