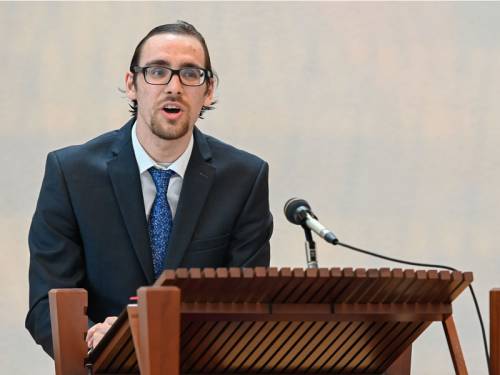 Henry Koenig Stone preached from Isaiah 58 Wednesday in the Chapel at the Presbyterian Center. (Photo by Rich Copley)

LOUISVILLE — While Presbyterian Church (U.S.A.) churches and mid councils do the work suggested in Matthew 25, they might consider taking their cue from Isaiah 58 as well.

“Is this not the fast that I choose: to loose the bonds of injustice, to undo the thongs of the yoke, to let the oppressed to free, and to break every yoke?” God asks the nations through the prophet. Those who feed the hungry and satisfy the needs of the afflicted will “raise up the foundations of many generations” and will be called “the repairer of the breach, the restorer of streets to live in.”

God’s call is juxtaposed “against the fake news of a self-righteous nation,” Henry Koenig Stone said during the Chapel worship service Wednesday at the Presbyterian Center. Stone is managing editor of  “Unbound,” the journal of Christian social justice, and associate for young adult social witness for the Advisory Committee on Social Witness Policy.

The current public narrative has a “1984” ring to it, he said: war is peace, freedom is slavery, and ignorance is strength. Speaking up against policies rife with nationalism — “as if they were a nation that practiced righteousness” is how Isaiah put it — can even today get a person labeled a communist or an enemy of the people, or at least un-American.

“We have the knowledge and the power and the energy needed to change the narrative,” he said. “But too often we just don’t take the risk. … We can’t afford to stand on the political sidelines any longer.” 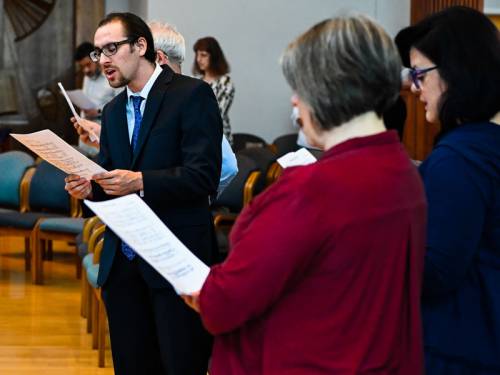 Henry Koenig Stone and fellow worshipers sing his original hymn, “Unbind the Shackles,” during the service Wednesday in the Chapel at the Presbyterian Center. (Photo by Rich Copley)

Stone put Wednesday’s Scripture to music, applying the words of Isaiah 58 to his original melody and calling the hymn “Unbind the Shackles,” which worshipers sang Wednesday.

“Unbind the shackles of the human nation,

Repair the breach, and rebuild the streets;

Nearer to justice us nearer to me!”

The final two verses of “Unbind the Shackles”:

“Look to the poor, the hungry, and the lonely;

Not out pity but from human likeness

find that communion you dare!”

“Looking inside we find that we are broken,

yearning to be made whole;

In this mission of our Savior’s Justice

we find a common role!” 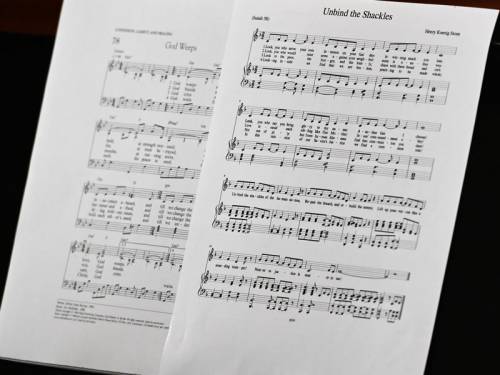 “Unbind the Shackles” by Henry Koenig Stone is based on Isaiah 58. (Photo by Rich Copley)

“Fighting for the soul of the nation,” Stone said, “really means having a more secure sense of self that’s able to be open, compassionate and loving.”

Following his sermon, Stone offered up a prayer, including this petition: “Help us gain energy from your work, O God, which moves us ever closer to justice.”