Christmas Joy Offering – Supporting our leaders: past, present and future.
Make A Donation Click Here >
Home › ‘Doing the work we were called to do’ 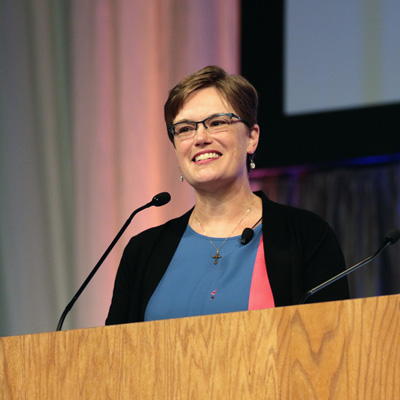 LOUISVILLE — “We have seen a vision for what can happen,” the Rev. Dr. J. Herbert Nelson, II told the Presbyterian Mission Agency board last week, “and we are beginning to live into that possibility.”

Nelson, Stated Clerk of the General Assembly of the Presbyterian Church (U.S.A.), and the Rev. Cindy Kohlmann, Co-Moderator of the 223rd General Assembly (2018), spoke to the board about some of what they’ve experienced during the last few months, which Nelson called “truly a time of some significant transition in the life of this denomination — and it feels good.”

Nelson said if Presbyterians are at least in part prepared for all the change going on, it’s “because we are faithful, not because we know all the answers … I feel that energy when I go out to our congregations. I see people trying to figure this out every day, walking by faith and believing God will make a way somehow.”

Kohlmann offered up a brief travelogue of her many stops over the nine months or so since her June 2018 election along with the co-moderator, Ruling Elder Vilmarie Cintrón-Olivieri. Kohlmann’s habit is to slap a travel sticker on her suitcase to celebrate each place she goes, and space is at a premium: to date, she has represented Presbyterians in four countries and at eight national gatherings, two seminaries and about 15 mid councils.

Some moments have been sobering.  Cintrón-Olivieri stood at the mass grave site of unidentified, would-be immigrants who died trying to reach the United States. Together with the Rev. Jimmie Hawkins, director of the Office of Public Witness,  Cintrón-Olivieri and Nelson were among those to speak about their reactions to visiting the site in Brooks County in South Texas.

“We are seeking better immigration laws. There is so much sorrow and so little hope,” Kohlmann told the board. “Yet we are there as the hands and feet of Christ, living into being a Matthew 25 church.”

Kohlmann said a trip to Kenya and Liberia taught her many things — among them, just how bumpy roads can be.

“You know the road is bad,” she said with a smile, “when your Fitbit tells you you’ve taken 10,000 steps and you’ve been sitting for four hours.”

Not only is the Presbyterian Church of East Africa working to end the forced marriages of girls, the church in that part of Africa is reaching out to people with hearing loss: Kohlmann said two young women were signing an entire church service that she attended.

“We are doing the work we were called to do,” she said.

Kohlmann said she tries to write something of what she’s learned every day, posting her experiences to Facebook and other social media.

“This is an amazing, exciting time to be the PC(USA),” she said. “We are being blown, like it or not, into new waters. We are being exhorted, despite what we might wish, to be a Matthew 25 church — and to be a church that in tangible ways loves our neighbors.”