Make A Donation Click Here >
Home › Do the queer community and the church need each other? 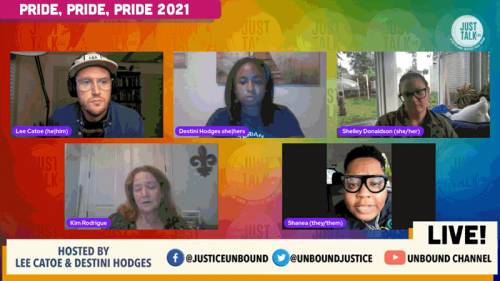 Just Talk Live will focus on Pride Month in June during each Tuesday broadcast at 6 p.m. Eastern Time. (Screenshot)

LEXINGTON, Kentucky — Do people in the LGBTQIA+ community need the church? Does the church need people who are LGBTQIA+?

“I think the church needs queer people, more than queer people need the church,” the Rev. Shanea D. Leonard said, being the first to field the question during Tuesday afternoon’s episode of “Just Talk Live.”

Leonard, the Associate for Gender & Racial Justice in the PC(USA) Office of Gender, Racial & Intercultural Justice, pointed to the history of queer people in the church, out and not, in the formation of such mainstays as Gospel music and the civil rights movement.

“I read the question, ‘Why does the LGBTQ+ community need the church?’ and my knee-jerk reaction is to say they don’t, they don’t need the church,” said the Rev. Shelley Donaldson, associate pastor at First Presbyterian Church in Stamford, Connecticut. “Look at the history. The history is that the church has been harmful. And I know that there were times where I wanted to walk away. There were times I tried to walk away. And I came back, one time after a year of therapy, of figuring out what was right for me.

“I think of it, in a sense, like a marriage. I don’t need to be married to my wife, but I’m a better person when I’m with her. And so, in a sense, I do need to be with her because I’m the best version of myself. And so, I think the church needs the LGBTQIA+ plus community, because if the church really wants to live into the fullness of God, of really embracing all of God’s Creation, then the church needs the LGBTQIA+ community. But, you know, the queer community has existed without the church for a long time. And so, I don’t know that I can honestly say that the queer community needs the church.”

The Presbyterian Church (U.S.A.) has been on a long journey with the LGBTQIA+ community from, like most other churches in the Western world, rejecting homosexuality to being one of the most affirming denominations in the United States through a series of General Assembly policies that have, among other things, allowed the ordination of LGBTQIA ministers, elders, and deacons and approved clergy to perform same-sex weddings. While these affirmations are not yet accepted in all PC(USA) congregations and mid councils, they are the position of the national church which has a full-slate of virtual events celebrating Pride this month, including a series of discussions all month on “Just Talk Live,” the Presbyterian talk show produced by Unbound: An Interactive Journal of Christian Social Justice.

Click here to watch the ‘Pride, Pride, Pride’ episode of ‘Just Talk Live’ in its entirety

The Rev. Kim Rodrigue, recently retired and based in New Orleans, has lived that change, ordained in 1987 and coming out at 36 when she fell in love with a woman. She recalled pastoring a church in Washington, D.C. in the years after that.

“Pride in D.C. happened about a mile, a mile-and-a-half from the church I served,” Rodrigue recalled. “The church wasn’t safe at the time, but I could walk around Capitol Hill and go to Pride, fully confident I wasn’t going to run into people from my church and feel like it was a place that I could be less scared, that my wife and I could be a couple.

“The experience that sticks with me, that was foundational for me, was that Pride is over here, and the church was over here, and the safest thing to do was to keep those things separate, and I feel like we’re still figuring out how to bring them together.”

While the upcoming episodes of “JTL” will focus on aspects of faith and Pride, such as The Bible and Liturgy, Tuesday’s episode was a broader discussion of Pride and the church. The panelists and co-host the Rev. Lee Catoe said that while it is a much more open time for queer people in the church, there are still many challenges.

Catoe pointed out that in Tennessee, where he lives, the state legislature has recently passed a number of anti-LGBTQIA+ laws, reflecting the actions of state legislatures across the country. Catoe said many of these laws are driven by the legislators’ religious beliefs.

“There’s a whole system that’s trying to shut down trans rights across this country, and it’s happening, and it’s been successful,” Leonard said. “We are still fighting a battle to be accepted and just to live and to be accepted as who we are.”

That is a big part of the reason why the pastors say genuinely open and affirming churches are necessary as they took on a question of churches that may be worried about becoming more welcoming for fear of doing the wrong thing or upsetting members.

“We’re always going to mess it up at some point and get it wrong,” Donaldson said. “I don’t think the biggest problem comes in messing up. I think it comes in afterwards, and what do you do about it?

“You know, when you use the wrong pronoun for somebody, don’t just pretend it didn’t happen. But say, ‘Oh, excuse me. Sorry,’ redo it, then go on. Correct yourself and move on. I don’t think we’re always going to get it perfect. But we have to try. And at some point, you do have to get it right.”

For resources, Donaldson said More Light Presbyterians is a solid place to go for information.

Rodrigue said speaking with churches that have gone through the process of being more affirming can be helpful. As for concerns about upsetting members, she said, “For way too long, the Presbyterian Church has done a lot from a position of fear that some congregations still have that sense that you know, what if they upset Ethel or Carl?

“But you know, moving beyond being held captive to that kind of nervousness about what if you upset someone is important. Nobody really wants to be part of an institution that’s afraid. That’s not very appealing.”

The episode closed with panelists’ messages to people in the LGBTQIA+ community who may be struggling with faith. Donaldson encouraged viewers to find her on Twitter for a pep talk, and Leonard brought the chat to an exuberant close.

“Be free to be who you are. Christ has called us into a place of freedom. God loves you exactly for who you are, not in spite of who you are. And remember that if your family can’t get with it, you’ve got family, you ain’t alone. You’re not alone, and it will get better.”

Unbound is part of the Advisory Committee on Social Witness Policy, which is one of the Compassion, Peace & Justice ministries of the Presbyterian Mission Agency.