Teamwork benefits the hungry and the environment 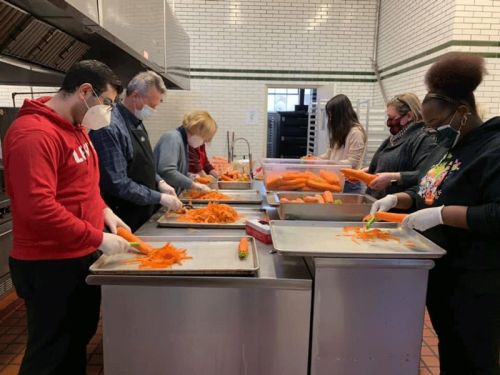 LOUISVILLE — A partnership between Jefferson Avenue Presbyterian Church in Detroit and an organization that works to reduce food waste is helping to feed the hungry while also helping to protect the planet.

Make Food Not Waste, an environmental organization that makes use of donated food, and Jefferson Avenue Presbyterian, a Certified Hunger Action Congregation of the Presbyterian Church (U.S.A.), began working together last year to provide prepared meals to needy Detroiters, including single mothers, older people and the working poor.

“It’s been actually kind of wonderful,” said Mission Committee chair Paul Booker, who helps distribute food and goes every Tuesday and Thursday to wash dishes for the chefs.

He recalls being at a warehouse for another church project when the initial connection with Danielle Todd, founder of Make Food Not Waste, was made last summer. Discussions would eventually lead to a holiday feast for the community.

“She had said to me, ‘What do you think about doing Thanksgiving dinner?’ And I said, ‘Sure, I would be interested.’ I’m thinking a couple of turkeys in the oven, 20-30 dinners and we’re out the door. This is not a big deal,” Booker said. “It turned out to be 1,000 dinners,” serving four to six people per meal prepared by professionals from local restaurants and paid for with grant money from Make Food Not Waste.

“It actually worked really well, and we kind of looked at each other and said, ‘Let’s keep this going,’” Booker said. “So I felt God was putting everything in place.” 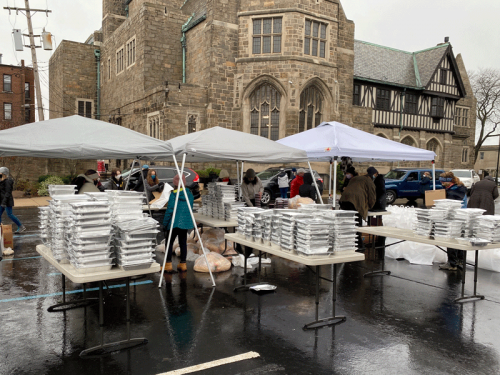 “Here we are: two groups with two different missions that found alignment in a particular time,” said the Rev. Matt Nickel, Jefferson Avenue’s pastor.  “I’m very grateful for the way the church has responded and fulfilled its call.”

The church has been vital to Make Food Not Waste, which acquires food from various sources, said Todd, executive director.

“The ingredients are donated food,” she said. Sources of the surplus items include “urban farms, suburban farms, grocery stores, restaurants, food distributors, backyard gardens. I mean, you name it.” 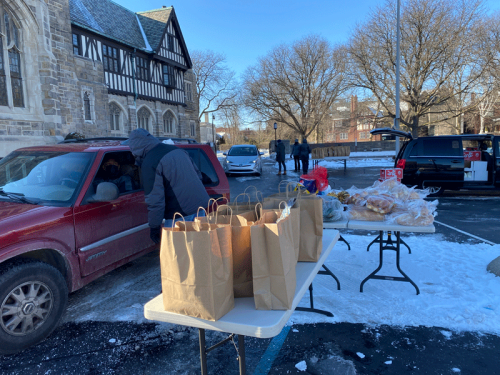 The food that’s distributed by the church and Make Food Not Waste is healthy and delicious. (Photo courtesy of Jefferson Avenue Presbyterian Church)

Now, the partnership has moved into a new phase. “Starting the first week of January, our chefs started preparing meals in the church kitchen in the basement. It’s a beautiful commercial kitchen,” Todd said. “The chefs cook on Tuesdays and Thursdays, and then on Fridays, we invite people from the community to come” to the parking lot to pick up the meals.

So far, “we’re up to about 200 meals a week,” Todd said. That’s equivalent to “about 1,000 servings of meals that go out every week, and we have been doing it consistently. We haven’t missed a week since the beginning of January.”

Booker said volunteers assist with the packing and distributing of the meals, which go out to various agencies and charities as well as to individuals and families. He takes meals to a senior citizen home.  “The gentleman that is the social worker there will call me and tell me how many he needs, and I see that they get them on Friday.”

Nickel, who sees value in connecting worship life with life and relationships in the community, did a sermon series on food and faith, and the church holds forums on topics including food waste. The congregation has also become involved in composting.

Prior to working with Make Food Not Waste, Jefferson Avenue already had been serving the community in a number of ways, including its longstanding tutoring program.

That tutoring program led to a feeding program when people at the church came to realize that hunger was inhibiting some of the children’s ability to learn. To address that problem, the church started providing food to help tide local school children over during the weekend. The church would “drop off 30 bags of packed food for the kids to take home with them,” Booker said. That way, they’d have something “to put in their tummies.” 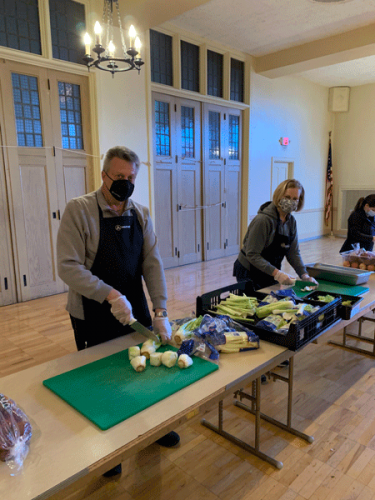 When the pandemic hit, cutting off the church from school personnel who were needed to connect with the school children, Jefferson Avenue began passing out boxes of food from foodrescue.us, which describes itself as an organization that engages volunteers to “transfer fresh food surpluses from local businesses to social service agencies serving the food insecure.”

Then the partnership with Make Food Not Waste came along. The effort has not only benefitted the meal recipients but some volunteers as well.

“This really saved me,” said Booker, who had trouble coping with social isolation brought on by the pandemic. “I hated being home. I hated having nothing to do. I just did not like it,” but this project “gave me a purpose.”

The project also has helped the church be faithful to the Scriptures, including Matthew 25, Nickel said. In that gospel passage, “Jesus says I was hungry and you gave me food. I was thirsty and you gave me something to drink. I was naked and you clothed me. This is the living embodiment of being called to live those Scriptures out.”