Panelists: With instability can come fear 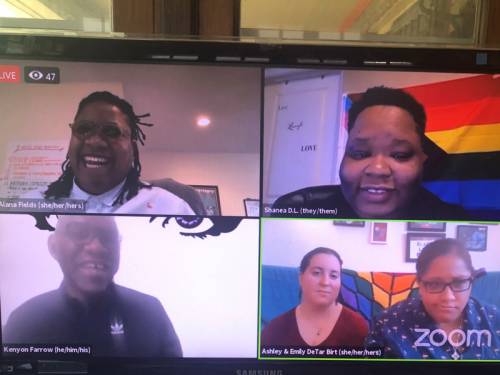 The PC(USA)’s  most recent “COVID At The Margins” episode discussed the impact of the virus on the LGBTQIA+ community. Hosted by Rev. Shanea Leonard, panel members included Alana Fields, Kenyon Farrow and the Revs. Ashley and Emily DeTar Birt.

LOUISVILLE — The third in the series “COVID At The Margins,” a discussion series by the Presbyterian Church (U.S.A.) created to shed light on the disproportionate impact of COVID-19 on communities of color and what the church and people of faith can do to respond, highlighted the impact of the virus on the LGBTQIA+ community.

Hosted this week by the Rev. Shanea D. Leonard, Associate for Gender & Racial Justice in Racial Equity & Women’s Intercultural Ministries, the series is a joint effort of RE&WIM, the Compassion Peace & Justice Ministry and the Office of the General Assembly.

Members of the panel included Alana Fields, a PhD candidate and instructor in the department of sociology at the University of Pittsburgh and a member of Judah Fellowship New Worshiping Community; Kenyon Farrow, senior editor of Body.Com, which is a news and information website, primarily focused on HIV news resources; and the Revs. Ashley and Emily DeTar Birt. Ashley is the pastoral fellow for youth and families at Rutgers Presbyterian church in Manhattan and Emily is the Consulting Minister for the Unitarian Church of Staten Island and Community Coordinator at Not So Churchy New Worshiping Community.

It was noted that not only is housing instability an issue for the LGBTQIA+ community, but joblessness and the kind of jobs and industries they work in also puts them at greater risk for exposure to the virus. Failure from the health community to respond to queer and trans folks along with the lack of training for medical professionals on how to engage with queer trans folks was also called out as another issue for the LGBTQIA+ community.

“I’ve heard of queer folks from across the country where they’ve been  involved with health care workers and have gone to the hospital, the ER, or even their own primary care physician and that person has not been able or quick or educated enough to interact with our community. And I know that’s magnified right now, given the circumstances,” said Fields.

“I think there’s another way it’s speaking to medical concerns that I’ve seen as an editor of a website about HIV,” said Farrow. “When we initially recognized this pandemic in the United States, in late February, early March, we started to get a lot of emails and questions on our social media channels. People were saying, ‘Hey, I’m a person living with HIV … am I more at risk for the coronavirus?’ There’s a lot of panic around this. And while there’s a number of studies at this point, that show that people living with HIV don’t have a higher risk of either contracting or dying from coronavirus there’s a lot of fear.”

“I had an acquaintance of mine here in New York, another black gay man who was 40 years old, to die here in the city of coronavirus in March,” Farrow added. “I later found out that he had gone to the hospital three different times to be seen and was turned away. He ended up dying at home. I think there are compounding dynamics of the things we already know. In the health care settings that black and brown folks, and certainly queer and trans folks, are often not believed when they say that they’re sick and are turned away.”

Farrow says there is fear around the fact that physicians not well versed in HIV may assume that because they are living with HIV, they are more likely to die from coronavirus. As a result, they may be put on a “do not resuscitate” list or are not offered a ventilator because they’re already more at risk of dying. “Some people are really concerned about those things,” said Farrow. “There’s a lot of activists who’ve been working on these issues around health care.”

In addition to the disparities in health care, housing and employment within the LGBTQIA+ community, the panel also discussed the issues and sometimes adverse conditions these individuals endure while trying to shelter in place.

“What does it mean that you’re not supposed to leave your house, but other people in your house aren’t supportive?” said Ashley DeTar Brit. “What’s the one thing that made it possible for you to stay in that house? Your ability to go to the coffee shop or library or the LGBTQ center or whatever it was that was a safe space for you. That’s gone. If somebody is using your orientation or identity to pressure or abuse, you have to get away from that person now.”

Leonard asked the panel to address the issue of younger people, including college students who might be in households that they can’t control who are not safe in quarantine because of their sexual orientation.

“I think it’s important to talk about mental health,” said Emily DeTar Brit. “It’s already difficult for black and brown people regardless of sexuality, but then especially black and brown folks that are queer and trans to find therapists and counselors and psychologists and psychiatrists that are trained specifically to deal with these communities. So then how to do that in a quarantine situation? I know we’re doing the virtual thing now,  but we also have to think about the access people have to things like computers and cell phones and internet connections, to be able to use therapy and get access to mental health services in ways during quarantine is another thing that’s really important to talk about and that’s something I think we sort of missed.”

The next two discussions will be held on June 15 and 16. The series will discuss the impact of the virus on the Latino-a community and the Native American community, respectively. Visit the Racial & Gender Justice web page for more information.