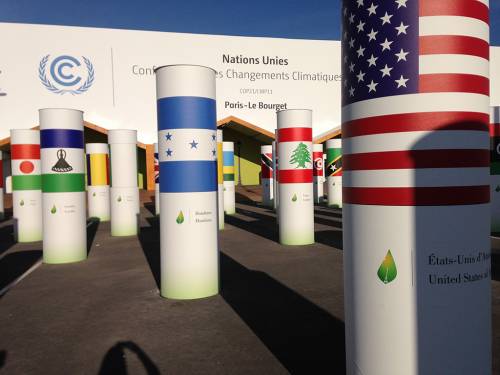 Flags on display outside COP 21 in Paris in 2015. (Photo by Rebecca Barnes)

LOUISVILLE – World leaders and government officials from nearly 200 countries are gathering for the next two weeks in Marrakech for the 22nd Conference of Parties (COP22), part of the United Nations Framework Convention on Climate Change. Negotiators will check progress since last year’s historic Paris Agreement (COP 21), which officially came into force early this month. In addition to the official negotiators, hundreds of representatives from civil society will observe and witness the proceedings, including faith-based organizations such as the Presbyterian Church (U.S.A.)

One of the PC(USA) observers to COP 22 will be ordained elder Bee Moorhead. She is the executive director of Texas Interfaith Center for Public Policy/Texas Impact. The nonprofit religious education project helps people of all faiths in Texas take action on a variety of policy concerns, including how to reduce air pollution and global warming via energy conservation and renewable energy strategies.

Moorhead says expectations for this year’s COP are very different from last year.

“It’s less about making a big statement, and more about the nuts and bolts of implementation. So we expect the negotiations to be very technical,” she said. “I think it’s very important that the faith community stay focused on the big picture, and keep emphasizing that technical implementation decisions have to stay grounded in the ambitions articulated in the Paris Agreement for global cooperation toward a sustainable future.”

At last year’s conference, governments committed to the historic Paris Agreement, which includes a strong commitment to a low carbon future and capping greenhouse emissions, while also naming climate change an urgent concern to be taken seriously at all levels, with particular attention paid to the impact on vulnerable populations.

“I advocate on behalf of faith communities at the state level on a variety of public policy issues, including climate change, so I’ve been following the COP process over the years,” said Moorhead, who attended COP 21 last year. “Being there and especially meeting and listening to people who are already impacted by climate change, helped me to make some aspects of the issue much more concrete for me.”

As a state-level interfaith leader, Moorhead’s role is often to make a “Texas connection” to global issues. “For example, many of the refugees coming into Texas are people displaced by climate-related circumstances, so it’s important for Texans to understand that dynamic.”

Moorhead says she will be focusing on points of attachment for Presbyterians—not just in Texas but throughout the country. Her daughter Oona, a high school senior, is also attending the COP representing the PC(USA).

“I’ve been involved in advocacy related to climate change for her whole life,” said Moorhead. “So she has grown up around the public policy process and is comfortable in that environment.

“Youth are an increasingly important part of the COP process. In fact, November 10 is designated as Youth and Future Generations Day at COP22,” said Moorhead. “There is increasing recognition that today’s youth will be the leaders who have to address mid-century climate issues, and the action steps today’s negotiators agree do, will be up to future leaders to implement.”

Those who follow the work of COP are describing this year’s conference as “the COP of Action.”

Moorhead says it is easy for people of faith to be excited about the statements and grand gestures, but lose interest once the conversation gets too technical.

“But that’s exactly when Presbyterians and other communities of faith need to keep our heads in the game,” said Moorhead. “Like with all public policy, the test of the Paris Agreement will be how well the nations of the world can move from conceptual to concrete.”

Rebecca Barnes, associate for Environmental Ministries in the Presbyterian Hunger Program, attended COP 21 last year along with Bill Somplatsky-Jarman, recently retired coordinator of Mission Responsibility through Investment. She says this year’s conference will be about follow up.

“While this year’s negotiations aren’t as pivotal as last year’s Paris Agreement (COP 21), it’s important that we are still tracking global governmental agreements and progress made on goals,” said Barnes. “For the Paris Agreement to have weight, we must all be working in our cities, countries, and around the world to meet the goals we promised.”

Both Barnes and Moorhead agree there has been an increase in voices from religious communities in the climate movement and that includes the COP process.

“We invite Presbyterians to follow along, as we each consider how to reduce our dependence on fossil fuels,” said Barnes. “As we each do our part to be faithful disciples in caring for God’s creation, we also watch the nations of the world as they make promises on our behalf to reduce global greenhouse gas emissions.”