Christmas Joy Offering – Supporting our leaders: past, present and future.
Make A Donation Click Here >
Home › Continuing a pilgrimage of justice and peace 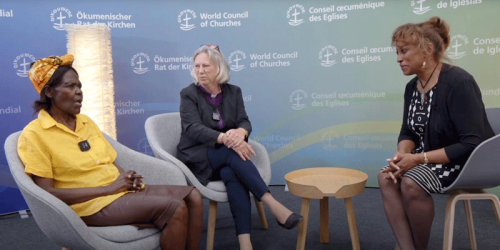 LOUISVILLE — In preparation for the 11th Assembly of the World Council of Churches, Dr. Agnes Abuom, Moderator of the WCC Central Committee, couldn’t help but hearken back to the 10th Assembly, held in 2013 in Busan in the Republic of Korea.

“What imprinted on my mind was the message to be pilgrims together in the pilgrimage for justice and peace. That really resonated,” Abuom said recently during an interview by the Rev. Dr. Angelique Walker-Smith, Central Committee member from the National Baptist Convention, USA, attending the 11th Assembly being held through Sept. 8 in Karlsruhe, Germany. “Being in a divided country, Korea, the whole issue of peace was really critical for me. Just thinking of the militarization in the region — the call for a pilgrimage for justice and peace became so critical for me at that particular time.”

Bishop Petra Bosse-Huber of the Evangelical Church in Germany, moderator for the local host committee, marveled “at the hospitality of the people and the church in South Korea. That was such a great experience for me, and I think for many other people,” she said during the same interview. “The power of the pilgrimage of justice and peace has been with us over the years — and I was so happy to have an African delegate as our moderator,” Bosse-Huber said with a nod to Abuom, who’s from the Anglican Church of Kenya.

“In the last few years, my feeling was many things became worse,” Bosse-Huber said. “We’ve had to face increasing crises, wars, violations of human rights, increasing racism and xenophobia and also the question of gender justice. … At the same time, it was a wonderful experience to be in this fellowship of the Central Committee. We have become closer and have something like sisterhood and brotherhoods with each other.”

Walker-Smith then asked: How do we live in the tension of fragility and hope?

Another of Abuom’s memories from the 10th Assembly is “we cannot as Christian communities address these issues alone.” During the isolation of the pandemic, “interfaith spaces at the local level were difficult. But as the leadership of the WCC and with the help of staff, we did more than normal.” What Abuom called “the intergenerational linkage” that has blossomed and grown over the last two years “was almost propelled by Covid. The young men and young women became the support accompaniers of our pastors to make sure they could continue their ministry — not in the same way, but through technology.”

Along the way, the pilgrimage Abuom described “became an umbrella through which people could fellowship, walk and pray together.”

Bosse-Huber said the German hosts “are so happy that the fellowship of the WCC is now here. We thought it would never happen.”

“I would say it’s a miracle we can come together in Germany,” Bosse-Huber said, “though the pandemic isn’t over.”

She said she and others on the host committee “have been looking forward to meeting real people from all over the world.” Over this weekend, she said, delegates will be “going to [the hosts’] regions and speaking with them, discussing the problems of the world as well as our common beliefs that we share.”

“The German people have worked so hard to bring us here,” Walker-Smith said, “and we’re grateful.”

Members of the host committee and the WCC’s Geneva, Switzerland-based staff “have maintained hope,” Abuom said. “For me the hope that this would happen, however small or big, was so critical to keep up the spirit.”

“Go to the [WCC] website,” Abuom suggested. “You will see how we accompanied each other in the most difficult circumstances [during the pandemic] in the losses of our loved ones, with powerful resources.”

“This Assembly, the 11th Assembly, in Karlsruhe, is the spiritual celebration of life and the importance and centrality of life,” Abuom said. “Friends, let us celebrate Christ and the life-giver.”

Watch the 15-minute interview, titled “From Busan to Karlsruhe,” by going here.