Leaders say they’re disturbed by ‘differences in values and even in facts,’ creating controversy in their congregations 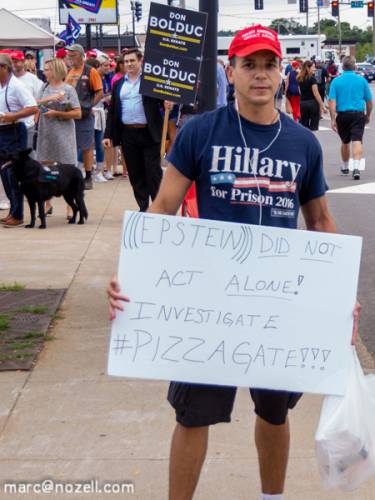 At a PC(USA) congregation in the red part of a blue state, the church secretary believes in the “Pizzagate” Q-conspiracy, which lives on despite being debunked during the 2016 presidential campaign. (Photo by Marc Nozell/Flicker/Creative Commons)

Presbyterian News Service wondered if and how many PC(USA) pastors were dealing with this.  PNS turned to story crowdsourcing, linking this Religion News Service article, which reported on the study, to a social media post for Presbyterian leaders.

One of the first replies came from a UKirk campus minister and PC(USA) co-pastor in the Southeast United States.

“Do you really want thousands of pastors messaging you?” he asked.

We didn’t hear from thousands. But a handful of PC(USA) leaders were willing to talk to Presbyterian News Service about the conspiracy theories they’re hearing in their churches, provided we would identify them only by the state or region they’re serving.

For example, a pastor who serves a PC(USA) congregation in the red part of an otherwise blue state in the Midwest heard the church’s secretary start talking about a pedophile ring in the basement of a pizza place in Washington, D.C. 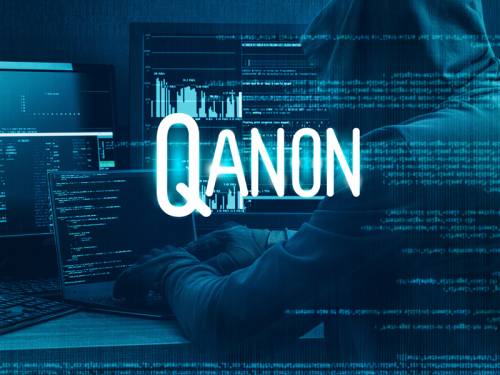 “No,” the pastor said to her about the debunked QAnon conspiracy theory that went viral during the 2016 presidential election. “This has been factually checked, there’s no basement and there’s no pedophile ring.”

Even though the pastor feels like facts don’t matter to the woman, he keeps trying to reason with her. After former President Trump’s second impeachment trial, she kept telling him Trump hadn’t been impeached because he hadn’t been indicted.

When the pastor told her that didn’t matter because impeachment is a legal process — and that yes, Trump was impeached because that was the verdict the U.S. House of Representatives delivered — she wouldn’t listen to him.

“People are not even using the same words anymore, let alone facts,” he said. “Because of COVID this woman has been isolated at home for the last year, listening to the echo chamber on the internet.  It’s like the next video starts playing and if you don’t stop, pretty soon you’re not conversing with anyone else.”

In a PC(USA) church north of Atlanta, a ruling elder said she hasn’t heard any Q conspiracy conversations in the congregation.

But during a Bible study she attended, another woman said that people at Antifa and Black Lives Matter protests were being paid to protest by billionaire philanthropist George Soros.

“We were meeting in person that day,” she said. “Most of us just looked at each other. I thought, and may have said, that ‘I was still waiting for my check to arrive.’”

According to this ruling elder, people in her congregation generally don’t talk about politics. But she sees differences in values and even in facts creating dissension in the church.

“For example, what to do about COVID,” she said. “The people I know to be Trump supporters want to hurry to resume in-person services, while the rest of us do not.”

Other church leaders say they hear conspiracy theories brought up during vaccine discussions — and that mask-wearing continues to create controversy in their churches.

“Those who don’t want to wear masks get very upset about it,” said a pastor in the South.

And a pastor serving a PC(USA) church in New Jersey said she feels like a woman in her congregation is “slipping away” because she gets her news “from alternative sources I’ve never heard of.”

“She told me she didn’t feel comfortable at the church because of its political stance on mask- wearing,” the pastor said. “And when other members talked of getting the vaccine, she said, ‘You need to know what ingredients are in there.’”

Recently when this pastor wrote a newsletter celebrating that COVID numbers were going down, she received pushback. A person who wasn’t a member of the church saw the article and called to tell her that she was completely mistaken — and that polio is still worse than COVID.

Another pastor at a PC(USA) church in the Northeast said when she advocated for every person’s right to vote, she was accused by some in the congregation of being political, because “If more people voted, it would be for Democrats.” 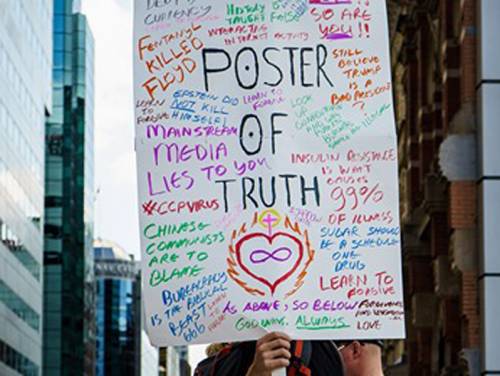 “I actually heard the words, ‘You’re pushing a liberal agenda,’” the pastor said. “If you say certain words like ‘Feed the poor,’ it means you’re a Democrat. If you say, ‘Welcome the stranger,’ it means you’re for people crossing the border illegally. The word ‘justice’ also pushes people’s buttons.”

All of the PC(USA) church leaders PNS talked to are disturbed by what they’re hearing in their congregations.

“Especially from Presbyterians,” said the ruling elder near Atlanta. “We’re supposed to be smart and educated and not so gullible.”

“The presence of conspiracy theorists tends to strain relationships in the congregation,” said the pastor in New Jersey. “People have had a friendship and now this chasm opens up between them. It’s difficult to talk across the gap, so it’s avoided, which creates tension that’s hard to know how to resolve.”

“Yeah, being a quasi-liberal presence in a small church in a small town is a challenge and getting to the point of being exhausting,” said the pastor of the church in the red part of a blue state. “It’s frustrating at times to say anything that comes out of Scripture, because people think it comes from a political party.”

For additional insight into the QAnon movement and how it might affect churches in the future, read this article, in which academics ask, “Will conspiracy theories form the basis of a new religious movement?”