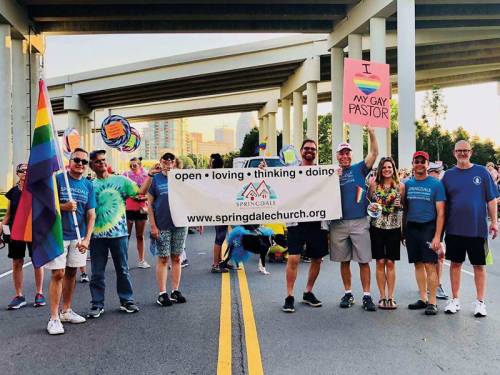 Members and friends of Springdale Presbyterian Church in Louisville prepared to march in a Pride Parade in 2018. (Contributed photo)

LOUISVILLE — I donned a new T-shirt — imprinted with Springdale Presbyte­rian Church on the front and the watchwords “open, loving, thinking, doing” on the back — as I headed out four years ago to walk the eight blocks from my office to the staging area. I was about to march in my first Pride Parade.

Even before installing an openly gay pastor, the Rev. Dwain Lee, in 2016, church members had discussed how to communi­cate to the wider community our commitment to inclusivity. Carrying our banner in the Pride Parade seemed like an effective and fun way to do just that.

Rev. Lee enthusiastically agreed but offered some advice: “We are going to be on LGBTQ+ turf, not the church’s. We don’t get to set the rules, they do.” He cautioned that some might view our participation with skepticism or even be hostile to the presence of “church people” in their midst.

“LGBTQ+ people have come by whatever negativity they have for the church honestly and with good reason. Many, if not most, of us have stories of negative church experiences that would set your hair on end. We need to validate that and allow them their own reality,” he said.

Knowing that parade participants and spectators often dress or behave in ways some find outrageous, we were counseled to consider the context. Yes, some folks would likely be “flamboyant” and go “over the top” to “flaunt” their differences from us. After all, celebrating difference is pretty much the whole point of the parade.

Rev. Lee reminded us that LGBTQ+ people have long faced rejection by both church and society. Some choose to “reject the rejection” by establishing a set of alternative social norms that are often intentionally contradictory to the norms of the groups that rejected them. 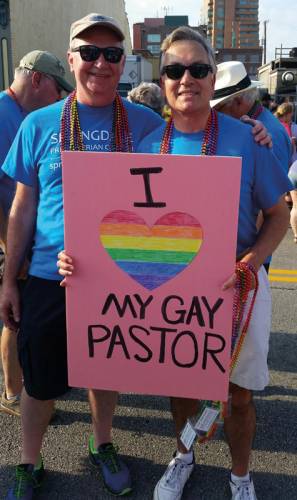 The Rev. Dwain Lee, pastor at Springdale Presbyterian Church in Louisville, at left, is pictured with the author, Scott Furkin, during the 2017 Pride Parade. (Contributed photo)

His points were well taken. Over time orga­nized religion has been especially cruel to LGBTQ+ people, barring them from serving as clergy, refusing to acknowledge their marriages and, in some instances, expelling them from church membership. Thoughtful Christians must recognize their complicity in hurting them and humbly seek to build trust through acts of compassion and repentance.

As Rev. Lee noted, it’s not enough to say, “A lot of churches discriminate against LGBTQ+ people but we’re not like that.” We must also say, “We were wrong, we’re sorry and we’re trying to be better now.”

“Seriously, just ignore them,” he advised. “They’re only looking for attention and they obviously aren’t interested in any meaningful discourse. We don’t have to accept every invitation to an argument.”

I was tested early in the parade. Near the start, just after round­ing the corner from Preston Street onto to Main Street, we encountered a small but vocal group of sidewalk protestors — think of the Westboro Baptist Church folks and their appall­ing “God Hates Fags” rhetoric. As they shouted and waved signs warning that we would all be spend­ing eternity in hell, I flashed my own sign which read, “I (heart) My Gay Pastor.”

What happened next lasted only a few sec­onds but seemed to unfold in slow mo­tion. Apparently, my sign’s message — that being gay and a Christian clergy­man are not mutually exclusive — was too much for one of the protestors. For this nondescript middle-aged man, it was like pouring gasoline on a fire. We locked eyes as he stepped off the sidewalk and made a beeline in my direction. He was just a couple of feet away when, his face twisted in anger, he thrust a Bible toward me and snarled “Satan, I rebuke you! The blood of Jesus is against you!”

My fight-or-flight response kicked in, but I kept marching and my heart rate quickly returned to normal once I realized I was in no real danger. Reflecting on the incident later, I un­derstood that what I experienced in those brief moments is but a taste of the hatred too many LGBTQ+ people routinely face in their daily lives. While the homophobia they endure may be more covert, it is nonetheless painful and wrong. To have it perpetrated against them in the name of God must be especially hurtful. It shows how much work remains to be done in the struggle for LGBTQ+ equality.

Happily, for me and my cohorts, there was no more ugliness on the parade route that day. To the contrary, cheering LG­BTQ+ people and their allies lined both sides of Main Street. The mood was decidedly celebratory and I saw nothing more outrageous than I’d seen before on Bourbon Street during Mardi Gras or the Churchill Downs infield on Derby Day.

It may have been my first Pride Parade but it was not my last. And I still love my gay pastor.