MRTI recommendation moves on to Presbyterian Mission Agency Board next month 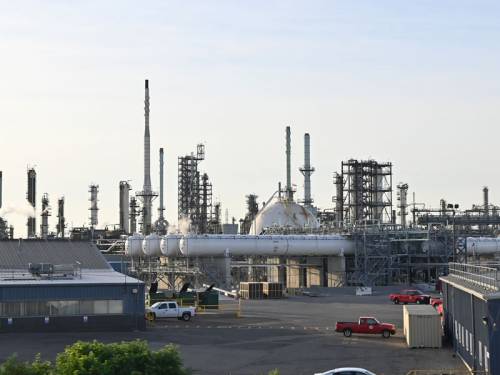 A portion of the Marathon Petroleum refinery in southeast Detroit. (Photo by Rich Copley)

LOUISVILLE — The Presbyterian Church (U.S.A.) took a step Thursday that could eventually lead to divestment from a trio of oil and gas companies for environmental and climate change-related reasons — if General Assembly commissioners agree this summer.

The Presbyterian Committee on Mission Responsibility Through Investment (MRTI) voted to recommend that Marathon Petroleum, Valero Energy and ExxonMobil be added to the General Assembly’s divestment/proscription list because of poor performance on a comprehensive environmental screen established by the 223rd General Assembly in 2018.

Those three businesses landed in the lowest tier of MRTI’s Guideline Metrics. That tier includes companies that may have a poor record of shareholder engagement; a poor record on environmental, social and governance (ESG) issues; and may or may not acknowledge the importance of ESG issues. The latest Guideline Metrics scoring, approved by MRTI Thursday, can be found here.

In the 2019 and 2020 proxy seasons, MRTI attempted to engage and also evaluated companies using its Guideline Metrics in an effort to improve the companies’ governance, strategy, implementation, transparency and disclosure, and public policy with respect to climate change, according to the committee notes in its response to GA referral 08-08. “In the cases of ExxonMobil, Marathon Petroleum, and Valero Energy, this process of engagement produced no substantial change or movement towards compliance with the General Assembly’s criteria established by the 222nd General Assembly (2016).”

Thursday’s vote by MRTI is in response to the 223rd General Assembly Directive on Applying Environmental Policy and Recommending Selective Divestment. To implement this policy, MRTI had to create a set of Guideline Metrics, which were affirmed by the 223rd GA by a 409-106 vote. That effectively created the first-ever environmental screen for the committee, allowing it to clearly communicate environmental expectations.

The GA also directed MRTI to continue working in collaboration with the group Climate Action 100+ to engage in talks with nine companies about concerns related to climate change. CA 100+ is an investor initiative with $41 trillion of investor capital aimed at getting the world’s largest corporate greenhouse gas emitters to take necessary action on climate change.

The committee is concerned about climate change because it is “undeniable” and “one of the most pressing moral and theological problems of our time,” threatening the survival of the planet and disproportionately affecting the poor and people of color, according to its report.

It hopes the three low-performing companies will begin to make changes that mitigate climate change and lead to receiving better scores on the Guideline Metrics.

Between September 2018 and January 2020, MRTI participated in 31 dialogues with eight out of nine companies named by the GA — Marathon declined — and scored each company using the Guideline Metrics. The process leads to a total score that corresponds with a color range of red (the lowest), orange, yellow, blue or green (the highest).

On a scale of zero to 240, Valero scored the worst (77) while Marathon scored 90 and ExxonMobil scored 94, putting them all in the red category.

MRTI recommended Valero be added to the divestment list because “the company has yet to address how climate-related risks will impact operations, does not disclose any emissions, has no human rights policy or indigenous rights policy in place, and has failed to outline the strategic implications of a transition to a low-carbon society,” the committee notes in its report.

In its current stated approach to climate change, ExxonMobil “does not incorporate a commitment to take action to reduce greenhouse gas emissions across the corporation’s value chain consistent with the Paris Agreement’s goals of limiting the global average temperature increase to well below 2 degrees Celsius.”

The recommendation on Marathon follows a June 2019 visit to Michigan, where committee members learned of environmental degradation and environmental racism in the area surrounding the Marathon oil refinery. Marathon also failed to engage in dialogue with MRTI and CA100+.

Thursday’s vote was consistent with MRTI’s decision last fall to agree that any company in the lowest tier would be recommended for the divestment list.

The recommendation will be forwarded to the Presbyterian Mission Agency Board for its review and consideration in February. The full report will be available when the PMAB meeting papers are posted online ahead of the meeting.

Later, the recommendation would move on to the 224th General Assembly, which takes place June 20-27 in Baltimore.

If the committee’s recommendation is approved, the Presbyterian Church (U.S.A.) would be one of the first entities to selectively divest from particular companies for environmental-related policy reasons only, said Rob Fohr, director of Faith-Based Investing and Corporate Engagement for the PC(USA)

If passed by the General Assembly, Marathon Petroleum, Valero Energy and ExxonMobil would be placed on the 2021 divestment list, which would then go to the boards of the Presbyterian Foundation and the Board of Pensions for their review and implementation.