…be led forth in peace. (Isaiah 55:12). Support to the Peace & Global Witness Offering.
Make A Donation Click Here >
Home › Committee on the Office of the General Assembly concludes spring meeting 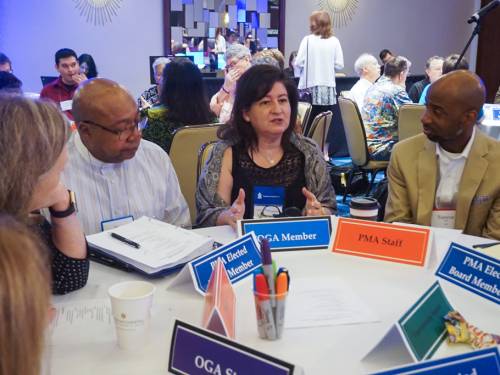 SAN JUAN, Puerto Rico – The Committee on the Office of the General Assembly (COGA) began the third and final day of its March 21–23 meeting “still riding a lovely high” from the previous night’s service of worship,” in the words of the Rev. Wilson Kennedy, COGA’s Vice Moderator.

At that historic gathering on the evening of March 22, hundreds of Presbyterians from across the island of Puerto Rico celebrated worship together with PC(USA) Stated Clerk the Rev. J. Herbert Nelson, II, Presbyterian Mission Agency (PMA) interim executive director Tony De La Rosa, PC(USA) Co-Moderators the Rev. Denise Anderson and the Rev. Jan Edmiston, as well as board members and staff of the Office of the General Assembly (OGA) and the PMA. 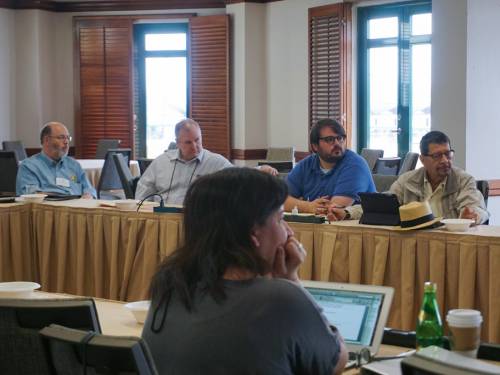 Representatives of the two PC(USA) agencies gathered again yesterday in a different context to undertake the work of the “PMA Coordination with OGA” Ministerial Team of the Presbyterian Mission Agency Board (PMAB), for which Kennedy serves as vice chair. PMAB member Conrad Rocha, a ruling elder from Albuquerque, serves as chair.

After members shared joys and concerns and debriefed for a full hour on the joint “Community Conversations” in which they had engaged on the morning of March 22, the body took an unexpected turn.

Anticipating—and ultimately modeling—the very deliberations in which they would engage, the team departed from its prescribed structure and agenda in favor of being church by fostering relationships and building community.

The team, which was—and still is—expected to do a full exploration of “shared services,” communications, and issues related to per capita dollars, committed itself instead to a process that it believed would more easily facilitate its future conversations.

“It’s important that we get together,” said PMAB member Tamara Williams, Stated Clerk and administrative coordinator for the Presbytery of Charlotte. “It models for the denomination that we’re building community here—that’s what we’re trying to get our mid councils and congregations to do. We’re not just six separate agencies, we have a common focus.”

That members of the agencies’ two boards, PMAB and COGA, do not often meet together, surprised some of the bodies’ newer members.

“I always assumed that COGA and PMAB would have an opportunity to get together and talk about Jesus, faith, mission, the cross, and the good news of the gospel, but apparently that’s not the case,” said the Rev. Eliana Maxim, associate executive presbyter for the Presbytery of Seattle, a COGA member who also serves on the Way Forward Commission. “In worship [last night], everything was built around ‘we are the body of Christ.’ Are we modeling that, or are we a pancreas here and an appendix there? We do need to be the body of Christ. What does it mean for these two bodies to be together and work together?” 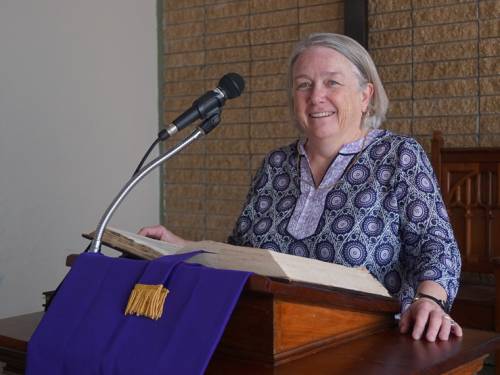 Building on Maxim’s observations, Nelson said that he, too, wanted to have a conversation about Jesus Christ.

“We have been in a framework of lament for so long that we really don’t know how to recognize the joy of the Lord,” said Nelson. “We’ve lost the ability to have a conversation around what it means to serve God. That’s where the challenge is. The bigger picture has been lost and absorbed in the lament of business success. I think we are out of touch—I think we’re lost in what it means to be faithful in our relationships with one another. The challenge for us is to have an honest conversation. We are a corporate model that isn’t serving the denomination. I see so much that this denomination can do and be and become if we first ground ourselves in the joy of the Lord and put the cross back in our theology.”

After calling for a short break, Rocha proposed that the team not break into the two prescribed groups to discuss “shared services” — e.g., finance/accounting, information technology and others — and communications but rather talk about two questions. “If we talk about who we are as the two arms of the General Assembly,” he said, “maybe that will move us into who do we serve and how do we serve.”

What ensued was a rare dialogue — which closed in a circle of prayer led by Nelson — and which Kennedy described in his later report-back as “striking in its raw emotion.”

“[Our conversation] was prophetic in how we relate to one another, not just as PMA to OGA, but as siblings in Christ,” he said. “It beckoned a much more basic question than the one with which we had set out. Three guiding questions became our conversation: ‘Who are we,’ ‘What do we serve,’ and ‘How do we serve.’ The elephants in the room were named. OGA feels like the ‘red-headed stepchild’ and PMA is the ‘whipping boy,’ at fault for every problem in the denomination. In the conversation, we realized that there is real pain here—that the corporate culture has caused a system that is broken. Intentional steps have to be taken to fix that for the sake of Christ’s work in the world today.”

Kennedy reported that at the end of its deliberations the group committed itself to look at the cultures within the Presbyterian Center and the agencies, as well as the much larger systemic issues that have led to what the Rev. Jerry Van Marter, interim communications director for the OGA, characterized as “a gulf between the two agencies.”

“We are hamstrung by the systems that separate us,” said Van Marter, “that get in the way of people working and loving and being disciples of Jesus Christ together.”

The members of the Ministerial Team reached the conclusion that per capita distribution and shared services could only be addressed in light of understanding the culture and the history of these structural decisions. John Wood, director of administrative services for the Presbyterian Historical Society, had earlier repeated what he shared in his March 21 budget update, namely the “unsustainable trend” that 30 percent of total per capita revenue is being allocated to shared services.

As Rocha observed in the morning session, although the group did not discuss per capita, the principal issue on its agenda, “I don’t think we could have addressed it well.”

“This was an amazing conversation,” he added. “How do we make sure we continue these conversations when we go back to the U.S. and keep engaging each other? It must be incorporated into our work. I have taken copious notes and will try to construct a way forward.”

In its fourth and final plenary session, COGA also:

COGA’s next meeting will be held Sept. 19–21 in Louisville jointly with the Presbyterian Historical Society. In order to foster better engagement with the PMAB, a motion was approved that the COGA meeting begin at 9 a.m. Tuesday, Sept. 19, and end at noon Thursday, Sept. 21, if the way be clear, to ensure that the dates of the two board meetings have partial concurrence.