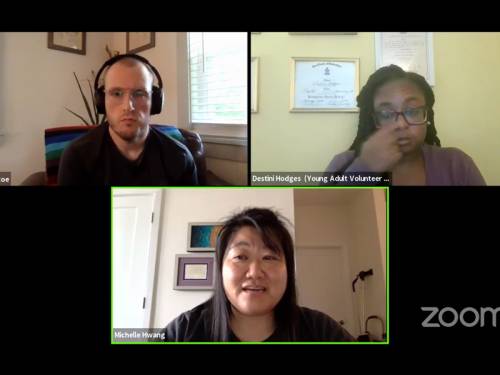 LEXINGTON, Kentucky — The Rev. Michelle Hwang has been out to protest against police brutality and systemic racism in the Chicago area, been inspired by the diversity she sees in the crowd, and comes back home thinking about the Presbyterian Church (U.S.A.).

“We as a church need to stop following, and we need to start leading,” says Hwang, vice-chair of Racial Equity Advocacy Committee (REAC) in the Office of the General Assembly. “We need to show our government what repair and reparations can look like. That would be an amazing testimony.”

Similarly, Madison McKinney of the Advocacy Committee on Women’s Concerns (ACWC), has ambitious goals for the church standing up for women who are Indigenous Americans.

“We have a role we can play, so we should,” McKinney said from her Lawrence, Kansas home, after laying our horrifying statistics about violence against Native American women.

Hwang and McKinney were on Thursday afternoon’s special edition of “Just Talk Live,” an online talk show presented by Unbound, a journal of Christian social witness that is part of the Advocacy Committee on Social Witness Policy. This was the final episode presented during the 224th General Assembly (2020), which continues Saturday.

Like other special editions, Thursday’s episode focused on groups that were supposed to be bringing overtures to GA this year but have had them tabled until 2022 as the assembly is being held completely online due to the COVID-19 pandemic. While their proposals are likely not going to be taken up, the women say they are important to the PC(USA) achieving racial and gender equity and showing the country how that is done.

McKinney painted a bleak picture of the lives of Native American women who are the cornerstones of their communities but are significantly more likely to experience sexual assault or murder than their white counterparts.

“This is something we felt we had to speak out on,” she said. “Again, it’s racism, it’s these systems of oppression, that keep hurting our communities.”

She noted that four out of five Native women are likely to experience some form of violence or sexual assault in their lives, and that tribal courts have limited power to enforce the law, and situations such as missing women are not taken seriously by local, state, and federal authorities. 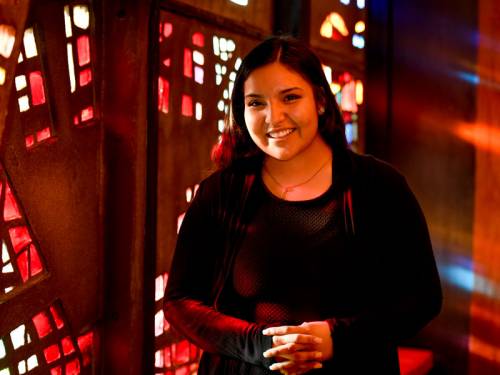 Last year, Madison McKinney helped represent the Presbyterian Church (U.S.A.) at the 63rd session of the United Nations Commission on the Status of Women. (Photo by Rich Copley)

“That alone should be raising a million red flags, but it’s not,” McKinney said. “There are so many gaps in different areas that aren’t addressing these issues. So we wanted as a Presbyterian Church to recommend that we use our platforms through the Office of Public Witness in Washington, D.C. and the Presbyterian Ministry to the United Nations in New York to use our voice and our platform to advocate for change and equity to address these issues that are happening.”

Before each General Assembly, Hwang said REAC visits an area of concern to learn more about what is needed. That led the group to El Paso, Texas and Juarez, Mexico, where the team learned about challenges facing migrants coming to the United States and settling in, particularly within the church.

Even more striking was a church they visited and “the ability for that congregation to be nimble and pivot quickly when the need arose.” She noted that the church in question turned its education building into housing for migrants.

Among proposals REAC has for General Assembly are making migrant pastors and congregations full members of the PC(USA) as opposed to fellowships, moves that she says will shift the makeup of the 90% white denomination.

An area where she said the church can really lead the nation is reparations, certainly a hot-button issue in racial equity discussions.

“We need reparations for our siblings, now — not yesterday, not tomorrow, not ‘let’s create a task force’; we are saying, now,” Hwang said. “These white churches that were built by enslaved Africans on land that was taken from the Native peoples, this needs to be made right. This needs to be repaired.”

The committee’s proposal, she said, is that as churches close, money from sales of land needs to go to Black and Indigenous communities.

“Where we always see a threat is in money and power,” Hwang said. “If we are truly going to be this denomination that is prophetic and calls Jesus Christ as our Lord and Savior, this is a must.”

Lee Catoe, who co-hosts the series with Destini Hodges of Young Adult Volunteers, punctuated each guest’s segments with a call to viewers who, like him, are white.