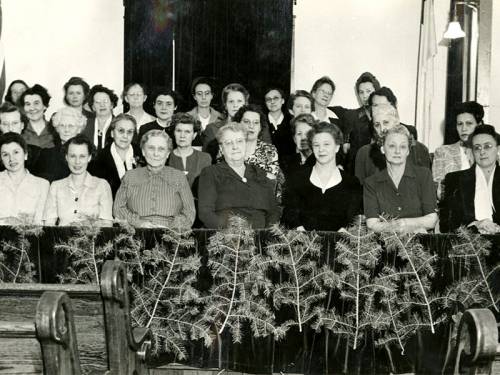 LOUISVILLE — “The 20th-century history of Presbyterian women’s organizations is a rich and varied one, and it is a history that has been well documented by women themselves. There are stories of prayer groups and sewing circles, building programs and annual conferences, campaigns for the dignity of minority women and friendships with missionaries from around the world. There are reports of women being uplifted, educated, and freed from isolation through the Presbyterian Women’s organization network of mutual support and caring.” — Rev. Joan C. LaFollette

In 1924, Ila Earle Fowler (1876-1963) of Lexington, Ky., was appointed the historian of the Synodical of Kentucky, Presbyterian Church in the United States (PCUS). Shortly after, Fowler began to encourage the women’s auxiliaries of regional presbyteries to produce annual histories. By 1927, Fowler served as the General Historian for Woman’s Work for the PCUS, and was also a founding member of the Executive Committee of the Historical Foundation of the Presbyterian and Reformed Churches in Montreat, N.C. In 1930, Fowler expanded her proposal to include congregational histories and encouraged congregations to send these entries to the foundation.

Fowler’s proposal to gather local church histories was offered in anticipation of the upcoming 60th anniversary of the PCUS. In larger part though, her proposal took into account the 17 years since the General Assembly recognized the work of the Woman’s Auxiliary of the PCUS. Little had been done to document this at a congregational level. The project allowed congregations to reflect retrospectively and established an ongoing practice of record-keeping.

From 1929-1955, Fowler managed the intake and curation of these papers. It became standard practice for a local church Women’s Auxiliary (later “Women of the Church”) to nominate a historian who was responsible for writing and submitting a summary of the annual work done by the women of the church. Fowler hosted annual workshops for these women historians at Montreat, and frequently issued instructions on creation and submission of material.

The tradition of storing histories in “Black Binders” was established rather quickly. In 1934, Mary Woodson Groves (1875-1946), historian for the Presbytery of Central Mississippi, began submitting her entries with one of these binders. The aesthetic was received favorably by Samuel Mills Tenney (1871-1939), head curator at the foundation. He quickly made it standard practice for congregational histories to be stored in these binders.

Within four years of the program’s inception, more than 2,000 congregations were participating. By late 1948, over 400 black binders housed the histories from 2,840 individual contributing congregations. The binders continued to grow: in 1955, the year of Fowler’s retirement, there were 960; by 1963, 2,500; and in 1975, the number of binders had reached over 5,000, with 3,500 congregations participating.

An average of 6,000 inquiries were made each year concerning these histories, many in person. Visiting historians, including Joel Alvis, Diana L. Ruby Sanderson, and R. Douglas Brackenridge, led annual seminars for local church historians.

Since 2007, this collection has been entrusted to the C. Benton Kline, Jr. Special Collections and Archives at Columbia Theological Seminary. The collection holds the histories of 5,800 Presbyterian Church (U.S.A.) congregations from 42 states. This enormous collection occupies close to 1,200 cubic feet and continues to grow every year.

As an archivist at the C. Benton Kline, Jr. Special Collections and Archives, Brian Hecker frequently refers visitors seeking the history of individual congregations to these histories. Without fail, visitors walk away utterly impressed with the details and delight provided by these Presbyterian Women historians. These histories are important, telling the story of God’s people beyond ways intended by the individual historians.

The value of these records does not stem from the sheer volume magnitude — which in and of itself sets them apart. In terms of primary source material for a given period of church history, this is the largest collection anywhere in the world. The value of these records stems from the volume of collected years of care, overflowing joy, and commitment which has been poured into them.

The C. Benton Kline, Jr. Special Collections and Archives continues to curate and manage the annual intake of these histories. To encourage the sustained submission of these histories, we point you to the guidelines provided through Presbyterian Women found here. Frequently-asked questions and answers can be found via this link.

Histories can be submitted electronically (archives@ctsnet.edu) or by mail:

Archival paper is not necessary for mailed submissions; office paper is sufficient. For further questions, contact the archives via phone 404-687-4628 or email archives@ctsnet.edu.