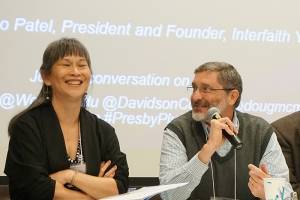 Higher education is the oldest form of Presbyterian Church mission beyond the congregation.

With its roots tracing back to the Protestant Reformation in 16th century Europe, in the United States the Presbyterian emphasis on higher education dates to the early 1700s with the founding of the College of New Jersey, which later became Princeton University. Today, 56 colleges and universities continue to emphasize their historical relationship with the Presbyterian Church (U.S.A.)

But the question is, what does that historical relationship mean today?

And—related to it—what role does the college chaplain play in “telling the 30,000 foot version of the story”?

Not surprisingly, the answers to Patel’s questions were as varied and diverse as each of the 56 college’s unique campus contexts.

Spach said that in the past Davidson College’s permanent faculty had to sign an oath certifying their commitment to the Christian faith. “No more,” he said. “And now, more and more people attending the college are not Presbyterian, or even Christian.”

Today Spach said that he regularly employs the college’s Statement of Purpose to engage people with Davidson’s mission and ethos, “interpreting it over and over again” in order to help people understand the college’s story, especially its call to interfaith work and witness.

“’The Christian tradition to which Davidson remains committed recognizes God as the source of all truth, and believes that Jesus Christ is the revelation of that God, a God bound by no church or creed,” Spach said, quoting the Statement of Purpose. “We don’t have to be afraid of truth. Because we’re Presbyterian, we have to have openness to and respect for people of other religions and for people who are non-religious as well. The point is that we’re seeking to honor truth as an educational institution, recognizing that our own understanding is limited.”

Spach said that “epistemological humility within the Reformed tradition is a given.”

“That is where the Reformed tradition stands,” he said. “It doesn’t want to impose itself on anyone, so, therefore, all throughout the college’s life, we should be attentive to all of this, and create an ethos at the college where everyone’s voice is welcome.”

To illustrate his point, Spach said during the following question and answer session that at Davidson’s commencement, he doesn’t give the invocation, but rather a rabbi stands up and begins to pray in Hebrew.

“For me, that’s what it means for us to be Presbyterian,” Spach said. “He gets to be himself. He gets to be Jewish in a very public context.” 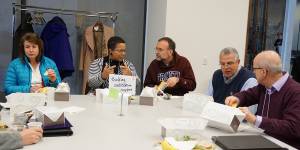 Morgan-Clement, who opened her remarks by stating that the College of Wooster would be celebrating its 150th anniversary this year, said that the institution’s self-understanding and history are told and understood differently based on who the college chaplain is.

“The role of the chaplain is to be discerning listener, narrator, and translator, at least at the College of Wooster,” she said. “A narrative is always told from a viewpoint, to an audience. One of the hardest things I do is point out to people that there is always another side to every narrative. The counter narrative is the one we don’t want to hear. [On some campuses] students are studying in buildings their ancestors once built as slaves. That’s a conversation we ought to be having as a nation.”

Patel later observed that the increase in religious diversity on college campuses has tended to encourage the toning down of the Christian story in those institutions. “There has to be a way that that diversity turns up the volume of the Christian story,” he said. “When a Hindu says, ‘I am X,’ we don’t respond with enough of, “I am Y.’ We need to create the space for diversity—that’s why he’s there or she’s there.”

Dr. Marjorie Hass, the first woman and first Jewish president of Austin College, shared in the dialogue following the panel’s presentation that “not everyone was excited about her being Jewish.” She said that one trustee left, and that a donor refused to meet with her because she is Jewish.

What Hass said was transformational for her was a comment made by Sara Bernice Moseley, the first woman moderator of the former Presbyterian Church of the United States (PCUS), who died in 2013. Moseley was married to John D. Moseley, a former president of the college.

“When I was first appointed, [Moseley] gave us an anecdote that we still use,” Hass said. “When someone told her, ‘We’ve hired this Jewish woman,’ she said, ‘A Jewish woman? How Presbyterian of us.’ She was explicitly connecting that my presence as a leader on this campus is part of [the college’s] vision. We worked hard to find language that is authentic to me, authentic to Austin College, and authentic to Presbyterians.”

Of the examples shared by Spach, Hass, and others, Patel said that it is essential that “we give people these connections, so that the people at [Davidson’s] commencement recognize the presence of the rabbi as being part of the Presbyterian tradition,” something that they otherwise might not have understood.

“It’s a part of [the Presbyterian-related colleges’] ethos,” he said.