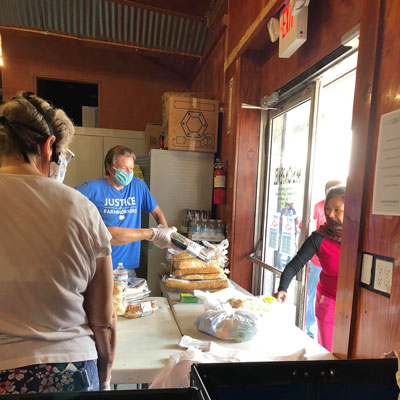 Grassroots organizations, including Misión Peniel, have been working to address some of the farmworkers’ basic needs, such as food. (Contributed photo)

LOUISVILLE — The way some advocates see it, farmworkers in Immokalee are up against an invisible clock, counting down to the day when the coronavirus could take off like wildfire in their South Florida community.

Efforts are under way by the Coalition of Immokalee Workers, a human rights group; the county; various non-profits and Peace River Presbytery of the Presbyterian Church (U.S.A.) to help educate and protect the farmworkers.

“We’re continually working toward keeping Immokalee safe as well as the rest of Collier County,” said Kristine Hollingsworth, a spokeswoman for the Florida Department of Health in Collier County, which is along the Gulf of Mexico north of Everglades National Park.

But some advocates say the government, including Florida Gov. Ron DeSantis, should be doing more to prevent the area from becoming a hotbed of COVID-19.

“It’s dry kindling ready to be ignited,” said Ruth DeYoe, mission coordinator at Misión Peniel, which is part of the Peace River Presbytery. “We need to do more with regards to testing.”

The tomato-growing enclave is ripe for the spread of coronavirus, advocates say, because of farmworkers’ living and working conditions.

Residing in cramped quarters with several other workers — sometimes multiple families — and traveling on crowded buses and vans to get to work are common.

“They’re being asked to work in the fields, often under circumstances that don’t allow them the proper physical distancing or the physical conditions where they can do that,” said Andrew Kang Bartlett, an Associate for National Hunger Concerns for the Presbyterian Hunger Program (PHP).

Multiple PC(USA) ministries, including PHP and Presbyterian Disaster Assistance (PDA), have partnered with groups in the area over the years on a variety of social justice issues, such as fair housing and hurricane recovery. This includes PHP’s annual support of the Alliance for Fair Food, which works integrally with the Coalition of Immokalee Workers, and recent COVID-19 grants from PDA to the presbytery.

In general, the fieldworkers in Immokalee “are treated the most poorly of any workers in the entire country, I would say, so I think it’s an obvious place for Christians, for Presbyterians, to step in and to try to stand beside, to listen to them, and to figure out how we can best try to assist them in their struggles,” Kang Bartlett said.

Because of the nature of their jobs, the farmworkers do not have the luxury of working remotely from home, and they cannot afford to lose wages to sickness, according to the Coalition, a partner of PHP and PDA.

“Farmworkers are definitely afraid and definitely very concerned about getting sick, but at the end of the day, they have to go to work, and so they are in this situation where they have to choose between potentially getting sick or not being able to pay rent,” said Silvia Perez, a staff member for the coalition. “They feel like they need to go to work.” 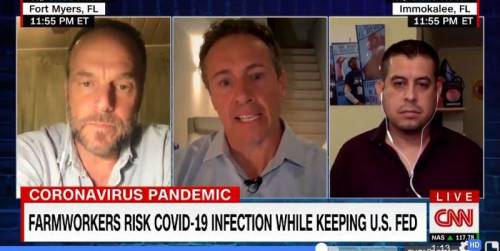 The plight of the farmworkers is receiving national attention. (Screen capture)

Because the nearest hospital is roughly 45 minutes to an hour away, the coalition has been circulating a petition to try to get the state to create a field hospital in Immokalee in case COVID-19 begins to take off there. The campaign, which also calls for safety gear and comprehensive testing, has attracted national publicity and garnered more than 35,000 signatures.

The campaign also includes an appeal letter to DeSantis that PC(USA) and several other notable groups and religious organizations have signed onto.

“We are looking for support from people from all over — from many different communities — in order to support this (campaign), because what it comes down to is that farmworkers are doing essential work,” Perez said. “It is the farmworkers here that put fruits and vegetables on the table of every family.”

As coronavirus continues to ravage the health of Americans nationwide, farmworkers are wondering, “‘What’s going to happen if I get sick?” she said. “‘Where am I going to go? What place can I be referred to if I do need help?’”

There have been more than 520 coronavirus cases in Collier County, including more than 30 in the Immokalee area, Hollingsworth said. But county health authorities won’t say whether those who have tested positive were farmworkers.

As for the idea of erecting a field hospital, she simply said, “We’re not there at this time.”

But she stressed that the farmworkers aren’t being ignored. “The Department of Health is testing, and so is the Healthcare Network of Southwest Florida.”

Fliers and handouts have been distributed in multiple languages, Hollingsworth said.

Also, there’s a truck with COVID-19 messaging on it, “driving all through Immokalee seven days a week,” she said. “It’s a semi. You can’t miss that.”

Presbyterian Disaster Assistance has provided funding to help the Coalition do community outreach through its radio station and social media.

“The radio station in Immokalee has become a very trusted and credible means of communication for the farmworker community,” said the Rev. Jim Kirk, a PDA Associate for Disaster Response.

The sheriff’s office has been “driving through the streets, pushing COVID-19 messaging, and they’re also encouraging social distancing,” Hollingsworth said. “We have daily interviews two to three times a day on all the radio stations in Immokalee,” and there also are recorded public-service announcements.

“We have not abandoned the community,” Hollingsworth said. “We’ve had literal boots on the ground, talking to farmworkers, going to laundromats, and places people tend to be, and educating.”

That includes reaching out to growers and bus drivers. “We’ve even supplied the bus drivers information on how to disinfect their buses, even the smaller vans that they drive, and how to keep passengers safe,” she said.

She also noted the presence of handwashing stations. “Immokalee Fire is filling those stations up regularly with water,” she said. “We’re providing the soap.”

Grassroots organizations, including Misión Peniel, have been working to address some of the farmworkers’ basic needs, such as food. 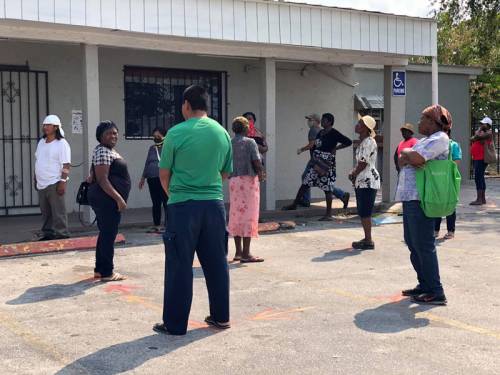 Social distancing is being practiced at Misión Peniel, which is part of Peace River Presbytery. (Contributed photo)

Misión Peniel feeds “anywhere between 400 and 500 every Friday with groceries, and we practice social distancing in the line-up and in the way we package the food,” DeYoe said.

“It’s all prepackaged and they get a full bag, and it’s fresh produce and nonperishables — pasta, rice, beans, canned goods, that kind of stuff,” and there are other sites doing that too, she said.

Farmworkers often have to devote a large part of their salary to housing, she said, so “they’re always just barely getting by.”

Meanwhile, Perez said the Coalition has been supporting a mask-making effort in the community.

“There’s actually a group of women in Immokalee that have been working to make homemade masks, and so we’ve helped to fundraise for them and get the materials that they need,” she said. It’s one way of “making sure that the people that are going out to work are really getting the protection that they need.”