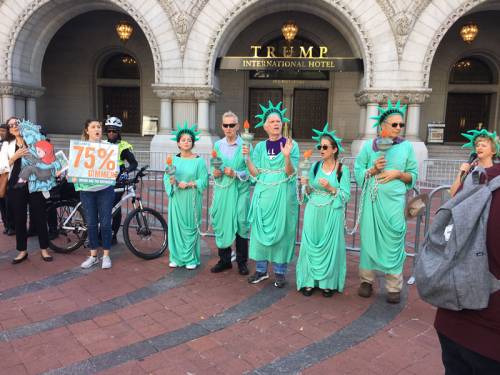 WASHINGTON, D.C. — According to the U.S. Department of State, the Trump administration plans to set the fiscal year 2020 refugee admissions goal at 18,000, a record low that effectively dismantles the U.S. resettlement program established nearly 40 years ago. Today’s presidential executive order also permits state and local officials to block refugee resettlement in their communities.

“We are a church that has participated in refugee resettlement for decades,” said the Rev. Dr. J. Herbert Nelson, II, the Stated Clerk of the General Assembly of the Presbyterian Church (U.S.A.). “We have urged members and congregations to open their doors to these newcomers. We know that those who are made vulnerable by this world are the ones God chooses to do wondrous things. Mary’s Magnificat in Luke Chapter 1 reminds us that the Mighty One works through all of us to bring about majestic acts of change and transformation. In the hymn ‘Canticle of the Turning’ we sing, ‘From the halls of power to the fortress tower, not a stone will be left on stone. Let the king beware for your justice tears ev’ry tyrant from his throne. The hungry poor shall weep no more, … there are tables spread; … for the world is about to turn.’

“May we understand that we are called as God’s beloved to seek justice and safety for the orphan, widow and stranger,” Nelson said. “The dismantling of the Refugee Resettlement Program is the sum of sin and power. We must seek ways to find justice in the ‘halls of power’ as God works through all of us to transform a broken world.” 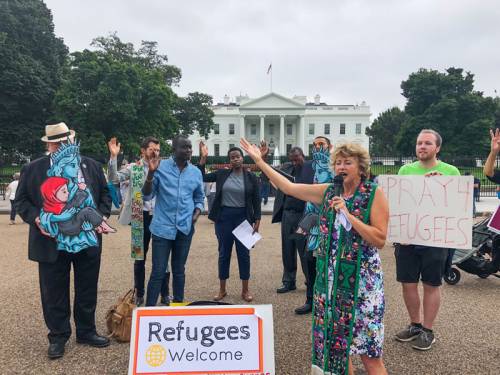 The Rev. Dr. Jimmie Hawkins and other faith leaders prayed for refugee resettlement in front of the White House at a rally like the one held today. Church World Service

“The present discussion on the part of the Trump administration about lowering even further the number of refugees allowed entry in this country is a matter of tremendous concern to people of faith,” Hawkins said. “The U.S. already has one of the lowest acceptance rates of western nations and an arduous application process that takes as long as 18 months, usually longer.

“Those seeking U.S. entry under the status of refugee are fleeing tremendous hardship and persecution. To hear the horror stories is heartbreaking. As people of faith, our first response has to be one of compassion and care, for there is room at the table for all,” Hawkins said. “Children are exposed to extreme violence, a loss of family and friends and simply want to grow up in a safe place.”

Hawkins said Presbyterians call upon the administration to increase the number of refugees allowed to enter in our land and to make true those time-honored words on the base of the Statue of Liberty, “Give me your tired, your poor, your huddled masses yearning to breathe free … Send these, the homeless, tempest-tossed to me,…”

As the PC(USA) office responsible for supporting churches, mid councils and national partners in the resettlement of refugees, Presbyterian Disaster Assistance acknowledged the impact these decisions will have on the refugees themselves, as well as those who serve them and love them.

“By further constricting the U.S. resettlement pipeline — which is a lifeline to just a few of the more than 68 million people on the move across our globe — we are abandoning our country’s moral authority in the world community, and sapping the vitality of a nation whose growth, vision and history are deeply rooted in the rich soil of diversity,” said the Rev. Dr. Laurie A. Kraus, director of Presbyterian Disaster Assistance.

“In my work with PDA, I have heard the stories of refugees enduring a marginal existence in camps around the world and asylum seekers following long established legal pathways to citizenship who are bewildered at being caricatured as criminals and dangerous ‘aliens,’ ” Kraus said.

“I have witnessed the rising up of our church as it says ‘yes’ of welcome to the stranger, offering hospitality and refuge to neighbors coming to our southern borders and over the seas to seek a place of safety and hope among us. The Barmen Declaration in our ‘Book of Confessions’ teaches us that in order to say ‘yes’ to Christ’s gospel, we must sometimes say ‘no’ to the systems and structures that deny good news its full expression, even when doing so puts our own privilege at risk. I am so grateful to belong to a church that has said ‘yes’ to welcome, and pray that our ‘no’ to this executive order will resound from sea to shining sea.”

According to a Church World Service news release, the passage of the 1980 Refugee Act resulted in the U.S. setting an average admissions goal of 95,000 refugees annually. Since the beginning of the Trump administration, refugee admissions have been severely cut, causing irreparable damage to refugee families, American communities and the infrastructure in place to welcome and support new arrivals. Across the country, hundreds of elected officials, congregations and business leaders have shown their support for refugee resettlement. The GRACE Act (S.1088 and H.R.2146) would set a minimum refugee admissions goal at 95,000 and restore the resettlement program to historic norms.

“With one final blow, the Trump administration has snuffed out Lady Liberty’s torch and ended our nation’s legacy of compassion and welcome,” said Church World Service President and CEO, the Rev. John L. McCullough. “The darkness of this day will extend for years, if not decades, to come.”

“I have worked with refugees and asylum seekers for 30 years and my heart is broken about this announcement,” said Susan Krehbiel, PDA associate for Refugees & Asylum. “I have witnessed firsthand the courage and commitment of refugees to not only recover from their past persecution and trauma, but to raise their families as active and contributing citizens of their new communities.”

—–
Presbyterian Disaster Assistance, the emergency and refugee program of the Presbyterian Church (U.S.A.), enables congregations and mission partners of the PC(USA) to witness to the healing love of Christ. PDA works with partners around the globe to support those impacted by natural or human-caused disasters. PC(USA) congregations have supported refugee resettlement since the refugee crisis created by World War II. Learn more about PDA’s Refugee Ministry.

The Presbyterian Office of Public Witness is the public policy information and advocacy office of the General Assembly of the Presbyterian Church (U.S.A.).

The Office of Immigration Issues is the advocacy office working on issues related to refugees and immigrants in the Office of the General Assembly.

Since 1946, Church World Service has supported refugees, immigrants and other displaced individuals, in addition to providing sustainable relief and development solutions to communities that wrestle with hunger and poverty. Learn more at GreaterAs1.org.