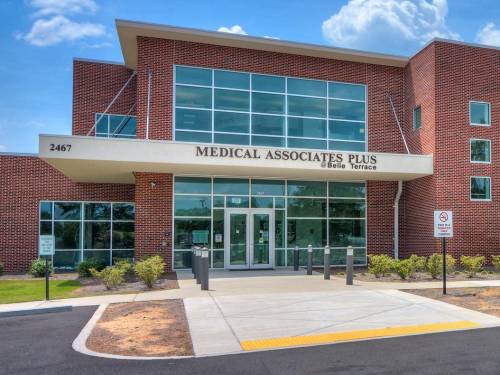 LOUISVILLE – Wonderful things can happen when the church listens to its neighbors. That, according to the Rev. Dr. Melvin Lowry, was the genesis of the

, now known as Medical Associates Plus, in Augusta, Georgia.

Lowry became pastor of Belle-Terrace Presbyterian Church in 1996 when the congregation came to a crossroads with its mission—it needed to decide how it would better serve the needs of the community with the resources it had available, namely land and people. Through a partnership with Richmond County and its health outreach, the church dedicated land in 1998 that would become a free and low-cost clinic serving the needs of its neighbors.

“One of the things I looked for when I arrived was how the church could be involved in the community more,” said Lowry, now COO of Medical Associates Plus, about the beginning of his ministry at Belle-Terrace Presbyterian. “The church has had the persona of community ministry—of being out there—and advocating for a number of different issues.”

Belle-Terrace Presbyterian Church was formed in 1969, initially gathered as a Sunday school that quickly grew into a chartered worshiping community. Lowry says the congregation was always focused on the people around it, looking beyond its walls, able to “take on the flavor of the community.”

According to Lowry, health care was one of the most pressing issues being mentioned by community leaders in the late 1990s. “It was determined we would accept the invitation of University Hospital to start a clinic in our area,” he said. The Neighborhood Improvement Project, Inc. was established to manage the clinic and forged the partnership between the church, the hospital, county agencies and other groups.

The clinic saw its first patients in 1999, providing services from a trailer on a 1.5-acre parcel of donated church property. And it steadily grew and increased its service offerings. In 2006, the group wrote a grant that enabled them to be listed as a federally qualified community health center. In 2010, the health center received a grant to update and expand the clinic, ultimately opening its present facility in 2013.

“When we first started, the flagship program was healthcare,” said Lowry. “But because the neighborhood had a significant number of seniors, we had a senior ministry. We had a number of young parents, so we had an after school program. We worked with behavioral health. The neighborhood was declining, so we had an economic development program as well.”

These “five pillars” of the program became more focused after the clinic became a federally qualified community health center, concentrating primarily on health and adding partnerships for other services with its community outreach ministry, which helps with voter registration and provides affordable health care act counselors.

Lowry describes the initial years of the daily clinic as a “labor of love,” owing to the lack of resources and the extensive reach of the ministry. What was most important though, he said, was that “people came in and they felt as if they were cared for… The best type of advertisement was word of mouth. Word spread and we grew.”

Medical Associates Plus has now expanded to five locations including the original facility, two rural clinics, an infectious disease clinic in downtown Augusta primarily addressing HIV/AIDS, and a mobile dental bus with a medical component. The clinic has partnered the bus with the Richmond County schools to provide primary dental and health care to students.

Far from its humble beginnings in a trailer in 1999, the clinic system saw 13,000 patients over 21,000 visits in 2015. That number has already been exceeded in 2016. Lowry believes the clinic will continue to expand and meet the needs of aging persons in the community, who moved from the city to Augusta in the 1960s as predominantly young, professional or government workers, and African-American.

J.R. Richards, Medical Associates Plus’ new CEO, expressed a vision for the program that positions it as the community health center of choice for individuals living in the Central Savannah River Area (CSRA) and the premier federally qualified health center in the state of Georgia.

“To me that’s a lofty vision, it’s something that will not happen overnight,” said Lowry. “But as someone who began with it as a trailer ministry, it is something that I can certainly aspire to.”