The church is responding to the Syria-Turkey earthquake, GIVE NOW!
Make A Donation Click Here >
Home › ‘Christ-centered masculinity’ 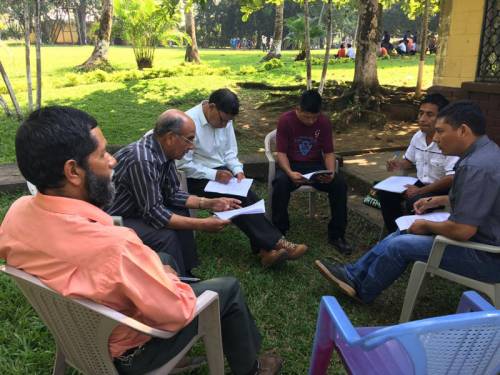 Efforts are underway to form “Men in the Mirror” study groups in Guatemalan congregations. (Photo courtesy of Brian Thompson-Royer)

LOUISVILLE — A resource developed by a U.S. pastor and a clergy colleague in Guatemala is helping Guatemalan men rethink the meaning of authentic masculinity.

“Men in the Mirror:  Orienting Our Lives Toward a Christ-Centered Masculinity” is a 13-session study that is being taught to male leaders in six Guatemalan presbyteries, and efforts are underway to begin study groups in congregations. It was originally written in 2012 by the Rev. Kevin Frederick, pastor of Waldensian Presbyterian Church in Valdese, North Carolina, and revised last year with help from the Rev. Mateo González, a pastor in the National Evangelical Presbyterian Church of Guatemala and a counselor.

The study examines the values that typically shape how men see themselves in relationships and offers tools to critique relationship skills. In each session, Bible passages inform how healthy relationships are developed. The biblical texts draw heavily on the life of Jesus, and how he related to various types of people.

“Men who grow up in North America, Central America or wherever learn a lot of messages about what it means to be a man,” Frederick said. These unexamined messages, he explained, often have negative impacts on interpersonal relationships.

“Even within the context of a relatively healthy family like my own, I had to unlearn or modify some things that I grew up with,” he observed.  In a culture like Guatemala’s, where the machismo attitude is even more pronounced, boys are bombarded with messages of male superiority, he said. “All of these cultural messages left unexamined have created some very unhealthy dynamics.”

Frederick has long been active in the Presbytery of Western North Carolina’s partnership with Sur Occidente and Suchitepéquez presbyteries in Guatemala. He has taught family health and development related courses in Guatemala 11 times in 14 years.  While teaching “Men in the Mirror,” he sensed the need for revisions and invited González to make it more “user friendly” to Guatemalan audiences. He commended González’s contributions, saying they were “exactly what the curriculum needed in order to be trusted and accepted.”

González is recruiting and training facilitators to lead “Men in the Mirror” studies in congregations. When the studies conclude, learners are encouraged to form ongoing support groups.  Through this process, González hopes men “will look at themselves, analyzing their relationships with their wives, daughters, sons, work colleagues — both male and female — and their relationships with other men and women in their community.”  The goal, he stressed, is to “make significant changes or improvements in these relationships.”

As better understandings of masculinity develop, González hopes there will be a reconsideration of the duties typically assigned to men and women.  Women, he said, traditionally do all the cleaning, cooking, childcare, and laundry duties in Guatemalan homes.  González believes that men learning to share these chores will build more respect for women, which will reduce the incidence of domestic violence. 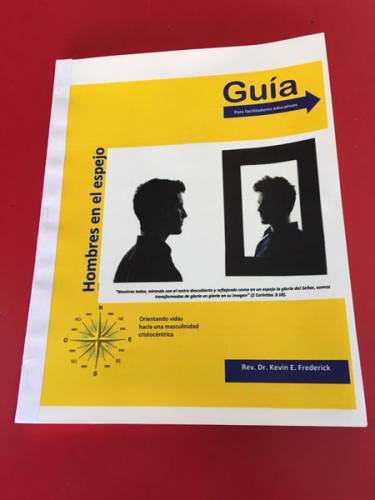 “Men in the Mirror” is a 13-session study that examines the values that typically shape how men see themselves in relationships and offers tools to critique relationship skills.

In congregations, while many women hold the office of deaconess, González said their roles often focus on cooking, cleaning, arranging flowers, and communion preparation and cleanup.  He wants men to join them in these chores.

González would also like to see more women serving as pastors and elders, “and in the long run, God willing, to have women moderators in the assemblies of the presbyteries and synods.”

Yet González emphasized the program will not be sustained by human effort alone. “It gives me hope that it is the Holy Spirit who will enable the work, the change, the total regeneration of all of those men whom God has chosen to participate in the organized groups.”

To read an English version the 2012 edition of “Men in the Mirror,” click here.