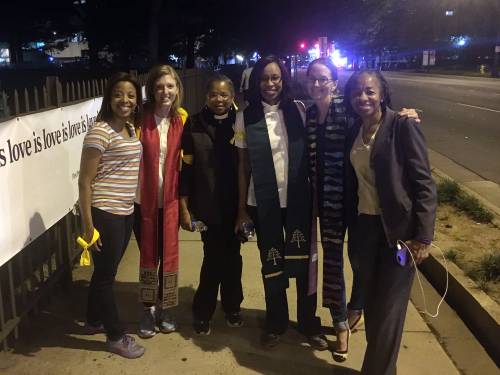 LOUISVILLE – Although the streets of Charlotte, North Carolina are now quiet following protests in response to the September 20 shooting death of Keith Lamont Scott by police, area Presbyterian Church (U.S.A.) pastors say the historic and deep-seated sentiment that fostered unrest after this killing remains.

“Charlotte is a southern city,” says the Rev. Amantha Barbee, pastor of Statesville Avenue Presbyterian Church in Charlotte. “I’m a Charlottean, so I can talk about my city. Charlotte is a pretty city with pretty people… This has been the mindset my entire 50 years—the highly educated people who live in the right neighborhoods and go to the right church have a wonderful, marvelous life. Those that don’t tend to be ignored or pushed aside.”

Although disappointed, she’s not surprised peaceful vigils and marches turned violent the two evenings following Scott’s shooting. Barbee was present at rallies Tuesday and Wednesday as a representative of the Charlotte Clergy Coalition for Justice, ready to talk to Scott’s family the evening of the shooting and as a peaceful presence on Wednesday when the protest moved uptown at the family’s request.

Clergy gathered in clerical attire during protest to identify themselves, hoping to be a presence in keeping the peace. Standing between protesters and police Barbee says they spoke to officers as protests intensified, saying, “Stay calm. Keep breathing.”

When demonstrators assembled Wednesday evening she says the group “started with a peaceful, meditative, prayer in Marshall Park. Then they went out into the street chanting, which was fine.” As the marchers moved through the city another group joined them. That’s when Barbee says, “All hell broke loose.”

“The tear gas came again. And then smoke bombs,” she says. “When a smoke bomb goes off it sounds like a gunshot. Several members of the Coalition were with us. One of our members was right beside the man [Justin Carr] that was shot. When the crowd spread back I saw the man lying on the ground with blood running from his head. It was not a pretty scene.”

Barbee says since then the demonstrations have gotten “more peaceful, more prayerful.” But the past 10 days have taken a toll; in addition to the systemic racism she sees in the city. “I’m tired. I’m very weary,” she says. “That would probably be the best word to describe what I am—I’m just weary.”

“We’ve struggled as a city with racism because it’s not obvious,” says Barbee. “There’s a lot of smiling in African American and Latino populations’ faces, making a lot of promises, but nothing happens. Or we’ll sit down and have a forum with you. We’ll provide you with snacks and talk about and share our stories and then do nothing else. We’ll invite you over Martin Luther King Day, but we want you to stay out of our faces for the other 364 days. I don’t want a real relationship with you. You can come to dinner at my house, but I’m not coming to yours. And I’ll call you my friends in public, but I won’t call you.”

According to Barbee, this dynamic is alive and well in the churches and plays “hugely” in how the Presbytery of Charlotte has historically handled race relations and conversations.

“The biggest issue I see within the presbytery is we are wasting our time having meetings to plan and there are no action steps,” she says. “We’ve been doing this consistently for too long—it’s time for action. If you don’t know what to do, put your pride away and ask someone who’s doing something.” 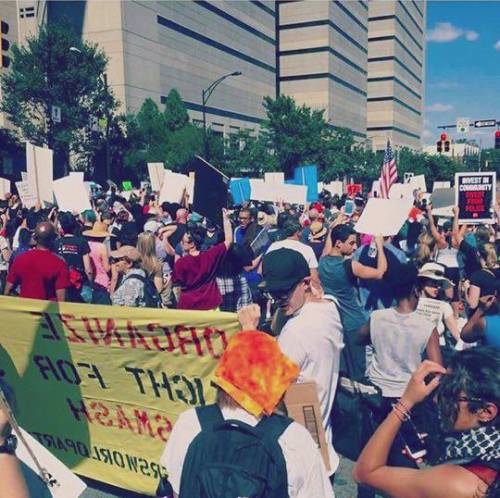 This message isn’t lost on the Rev. Betty Meadows, Transitional General Presbyter of the Presbytery of Charlotte. “I do know the church has been silent, the religious community has been silent,” she says.

“I don’t blame [our critics.] We talk a lot,” says Meadows in response to claims of inaction by the church. “So we’re going to have to prove to those who are tired of coming to the table and seeing nothing happen that we are going to be disciples of Jesus Christ and we’re going to be serious this time… I don’t blame them for their exhaustion and tiredness, even saying ‘talk is cheap.’”

Under Meadow’s leadership, the presbytery formed a Racism Task Force this summer and began looking at the past in addition to working to take action to address racism.

“I find the presbytery poised to step up,” she says. “All religious faiths have been too silent. We cannot ignore the pain of our African American brothers and sisters and how we’ve all contributed to it, even if we’re unaware of it. We’re waking up to that.”

The Task Force’s initial work, Meadows explains, is twofold. The first task is to conduct racism training in all 106 churches of the presbytery that spans seven counties. “It’s very hard and intentional work to awaken us to some of the behaviors or thoughts we’ve had that we’re even unaware of,” she says. “We’ll work for that a year or longer.”

The presbytery’s second task will be to listen to faith and civic leaders in communities of color with the intention of providing the assistance they request. “We will challenge every church to step up,” says Meadows. “Whether the church does it alone or with two or three others, or a cluster of churches, so we find our place—church by church—to make a difference in this school or this housing project. We have to feel that deeply within us.”

The Racism Task Force is also joining its efforts with the Freedom Rising initiative that emanated from the “Addressing the worsening plight of the African American male” overture passed by the 222nd Presbyterian Church (U.S.A.) General Assembly (2016) this past summer. A sub-group of the Task Force will take up this call to action and focus its attention on African American males age 6-25.

The Rev. Albert Moses, pastor of Matthews Murkland Presbyterian Church and co-moderator of the Presbytery of Charlotte Racism Task Force, says partnership will likely play a key role in the task force’s work.

A native of Charlotte, Moses says the violence experienced during last week’s protest is the first he can remember in 60 years of living in the city. Citing a 2014 Harvard study that places Charlotte at the bottom of a list of 50 cities that provide upward mobility for poor people, he says, “Things have gotten worse. Economic disparity is a critical piece. And educational disparity is a key piece. Add to that the lack of affordable housing; people are being displaced. There’s nowhere to go.”

Noting his once “rural African-American congregation” now sits in the middle of affluent white subdivisions in south Charlotte that have grown around them, he says, “There must be an acknowledgement that systemic racism exists. There must be confession before there can be repentance. There are a lot of folks in our presbytery who believe there is no such thing as systemic racism and that racism doesn’t exist in the church.”

He echoes the comments of Barbee and Meadows, saying the Presbytery of Charlotte “hasn’t done a good job [at racial reconciliation] since the merger in 1983. There’s always been some underlying distrust among the constituent churches and folks in the presbytery. We’ve not done a good job at all.”

Moses says there is a “sense of injustice and unfairness by the constituent African American churches as it relates to the presbytery as a whole.” And he doesn’t feel that is changing. Yet.

“The task we have, as I consider it, if we really do the work is that it will require a great deal of time and it will be difficult,” he says. “It’ll require uncovering some scabs and dealing with some very difficult issues. We could do some surface kinds of things, but if we do the real work it’s going to take time and effort. And there will be some folks who aren’t pleased with the things we address and discuss.”

Meadows believes there is momentum to make real change. “There’s an energy that says the Spirit is ready to really engage us, so we’re going to have to prove we’re more than words,” she says. “I believe not only will Presbyterians prove that, but this city will prove that. There are too many groups coming together—religious and non-religious—saying enough is enough.”

For her part, Barbee finds most hope in action. “We need to be bold enough to become the church they talk about, and lead by example. We can’t fight for justice from our living rooms.”

You may freely reuse and distribute this Presbyterian News Service article in its entirety for non-commercial purposes in any medium. Please include author attribution, photography credits, and a link to the original article. This work is licensed under a Creative Commons Attribution-NonCommercial-NoDeratives 4.0 International License.