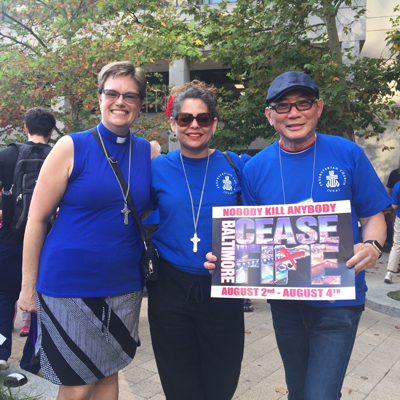 Stephen Koh,  a commissioned lay pastor who chairs the National Asian Presbyterian Council, joined the Co-Moderators of the 223rd General Assembly, the Rev. Cindy Kohlmann, at left, and Ruling Elder Vilmarie Cintrón-Olivieri, for a Cease Fire March in Baltimore in 2019. (Contributed photo)

LOUISVILLE — May is Asian American Pacific Islander Heritage Month, a celebration of the contributions and the heritage of Asians and Pacific Islanders in the United States.

The month of May was chosen to commemorate the immigration of the first Japanese to the United States on May 7, 1843, and to mark the anniversary of the completion of the transcontinental railroad on May 10, 1869. Most of the workers who laid the tracks were Chinese immigrants.

As U.S. residents celebrate the contribution of the AAPI community to this nation, they also acknowledge the increase in the number of hate crimes against the AAPI population.

The Center for the Study of Hate & Extremism at California State University, San Bernardino, compared data from the first quarter of 2021 to the same time frame in 2020 across 16 large cities. It found that hate crimes surged by 164 percent, continuing the “historic” increase in such attacks last year.

Koh says in a denomination that is 93% white, the Asian Presbyterians must speak out about the injustices that are occurring against the community at this time.

Koh, who also serves as the commissioned lay pastor for the Mandarin-speaking congregation of First Presbyterian Church is Burlingame, California, is a first-generation immigrant from Singapore. “I’ve been here [in the U.S.] for 40 years and I have not seen much of the discrimination in my personal life at all,” he said.

Most recently, First Presbyterian Church hosted a workshop to talk about the issue of violence against AAPI individuals.

“As a minister of my church, I have to really raise the issue and talk about it,” said Koh. “We need to speak up. I won’t keep silence. Asian ministers should encourage Asian Presbyterian members or members of our church to not be afraid to speak up and bring our concerns to the national body.”

When asked what he’d like to see happen as a result of the workshop and prayer fellowships, Koh said, “I’d like to see resources that encourages Asian churches to share their stories and how they’ve handled the issues.”

“I’d like for them to share the positive and negative things, examples of success stories. That will be helpful for others to look up to,” said Koh. “We don’t talk enough to each other, so we don’t know what’s working and what’s not working.” 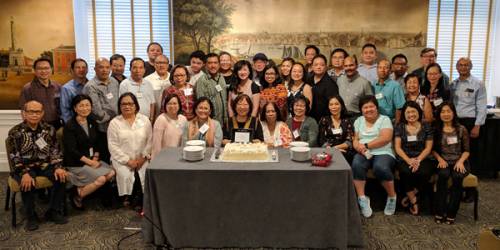 “We need to help each other to understand, to support any group, whether it’s Asian, Hispanic or Black we still need to come together and we support each other because one day this issue will come to you,” Kho said.

As people of Taiwanese descent who witnessed 38 years of martial law and authoritarian rule, we truly identify with Myanmar as you experience the brutal military coup at the moment.

The Tatmadaw (Burmese Army) refuses to accept the election results from last November,  where the National League for Democracy (NLD) received a landslide victory. It moved to ignore the will of the masses, insisting on overthrowing the civilian government with illegitimate means. In solidarity, the people of Myanmar, regardless of their race, religion, or gender, take to the streets to fight for the democracy stolen from them, only to be met with the Tatmadaw’s ruthless crackdown. So far, hundreds have been killed and thousands arrested. Each day, the people of Myanmar live their lives committing to fight, yet are on tenterhooks.

Being overseas, you must be broken-hearted and disappointed for what has happened in your motherland. Through this letter, we want to let you know that our hearts are with you. Your plight is not forgotten. We believe that the Lord who is just will vindicate you.

“No weapon that is fashioned against you shall succeed, and you shall refute every tongue that rises against you in judgment. This is the heritage of the servants of the Lord and their vindication from me, declares the Lord.” (Isaiah 54:17)

Our heartfelt prayers go out to you, and may the Lord’s comfort and peace fill you abundantly. May justice, democracy, and peace soon descend on Myanmar like dawn.

The National Asian Presbyterian Council (hereafter NAPC), denounces the acts of Robert Aaron Long in the Atlanta area on March 16, 2021. The untimely murder of eight children of God, including six of Asian descent, is tragic and sorrowful. As People of Color in this nation, we are all too familiar with the hate crimes that plague the society victimizing those that look different, sound different, have different heritages. Over the past year, nearly 3,800 hate incidents against AAPI have been documented, and countless more are undoubtedly going undocumented. No more.

We grieve the deaths of

— The Steering Committee of the National Asian Presbyterian Council