#GivingTuesday – Join the PC(USA) in responding to a world in need! Give now!
Make A Donation Click Here >
Home › Called to cultivate 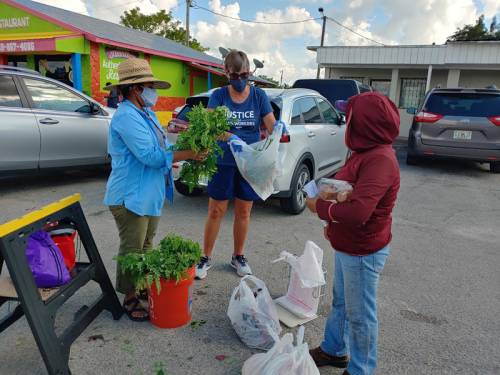 Fresh, nutritious produce from the Together We Grow Mission Garden is distributed by Misión Peniel to help the farmworker community in Immokalee, Florida. (Photo courtesy of Rick Burnette)

LOUISVILLE — A few years after its creation, the Together We Grow Mission Garden of Covenant Presbyterian Church in Fort Myers, Florida, continues to bring a bountiful harvest to families in the Immokalee farming community.

The land, which was part of existing church property, was vacant but overgrown when it was approved for use as a garden to benefit families served by Misión Peniel, a mission of Peace River Presbytery.

“We kind of took this as a challenge,” said Rick Burnette, a church member who tends the garden, along with a host of volunteers. To get the project going, “we worked on the land through the fall of 2017,” clearing the way for the church to dedicate the garden on Earth Day 2018.

Interest in creating the space came out of Sunday school discussions about addressing poverty.

“We’re a Matthew 25 church, so we are compelled by whatever we do for the least of these,” Burnette said. Also, “we are just struck by the continuity of numerous stories and scriptures and exhortations to work in solidarity with the communities that are willing and accept our attempts to serve in this way.”

Every Friday afternoon, fresh food from the garden and other local producers is shared with 300 to 500 Misión Peniel clients, who receive items such as cassavas, papayas, sweet potatoes and mangoes.

“To be in the garden, planting, tending and harvesting food, is to stand in solidarity with the farmworkers who harvest the food on our tables,” said Rick’s wife, Ellen. “It is a sacred space.”

Often, recipients are “working as hard as they can just to get by as farmworkers,” Rick Burnette said.

Since 2018, more than 3,800 pounds of produce has been grown in the garden and distributed through Misión Peniel, he said. That amounts to more than 8,300 servings with a market value of more than $4,500. 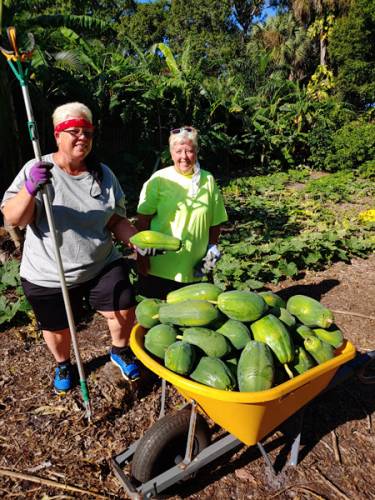 Produce like freshly harvested papaya is designed to appeal to families with cultural roots in places like Haiti, Mexico and Guatemala. (Photo courtesy of Rick Burnette)

Produce is tailored to the families, who tend to have roots in Haiti, Mexico and Guatemala and can appreciate being able to receive things like jackfruit, guava and various kinds of beans, said Ruth DeYoe, Mission Coordinator.

They appreciate some of the more exotic food because “to find it in a store is rare but to be able to afford it is even more challenging,” DeYoe said.

Those who grow the food find it just as rewarding as those who receive it.

“I just love it,” Rick Burnette said. “I’m compelled to do this. I think I was made to do this sort of work.”

Burnette, an agriculturist, takes part not only as a member of the church but also through his family’s nonprofit, Cultivate Abundance, which has Ellen Burnette as its executive director.

“Parts of Immokalee where the farmworkers live is a food desert,” he said, “and so our nonprofit was established to address that, and being members of Covenant, we’re able to help to better advise and assist Covenant as well as other churches and institutions with growing Immokalee-appropriate food.”

Burnette, whose work is also supported by the Cooperative Baptist Fellowship, recalls the hard work that was required to transform the initial space into a garden.

After clearing the land with hand tools, “we improved the soil with compost and mulching” and installed an irrigation system and began growing crops in early 2018, he said. It was “one large plot on which we established crops like cassava and fruit trees.”

The following year, “we kind of realized there was some adjoining land that was vacant church property, and we asked permission to access that, and that was approved, so we doubled the size of our garden.”

Later, “other land was also provided — small patches here and there — so the garden has been growing little by little in a sustainable way over the last two to three years,” he said.

The people who benefit include farmworkers and food-related laborers, including drivers, as well as others in need of assistance, DeYoe said.

In addition to being a place to obtain good, nutritious food, the mission has been a site for people to connect with community health workers during the pandemic. Information about COVID-19 testing and prevention has been distributed and people have gotten the chance to ask questions about various health topics, such as high blood pressure, DeYoe said.

It’s all part of the mission’s commitment to live up to the Peniel name, which means “the face of God.”