Partnership welcomes ‘brothers and sisters’ in faith into community 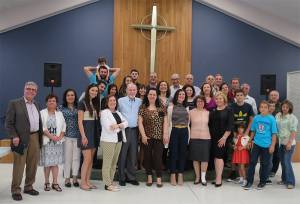 Tim McCalmont (center left) with the Syrian congregation following their Arabic speaking Easter season worship. He says he is grateful to God for ‘dropping what has become a life of its own into his church’s lap.’ —Courtesy Presbyterian Church of the Covenant

When Saousan Jarjour came to Costa Mesa, California, the Rev. Tim McCalmont had no idea impact she would have on him. A young woman from Homs, Jarjour came from Syria to study music at Orange Coast Community College. Its campus is across the street from Presbyterian Church of the Covenant, where McCalmont serves as pastor. Raised Presbyterian, Jarjour showed up in church one Sunday in 2004 and soon after started singing in the choir.

“She has the most beautiful voice,” says McCalmont. “Both she and her parents, who joined Saousan four years later, were embraced by our congregation.”

As the violence in Syria, which began in 2011, unraveled into a brutal proxy war, McCalmont reached out to Saousan’s father, Arfan Jarjour. He’d been very involved in the National Evangelical Synod of Syria and Lebanon (NESSL), and was a primary contact, with Presbyterians back home, who were still in Syria.

“I asked Arfan to help me develop a relationship with a pastor in Homs,” says McCalmont. “I wanted to know someone on the ground, so that we could begin praying for each other.”

McCalmont began an e-mail relationship with Pastor Mofid Karajilly at the National Evangelical (Presbyterian) Church of Homs. He said heavy shelling in May 2012 brought down large sections of the sanctuary roof, knocked out the utilities, and blew apart most of the pews.

By 2014, McCalmont was involved in the Syria Lebanon Partnership Network of the Presbyterian Church (U.S.A.) After traveling with the group in the spring of 2015, he became the network’s second moderator, which deepened his “pastoral partnership” with Karajilly. The two continue to pray for one other, for the people in their congregations—and for the Syrian refugees who are part of McCalmont’s congregation, and those living near them.

“They are amazing saints. Wise, resourceful and deeply spiritual,” says McCalmont. “I’ve learned about the central importance of prayer that ties us together. The political, social and spiritual complications drive you to your knees, to bathe it in prayer, so that you don’t give up.”

In January of this year—nearly twelve years after Saousan Jarjour showed up to sing in the Presbyterian Church of the Covenant choir—McCalmont helped begin an Arabic speaking Syrian fellowship, which they hope will one day become a new worshiping community. At the first service, led by Adel Malek—who pastors an Egyptian worshiping community in Hunington Beach, more than 25 people came, and it has grown as many as 60, in less than six months.

“Arfan and others had extended family members—they wanted recreate worship like they had in Syria,” says McCalmont. “To worship in Arabic, the language of their heart, you can see how meaningful that is to those who are coming. We’re grateful to Adel for jumping in to help us.”

Originally from Egypt, Malek has been in the United States for more than 30 years. An engineer, turned theology teacher and now pastor, Malek became philosophical when asked why he was willing to take on a second worshiping community.

“How can we as Christians call the Syrians who are here terrorists,” he asked. “These are our brothers and sisters. After graduating from Fuller [Theological Seminary] I found myself teaching —I didn’t really want to pastor—but now how can I say no?”

As Malek, McCalmont, the Presbyterian Church of the Covenant, and the Syrian members live into their sense of call to be together in prayer, they experienced a resurrection moment. During Holy Week they tried something new. On Palm Sunday, Good Friday and Easter the Syrians participated in the Church of the Covenant’s worship services—as was a way for McCalmont’s congregation to connect more deeply with the fellowship.

There was great energy—and even humor. “We made a stab at singing ‘Christ the Lord is Risen Today’ in English, and invited the Syrians to sing one verse in Arabic,” says McCalmont, laughing gently. “We’ll work on that some before trying it again.”

But at the end service they got it right. As they all sang “Hallelujah” together, it was “absolutely life giving.”

“We’ve discovered together that one of the Syrians’ greatest needs to find a community that gathers around them emotionally and spiritually,” says McCalmont. “We want to be prepared for a time when more are here. It’s been so organic. We’re grateful God dropped—what has become a life of its—own into our laps.”

Through the Syrian Lebanon Partnership Network two overtures have been developed to bring to the 222nd General Assembly (2016.) They’ve been approved and submitted by the New York City Presbytery, and concurred by thePresbytery of Los Ranchos—of which McCalmont is a member. Read more about the overtures here.

The PC(USA) Office of Immigration Issues has created a resource page around the “We Choose Welcome” campaign with theological and advocacy information for those wishing to study the issue and participate in action on behalf of Syrian refugees.