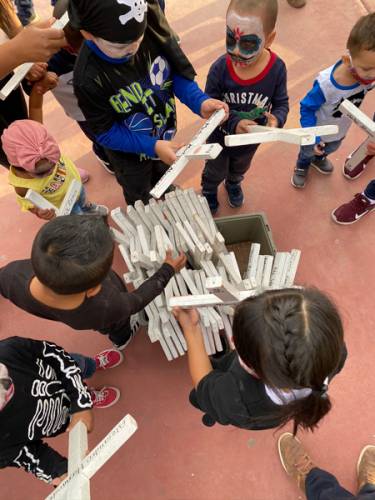 During the Day of the Dead prayer service in Linear Park, children choose a cross in remembrance of someone who died in Cochise County while migrating. (Photo by Caleb Dupree)

AGUA PRIETA, Sonora, Mexico — Just two blocks north of our home in Agua Prieta, Sonora, Mexico, is a 40-block-long linear park that straddles the U.S.-Mexico border. My family and I enjoy walking there in the evening and relish the spectacular sunsets that don’t respect borders. In this time of pandemic, we are glad to see families and friends walking dogs and getting exercise along the 14-foot-wide park.

Our neighbors in Douglas, Arizona, cannot directly access this community space, even though about a third of the park is on U.S. soil. The northern boundary is a barrier of 18-foot rusted steel bollards, imposed by the U.S. government and built about 3 feet north of the international boundary. The northern side of the barrier is draped with four large strands of razor-sharp concertina wire.

On the U.S. side, just beyond the barrier for about half the length of the park, is a 12-foot-deep concrete moat with more strands of concertina wire and topped with a 12-foot-tall steel mesh barrier. The other half of the park is a barren dusty landscape that was bulldozed years ago to create a “no person’s” land. Families and friends in Douglas do not come near the northern side border to walk, exercise or hang out.

There are signs welded to each side of the bollard barrier warning, in English and Spanish: “Danger: Do not enter.” 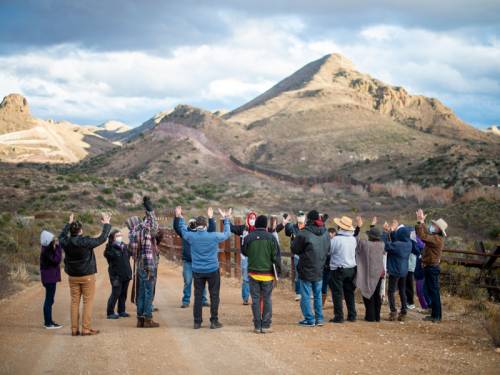 In January, the Presbyterian Border Ministry led a pilgrimage of prayer, lament, repentance and commitment in solidarity with the “Not Another Foot” movement to call an end to the construction of the massive border wall spanning the entire southern border of the U.S. (Photo by John Darwin Kurc)

When God created this beautiful part of the world, there were no walls dividing the valley. Animals migrated freely. The Opata peoples moved freely north and south, east and west, unencumbered by human barriers.

Before the Apaches were driven from here and forced to live on reservations, they spent summers in the Chiricahua Mountains to the northeast and winters in the valley itself. When the Spanish first claimed the lands here, they did not build walls. Nor did the Mexicans when they obtained independence.

The U.S. government, driven by the racist and imperialistic Manifest Destiny, wrested geopolitical control of this valley from Mexico after the Mexican-American War and the Gadsden Purchase. Even so, for more than 150 years, we did not construct walls to separate us from our neighbors. 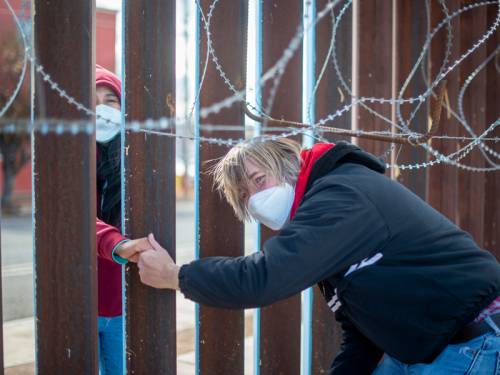 PC(USA)mission co-workers Miriam Maldonado Escobar (left) and the Rev. Mark Adams each migrated over 1,800 miles to serve in the Presbyterian Border Ministry. Miriam migrated from the Mexico/Guatemala border and Mark from the North and South Carolina border. (Photo by John Darwin Kurc)

When my wife, Miriam, arrived in Agua Prieta in 1995, there was no physical wall of hostility dividing the valley. People freely came and went between the sister cities. The first steel barrier through our community was constructed in 1997 by the Clinton administration as part of a new border policy, Prevention Through Deterrence. But new border policies did not stop migration; rather, they rerouted migration away from populated areas and into more remote areas, using mountains and deserts as lethal deterrents to migration.

Steel barriers now wall off 703 miles of the 1,970-mile border between the U.S. and Mexico. The irony is that even after building these barriers over the past 25 years, the undocumented population is four times higher than it was after 150 years of having no walls between our nations. The smuggling industry has thrived and been enriched in this era of increasing border enforcement. And the poor and mostly people of color have suffered greatly at the hands of a policy that leads them into the hands of the smugglers and into more and more remote deserts and mountains.

The new taller wall is far more dangerous. As one senior Border Patrol agent shared with us: “You fall off of this one and you don’t walk away.” It has made an already lethal border policy even more deadly. In 2020, more people died while crossing into the U.S. than in more than a decade, even as the actual number of people crossing decreased.

Instead of addressing root causes of migration, as the farmers of the coffee co-operative Café Justo have done, or implementing immigration policies that allow for the orderly and humane migration of people created in the image of God, each administration from Clinton to Trump has chosen to view the border through the lens of border enforcement. They have spent billions of dollars turning our border into a para-militarized zone of walls, cameras, sensors and more than 500 Border Patrol agents in a town of a little over 17,000 people. This has increasingly separated the families of a community that has been tightly interconnected economically and culturally for generations.

The Statue of Liberty has become a symbol of our mythology as a welcoming nation that is a refuge for the tired, the poor, the huddled masses yearning to breathe free. The border wall represents the reality of the racial, cultural and economic fear of “others” that pervades our nation. Xenophobia has taken root in our DNA. 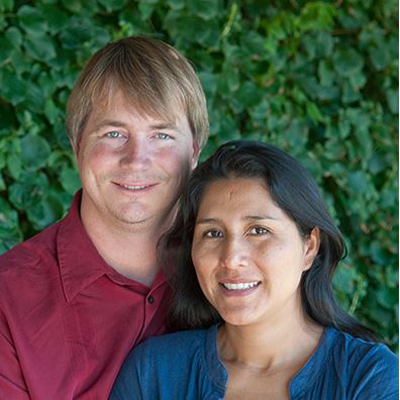 The church of the U.S.-Mexico borderlands has been in a unique position to witness to the growing division, fear and death occurring on our shared border, as well as in the interiors of our nations. It is in this context of tension and suffering that we are called to bear witness to the good news of Jesus Christ who “is our peace who has made the two one and who has broken down the dividing wall of hostility” (Ephesians 2:14). We put our trust not in the god of walls, but in the God who crosses borders and forms us into a holy temple, a community of faith across time and space.

Consider making an online gift to help transform lives on both sides of the border.