LOUISVILLE — Broad Street Food Pantry in Columbus, Ohio, got its start in 1971 when women from Broad Street Presbyterian Church (BSPC) noticed that more and more people were requesting food from the pastoral staff and wanted to help.

Fast-forward more than a half century and the pantry is still going strong, distributing food to thousands of people while also being sensitive to food justice issues.

From offering fresh, local produce to raising awareness about voting, the food pantry strives to be a beacon in the community without being paternalistic. Its focus, as noted on its web page, is “supporting neighbors by putting healthy meals on their table with respect and dignity for all.”

Instead of assuming that food-insecure people will eat anything that’s offered to them, a form is provided so that people have a say in which items they take home. 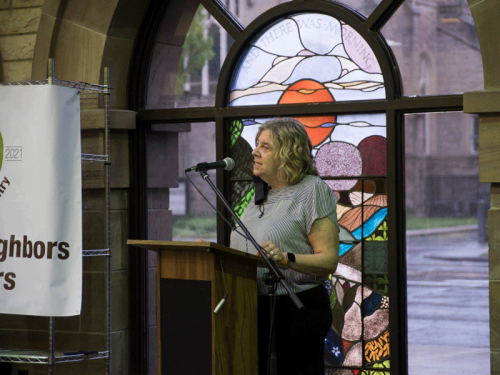 “We’ve tried to move away from the charity model to more of a justice model, so that we provide choice,” Director Kathy Kelly-Long said. Providing healthy and “culturally appropriate choices” also is important “versus just having whatever people donate.”

The pantry, which is an outreach mission of BSPC, also operates under the premise that “eliminating hunger will only come with policy change, thriving wages, and racial and economic justice. That’s why we advocate for a strong safety net and racial equity,” Kelly-Long wrote in the blog post “7 Lessons I Have Learned at the Broad Street Food Pantry.” 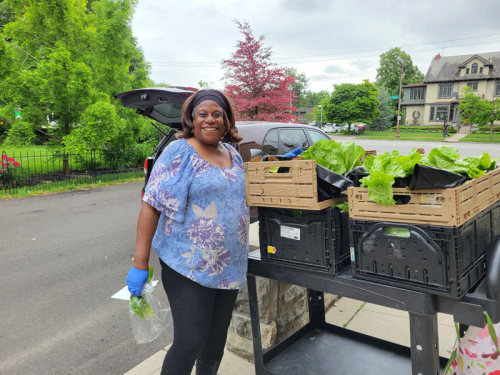 Ava Johnson of Southeast Gardens and Farm is one of the local growers that the pantry purchases fresh produce from. (Photo courtesy of Broad Street Food Pantry)

Earlier this year, Kelly-Long participated in an online chat featuring right-to-food advocates, during the White House Conference on Hunger, Nutrition and Health.

“There are people being very intentional about raising up the fact that food should be a basic human right, that it shouldn’t be dependent on what your income is or isn’t, and it shouldn’t be controlled by the government when they tell you how much SNAP (Supplemental Nutrition Assistance Program) money you have to spend,” she said. The right-to-food community has been “helpful to know about and to hear more from.”

The pantry, which operates two hours a day from Monday through Friday using space at the church, is on track to serve 14,000 families this year, up from a previous high of 11,900 during the pandemic.

Kelly-Long attributes a recent uptick in shoppers to inflation and other factors, such as some people losing benefits that were in place when the pandemic was raging.

“We’re seeing a lot of new families every month. To me that says a lot of families were getting by before, but now, with the increase in cost of food, cost of gas and the lack of increase in wages, the money that was enough to get by before is leaving people a little short.”

When speaking with donors and other community members, Kelly-Long tries to help people “do the math” to see how easy it is for even working people to get in a pinch for money.

For example, if you make $8 an hour and “pay $800 a month in rent and utilities, what do you have left? And then you add in the cost of childcare because you can’t take your kids to work with you,” she said. “Minimum wage just isn’t enough to get by on, let alone thrive on,” she said. 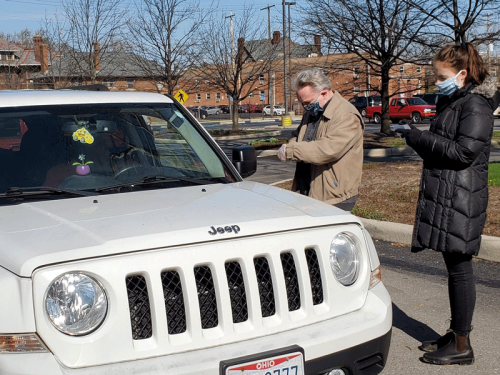 The pantry switched to a drive-through method of grocery distribution during the pandemic and has continued to use it because of its popularity, director Kathy Kelly-Long said. (Photo courtesy of Broad Street Food Pantry)

In a recent Presbyterian Hunger Program webinar, the featured speaker, the Rev. Alison Dunn-Almaguer of the Washington Interfaith Network (WIN) lifted up various ways that churches and other community groups can address such problems. Providing direct services, such as food, clothing or backpacks, is a way for churches to meet immediate needs. “All of those things are incredibly important,” she said.

Other ways include activism or mobilizing to fight for change, doing advocacy that’s focused on a particular issue, and Congregation-Based Community Organizing, which is often focused on multiple issues and tends to take place over a period of time.

At Broad Street Food Pantry “whenever I get emails from Bread for the World (or) anybody about ‘Call your senator,’ or do this or that, I share them with our volunteers,” said Kelly-Long, who also reaches out to members of BSPC, a Matthew 25 church.

It’s not as easy to reach shoppers because they don’t always have email or reliable cell phone service. But sometimes “we have postcards available that they can either sign off on a pre-printed message or write their own,” she said.

Some of the issues the pantry has raised awareness about include immigration and aspects of the Farm Bill, scheduled for reauthorization in 2023.

Other efforts have included encouraging people to vote, making them aware of early voting opportunities and having the League of Women Voters out to help people to register. It’s part of “making people aware of the issues,” Kelly-Long said, “and then inviting them to raise their voice.”

The Presbyterian Hunger Program is one of the Compassion, Peace and Justice ministries of the Presbyterian Mission Agency. Its work is made possible through gifts to One Great Hour of Sharing. Eradicating systemic poverty is one of the goals of Matthew 25. Read more here.