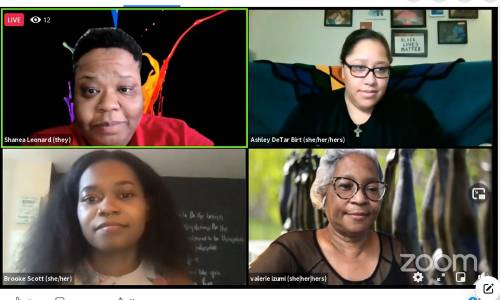 The Disparities Experienced by Black Women and Girls Task Force hosted a panel discussion Thursday that included (clockwise from upper left) the Rev. Shanea Leonard, Associate for Gender and Racial Justice in the Presbyterian Church (U.S.A) Office of Gender, Racial & Intercultural Justice; the Rev. Ashley DeTar Birt, co-moderator of the board of directors for More Light Presbyterians; valerie izumi, assistant stated clerk in the PC(USA) Office of the General Assembly; and Brooke Scott, a preacher and social worker. (Screenshot)

LOUISVILLE — A panel discussion hosted by the Disparities Experienced by Black Women and Girls Task Force was nearing a close Thursday when the Rev. Ashley DeTar Birt asked panelists how the Presbyterian Church (U.S.A.) could better support queer and trans Black women and girls.

valerie izumi, an assistant stated clerk in the PC(USA) Office of the General Assembly, noted that ideally, it would be best to ask trans people directly but offered multiple suggestions as a member of the panel.

“I do think that we need to elevate marginalized people,” said izumi, who identifies as queer. “I think that we think we’re ‘all that’ because we get to say ‘LGBTQIA,’ but we are making still invisible many members of that community and erasing them. I think that’s a problem.”

izumi also lamented that certain tragedies are occurring in society without the denomination speaking up about them. Specifically, “Black trans women are being killed and we’ve not said anything. We’ve not decried that. That is unacceptable and I think that needs to shift ASAP,” she said.

Those were just a few of the suggestions by panelists, who included Brooke Scott, a social worker and preacher seeking her first call; discussion facilitator DeTar Birt, co-moderator of the board of directors for More Light Presbyterians; and the Rev. Shanea Leonard, Associate for Gender and Racial Justice in the PC(USA) Office of Gender, Racial & Intercultural Justice.

The discussion, which also delved into the personal experiences of participants, was the final one in a five-part series exploring concerns outlined in the task force’s General Assembly report on major concerns of Black women and girls, DeTar Birt said. Those concerns include the adultification of Black girls; toxic theology and gender equality in ministry; reproductive justice; cash bail and legal support; and the intersections of race, gender identity and sexual orientation.

DeTar Birt, a task force member who serves as program manager for Beloved Arise, which celebrates and empowers queer youth of faith, and is a co-founder of the recently announced Center for Jubilee Practice, encouraged viewers to read the report and be inspired to take action. “We have worked hard to create a report and to promote our report, highlighting various issues faced by Black women and girls, as well as ways that the Presbyterian Church specifically, but also just people in general, can help to address some of those issues.”

During the panel discussion, Leonard, who is nonbinary, noted the dearth of trans and queer people in leadership positions at the PC(USA) national office and among the people commonly writing resources and curriculum.

For example, “I’m the only person that I know of who’s a person of color (who is of some type of trans experience) in the national office,” said Leonard, who noted that nonbinary falls under the trans umbrella.

Leonard, who uses the pronouns they and them, noted that there is a rise in suicide among young people and Black people who are queer.

“We need to look at that and how we help and come alongside people who are dealing with these issues because they feel so disenfranchised or feel so alienated, particularly around communities and families and churches that tell them that they are not valued, they’re not affirmed, that they are not loved because of a theology that is hateful and rooted in white supremacy culture,” Leonard said. “We have to call that out.”

Scott, who works for a suicide prevention hotline, said it goes without saying how many of the people in crisis are queer and experiencing rejection from family, church and communities that should be supporting them. She urged the denomination not to make room for hatred or silence. 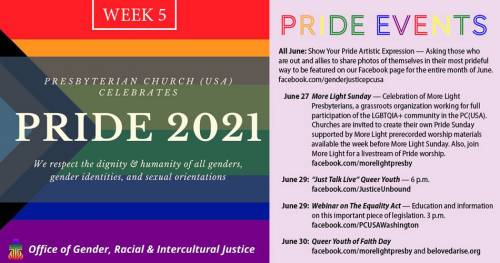 Pride events continue through the end of the month..

The wide-ranging discussion also touched on the need to include images of trans and queer people in materials, such as those displayed during most odd-numbered years at Big Tent.

“We have to share and reflect the diversity that is rich within our church communities,” said Leonard, adding that the church must be deconstructed and rebuilt in order for it to grow.

The Office of Gender, Racial & Intercultural Justice is one of the Compassion, Peace and Justice ministries of the Presbyterian Mission Agency.