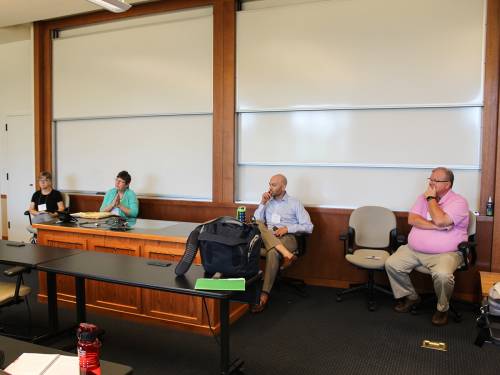 ST. LOUIS – Presbyterians attending Big Tent in St. Louis had an opportunity to hear the pros and cons of divesting from fossil fuel companies. The Presbyterian Mission Agency’s Office of Faith-Based Investing and Corporate Engagement hosted a workshop bringing together representatives to discuss when and if divestment should take place.

The Mission Responsibility Through Investment (MRTI) Committee is responsible for engaging corporations in which the Presbyterian Church (U.S.A.) owns stock to ensure investments match church values. Groups like Fossil Free PCUSA have urged the church to divest now, saying time is running out on climate change. MRTI has argued that the church has a stronger voice at the table as long as investments remain in place, adding that divestment is always an option.

“It has never been more important to be engaged on this issue than it is now,” said Rob Fohr, director of the Office of Faith-Based Investing and Corporate Engagement. “We all want to move toward a low-carbon future. We agree that climate change is real and that the church needs to respond.”

Laurie Fisher is a member of Fossil Free PCUSA, and believes the church should divest from all current fossil fuel-engaged holdings. While the group supports the church’s work on climate, she says divesting now would help get the country moving at a faster pace.

“From recent studies we’ve seen, even if we stay below the 2-degree centigrade threshold, sea levels will rise 5½ feet,” she said. “There is also the possibility the sea level could rise to 30 feet or as high as 165 feet if we continue on the path we are on now. The next few years are critical.”

According to Fohr, the PC(USA) has invested approximately $150 million in fossil fuels, giving the church a strong voice in corporate board rooms. John Hougens, a former MRTI Committee member who currently serves on the Environmental and Climate Change Issue Committee, says continued conversations with fossil fuel companies are making a difference.

“We’re not talking with administrative personnel but the vice presidents who are the decision-makers for these companies,” said Hougens. “Fifteen years ago, companies would not acknowledge climate change as an issue. Now, all of the major oil companies I talk to agree that climate change is real and that’s part of the progress we’ve made.”

Hougens and Fohr referred to President Donald Trump’s decision to withdraw from the Paris Climate Accord earlier this year, saying they are encouraged that companies will abide by the agreement regardless of the White House decision.

In May, shareholders approved a proposal urging ExxonMobil to better assess the company’s climate change-related risks. The proposal called on the oil giant to align itself with the Paris agreement. Hougens and Fohr say interfaith conversations have helped make that happen.

The Rev. Deborah Meinke is interim pastor of First Presbyterian Church in Stillwater, Oklahoma, as well as stated clerk for Cimarron Presbytery. Her advice for churches interested in getting involved in climate change is to become earth care congregations.

“That’s a point of entry for churches to see where they can engage. Advocacy is one area where congregations are most nervous and find it difficult to put their toes in the water,” she said. “I am hopeful that through faithful action, we can educate more congregations on the investment process.”

Meinke stressed the importance of working across denominations and other faith-based organizations to reach common ground on approaching climate change with the corporate world.