Ahead of #GivingTuesday, Between Two Pulpits journeys to Los Angeles and Minneapolis

Between Two Pulpits came to viewers Monday from churches in Minneapolis and Los Angeles, where the Immanuel Presbyterian Church’s transitional co-pastor, the Rev. Andrew Schweibert, in the photo at right, was joined by stalwart volunteer Del Byrne, far right. (Screenshot)

LOUISVILLE — Between Two Pulpits, the weekly broadcast hosted by Special Offerings’ Bryce Wiebe and Lauren Rogers, could just about call itself Between Two Coastlines Monday as Wiebe and Rogers hosted respectively from Immanuel Presbyterian Church in Los Angeles and Westminster Presbyterian Church, which is just a bit west of the Mississippi River in Minneapolis.

The two sites are among the four that will be featured during #GivingTuesday, a social media event that will be broadcast from noon through 8 p.m. Eastern Time on Nov. 30. Go here to learn more how to be a part. The livestream schedule is here.

Featured during Monday’s broadcast was Immanuel Presbyterian Church, which has hosted a direct service food program for its neighbors since the beginning of the pandemic. Wiebe interviewed the Rev. Andrew Schweibert, the church’s transitional co-pastor, and Del Byrne, who’s present nearly every day to help the church and its many partners provide up to 600 families with not only needed food but the human touch on three days each week, down from six days per week at the height of the pandemic.

“Del is there every single day,” Schweibert said. “We are a well-oiled machine at this point. There is a lot of need out there.”

“I have seen a lot of amazing efforts,” Byrne told Wiebe and Rogers, including the installation of a cold storage facility in what used to be a church closet. In addition, and with the help of the Presbytery of the Pacific, the church purchased a truck so volunteers can pick up food “and get it to people who need it,” Schweibert said.

“It has been a massive benefit to get to know people,” Byrne said. “When I listen, people understand that I care, and it takes their defenses down … If I’m not there, people are received in the same way with the same amount of care.” That’s important, Byrne said, because “it’s a hard thing for most people to admit the need to say, ‘I am not in control of this particular situation.’” 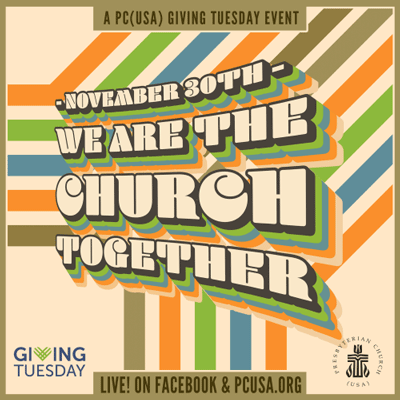 Schweibert said the church helps provide food to a community that’s quite diverse, with Korean, Salvadoran, Mexican, Chinese and North African families living nearby. “I can count in Korean now,” Byrne said, calling the service he and other volunteers offer “mutual respect and genuine interest. I am not a customer service representative who goes by a script. We all wish this hadn’t gone on as long as it has, but we are glad we are there.”

“We can’t do this alone,” Schweibert said. “We work in collaboration with everyone around us as much as we can.”

Asked by Wiebe to clue the audience in on what Schweibert might be preaching on during the second Sunday in Advent on Dec. 5, Schweibert pointed to the Luke 3:1-6 portion of the lectionary.

Luke “begins with the important people,” including Pontius Pilate and Herod and the high priests, Annas and Caiaphas, Schweibert pointed out. But Luke soon moves past those bigshots to focus on John the Baptist, who leans on Isaiah 40 to, as Schweibert put it, “preach Isaiah to the people who needed to hear it.” While the prophet Isaiah spoke to people in exile hoping to return to the land God promised them, “John preached to people awaiting the coming of the messiah.”

“The people coming to our doors are also in a place of awaiting some good news, and we are trying our best to bring them that good news” by “sharing out of the resources we have together,” Schweibert said.

“There’s a lot,” Schweibert said of Sunday’s gospel passage, for preachers “to jump off from there.”

Rogers concluded the conversation by asking both leaders about their hope for the church. Schweibert said it’s that the world might see the church “as a place of hope and light,” a place that sheds “light into their lives in their moments of darkness.”

“I believe,” Schweibert said, “we are doing our best to bring hope into the world around us.”

Byrne prefaced his hope for the church by noting that food aid from the government, which was strong during the 2020 election year, slowed considerably after that. Like Isaiah before him, Byrne envisions “a straighter path for helping people.” Byrne said he looks forward to the day “that lives can be made easier. You can still sense a bit of a burden on people,” even at this stage of the pandemic.

“I’m really grateful for the two of you,” Wiebe told Byrne and Schweibert, “and for your witness.”