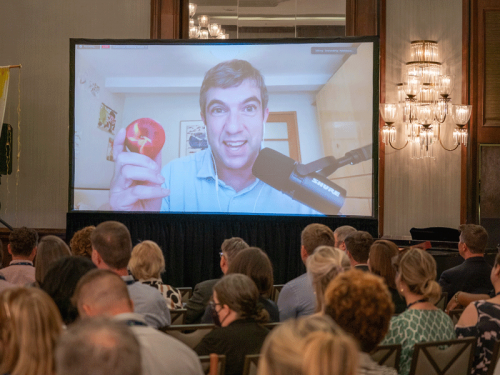 SAVANNAH, Georgia — Many people seek to follow the Bible. Few people take it as far as author A.J. Jacobs.

Jacobs is the author of the book “The Year of Living Biblically,” which chronicles his experiment to live for one year according to all of the moral codes expressed in the Bible. Jacobs was the first plenary speaker for Stewardship Kaleidoscope, an annual church stewardship best practices conference held this year in Savannah, Georgia, Sept. 26-28. The conference is a joint effort between the Presbyterian Church (U.S.A.) and the Evangelical Lutheran Church in America.

Jacobs presented via Zoom and immediately connected with the in-person audience by stating that he had turned up the heat in his apartment and brought a peach to relate to the in-person conference attendees in Georgia. His talk was full of wisdom, insight and a lot of self-deprecating humor.

Jacobs started his talk by explaining his writing process of taking on big “self-improvement” projects and writing about the good, the bad, the ugly and the weird. He writes about these self-improvement projects because he acknowledges that he needs a lot of improvement, referring to himself as a “fixer-upper.”

Jacobs explained that his first project was to read the entire Encyclopedia Britannica which led to his first book, “The Know-It-All: One Man’s Humble Quest to Become the Smartest Person in the World.” His next project was a book called “Drop Dead Healthy,” where he tried every diet and exercise he could find. He wrote the entire book while walking on a treadmill.

Jacobs then described his reasoning and process for writing “The Year of Living Biblically.” He stated that he wasn’t particularly religious, saying, “When I was growing up, I was Jewish in the same way that the Olive Garden is Italian.”

However, once he had a child, he decided he wanted to connect with a faith tradition. He read many different versions of the Bible, assembled an advisory board of ministers, rabbis, scholars and others, and created a list of more than 700 rules that he sought to follow for a year. He shared photos of his year of following the rules, including a photo of his twin sons born that year, stating he was following the command to “be fruitful and multiply.” He also showed photos of the beard he grew and the unusual for modern day New York clothes that he wore.

The project had a profound effect on him, changing the way he lives his life in dozens of ways, both big and small. He was nervous about the reception of his book because religion and humor can be difficult to mix, but most of the people from religious groups were happy that he took the project seriously because he kept an open mind and tried to be sincere.

The outer changes the inner

Jacobs shared an unattributed quote, stating, “It’s easier to act your way into a new way of thinking than it is to think your way into a new way of acting.” He used the example of a smile, that by smiling you can trick your brain into being happy. He visited a friend in a hospital by following the biblical rule to visit the sick, and in participating in this act of compassion, he realized that he became a more compassionate person. This is sometimes referred to as “Deed before creed” in Judaism. Jacobs learned that when you act in a moral way, you develop the basis of becoming a more moral person.

The importance of community

Jacobs stated, “I embedded myself during the year in several communities. I spent time with the Amish, with Hasidic Jews, I went to Israel, I learned to herd sheep, I called up Jehovah’s Witnesses and requested one to come visit me… The lesson I learned from all these experiences is how important community is to religion and faith.”

Jacobs reported that the founder of reconstruction Judaism said religion can be broken down into the three Bs: Belief, Belonging and Behavior. For Jacobs, it was amazing to learn about how much belonging matters. He joined a synagogue after writing the book and has benefitted from being part of a community, stating that it is important to your health to have a tightknit community.

Thou shalt not stereotype

Jacobs said, “Every time I had a stereotype or preconceived notion, it was busted. We tend to see groups outside of ourselves as monolithic. But it turns out there is such a variety within each group. We need to learn to meet each person on an individual basis. I loved meeting a variety of Christian faith traditions and learned that there are many different types.”

Thou shalt observe the Sabbath

Jacobs reminded those gathered that the Bible clearly states that we have to take off a day every week. In biblical times, this was a huge advance for workers, to keep one day sacred. Jacobs acknowledge that this practice was hard for him as a confessed workaholic, so it was a very important lesson to try to create a “sanctuary in time” by putting away his phone, turning off the computer and just being with his family and friends and experiencing life. He stated that this is even more important now because the pandemic blurred the lines between work and life, as does working from home. It’s also a key to mindfulness, according to Jacobs, to seek to be fully present.

Thou shalt say thanks

Gratitude is a significant biblical principle. This had such an impact on him that it inspired another book. After the year was over, he tried to keep gratitude rituals going. One of them is the recitation of thanks at mealtime, going through a series of people who were integral to getting the food to the table from the grower to the grocer to the hands that prepared it. Jacobs’ son pointed out that it was a good practice, but it was incomplete, because those people he was thanking couldn’t hear him, so Jacobs’ son challenged him to go thank each person directly.

This led him to write another book in which he would have to thank everyone who was responsible for getting him a cup of coffee. It started with the barista, the farmers who grew the coffee beans, the truck driver who transported it, the builder of the road that the trucker drove on, and on and on. He called the project and book “Thanks a Thousand” because there were 1,000 people who had some role in getting him the morning cup of coffee. Jacobs stated that as a society, we are “under-thankers.” This project helped to drive home what the Bible project started. It has helped him spread a feeling of gratitude and spread less negative bias.

Jacobs offered an interesting illustration of this idea, stating that every person has a “Larry David side” and a “Mister Rogers side.” Larry David, an actor, comedian, and the creator of “Seinfeld,” is sarcastic, biting, and negative. Jacobs said that we need to lean into our more positive, hopeful, and grateful side, our “Mister Rogers” side. Mister Rogers, of course, is the Presbyterian minister who became an icon for kindness through his long-running television show.

Audience members were invited to ask questions of Jacobs after his presentation.

Question: Any tips for self discipline?

Answer: It helps to have accountability. If you tell everyone that you are going to follow the Bible for a year, you will do it. I am also a huge fan of micro goals. If I think I have to write a whole book, I am paralyzed, but if I think about writing the first page of a chapter, I can do it.

Question: What did you learn about the Bible and what is says about money?

Answer: The Bible does say to tithe, so I gave 10% of my earnings, which is something I have continued to do. Whenever someone asks me about the Bible, I plead humility and say that it is a complicated book. But there is a strain in the Bible of extreme generosity. Try not to see it as something painful. Try to see it as something that will increase your happiness.

Question: What positive impacts did you see with your family in your undertakings?

Answer: I learned to enjoy the rituals that come with the Jewish faith, like Seders. I learned that rituals in general make our lives more meaningful. I was skeptical of them before, and I came to realize that there were rituals I did anyway like blowing out candles. I realized they don’t have to make sense. They just have to be life-affirming and bring people together.

Question: How have you noticed positivity, generosity, and gratitude in society since writing your book?

Answer: I think it’s absolutely necessary and we need more of it. It’s easy to focus on the negative and social media makes it so much easier and more tempting. But I’ve learned that positivity and gratitude are a discipline and I seek to put more of it out there. I remind myself that human nature can be good and that positivity is contagious.

Question: What do you think religion can teach the secular world about goodness and vice-versa?

Answer: It all depends on who is practicing religion and how they are practicing it. I try not to see it as religion vs. secularism as much as kindness vs. negativity. Fundamentalism occurs in many forms, not just religious communities. So, I recognize that secular and religious both have positives and negatives and try to focus on kindness.

Question: Do you still practice meditation?

Answer: I do try to practice every day, but I need to do it more. I do it in the traditional way of focusing on my breathing. I was just in the Rosh Hashanah services, which are two hours long. There were moments that weren’t as engaging, so I tried to meditate. I would focus on five things that I was hearing, five things that I was feeling in my body, and five things I was seeing. I love that as an exercise to make myself more present.

Question: In all of your self-experimentation, how have you learned to be gracious and generous with yourself?

Answer: It is something I’m still working on. I made up a checklist of mental health strategies including, “treat myself like I would treat a friend.” I find it so helpful to have self-compassion.

The Rev. Greg Allen-Pickett is pastor and head of staff of First Presbyterian Church in Hastings, Nebraska. Send comments on this story to robyn.sekula@presbyterianfoundation.org