As a presbytery meets to confront the racist legacy of a historical ‘White Utopia,’ federal agents pour into Portland 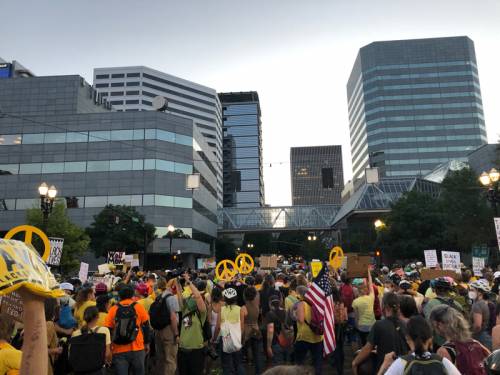 LOUISVILLE —  As the Rev. Brian Heron was preparing pastoral leaders and clerks of session in the Presbytery of the Cascades for their first presbytery-wide meeting in eight months, federal agents deployed to the city of Portland, Oregon, by the Department of Homeland Security were starting to show up.

Heron, Cascades’ Presbyter for Vision and Mission, was preparing church leaders who would be attending the meeting via Zoom to go deeper in their understanding of structural racism. He sent a letter asking each of them to prayerfully consider signing A Public Commitment: Faith Leaders Reckon With Racist Legacy in Oregon.

The document, produced by Interfaith leaders of the Common Table in Oregon, addresses the fact that in 1844 — 15 years before Oregon statehood — the Oregon Territory declared that region of the country to be a “White Utopia.”

Heron described the beating of Black people carried out in the name of a radical policy of exclusion. “You and I would not endorse such behavior today,” he wrote. “But if we are beginning to understand structural racism, we have to admit that the DNA that existed when our ancestors enforced a ‘White Utopia’ still lingers today.”

The irony of the presbytery having this conversation on the weekend of July 17-18, when federal agents were ratcheting up their presence in Portland, is not lost on Heron. The city has seen more than 50 consecutive nights of protests against racism and has witnessed some police brutality as well as fires set by a few protesters.

Despite feeling crisis fatigue, Heron felt like a Presbyterian response concerning the federal agents’ presence was needed, especially after hearing national news broadcasts describing Portland as “a city under siege,” which was laughable to him.

His desire was “to at least counter the narrative,” he said. 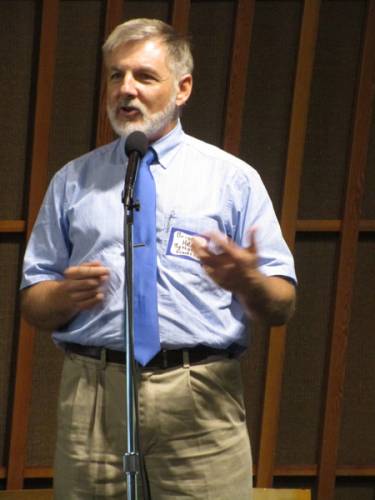 As nightly standoffs with police in Portland began to calm down in June, Heron said by the end of the month there were probably about 50 to 100 people at various organized protests downtown.

But as federal agents began showing up in July, fear and confusion followed. Multiple reports and videos showed heavily armed officers in camouflage using unmarked vehicles to whisk away what appeared to be peaceful protesters.

Heron, who went to the protests Monday night, emailed Presbyterian News Service saying that he had left before midnight, when the clashes started with federal agents and police.

“I wanted to let you know that the numbers were in the thousands,” he wrote.  “While limited to a small area it appears this largely younger crowd of 20- and 30-somethings don’t plan to back down until they see systemic change.”

The Rev. Linda Stewart-Kalen is pastor of a self-described “Common Ground” congregation at Colonial Heights Presbyterian Church, which is about 1.5 miles from the federal courthouse that  federal agents were sent to protect.

Stewart-Kalen said the building has been graffitied and has suffered small fires along with broken windows. In a recent Facebook post, she wrote that the agents’ actions “were not against a violent faction.” Referring to their presence as “an occupation,” she added, “Please know that our young families are saying very clearly that federal control is more like government lawlessness.”

Stewart-Kalen said it’s difficult for people in the church to know how to respond to what is happening in their city — even as they know in their hearts that something is wrong with how it is unfolding.  She said that Portland Mayor Ted Wheeler’s assessment that “racial and poverty issues plague us” is accurate.

“This has been with us long before COVID-19 and George Floyd,” she said.

In Oregon, that predates statehood. Racial exclusion dates back at least to 1846, when Oregon’s provisional government passed its first Exclusion Law, making it unlawful for “any Negro or Mulatto to reside in Oregon Territory.”  According to an Oregon Encyclopedia timeline, that law was repealed in 1854. But two years later, a new Exclusion Law was added which denied voting rights to Blacks, Chinese and Mulattos already in Oregon. Free Blacks and mulatto immigrants were barred from remaining or owning property, while property rights of “white foreigners” were protected.

Stewart-Kalen said organizers in the Black Lives Matter movement— and other groups, too — are concerned that federal officers’ actions are diverting attention away from police reform and the impact of structural racism.

While acknowledging there are people involved in tagging buildings, smashing windows, setting fires and taking more militant actions, they are a small fraction in relation to all the individual groups protesting, according to Stewart-Kalen.

The Revs. Beth and Gregg Neel, who co-pastor Westminster Presbyterian Church across the Willamette River from Portland’s Pearl District, which is just north of downtown, believe that the call of the church is to work for peace and reconciliation — which cannot be without justice.

“In our daily prayer services, people are feeling that injustice has been allowed to continue because of our white justice,” Beth said.  “So we repent, lament and do better.”

Neel joined several hundred moms Tuesday night at the protests to defend people who have been protesting in the park and to amplify Black voices.

In a text message, she said the moms formed a wall in front of the protestors. Occasionally instructed to link arms, they were reminded to provide a non-violent presence.

“The groups I was with left before tear gas was dropped, which happened about a half-hour after we left,” she wrote.

“The federal presence here is just political theater. We’re a testing ground,” Gregg Neel said. “Leadership here has been clear that we don’t want the federal agents here because they know it will only make matters worse.”

For Heron, the federal agents’ presence in Portland completely undermines trust. In trying to figure out how to respond to yet another crisis, he asked for the prayers of the denomination.

“It took everything we could do to get everyone at our presbytery meeting involved [in understanding structural racism],” he said.

On Thursday the title for Heron’s weekly blogpost Holy Breadcrumbs will be “Putting the Protest Back in Protestant.”