Providing food is a form of protest against government neglect

by Juan Lopez and the Rev. Cathy Chang | Special to the Presbyterian News Service 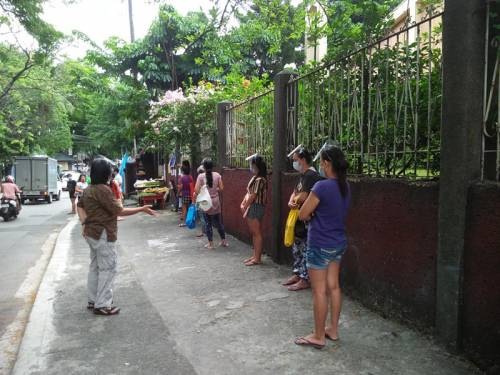 The Rev. Irma Mepico-Balaba visits with neighbors while waiting for the food pantry to open. (Contributed photo)

MANILA, Philippines — When the COVID-19 lockdown began in March 2020, the Filipino people struggled with difficulties and challenges. They faced varying degrees of community quarantine from enhanced, general, to modified, not receiving much help from the government.

Some barangays (loosely defined as neighborhoods with elected leadership) provided relief goods but not enough. A major loss was daily human interaction because Filipinos thrive with social and human exchanges, especially in the sharing of laughter and food. Compounded by social and economic realities, many Filipinos became further isolated with increases in poverty, disappearing everyday jobs, and growing hunger.

In April, Ana Patricia Non created the Maginhawa Community Food Pantry initiative aimed at fighting against the growing despair. With volunteers and donations, she began distributing food to her neighbors, reviving the spirit of community and cooperation known as bayanihan. Maginhawa is the heart of the University of the Philippines Diliman for students and teachers.  With the development of online classes, the neighborhood is not as alive as it used to be. The pantry brought much needed food to hungry workers, students and street dwellers.

Word spread fast and long lines soon followed. But the pantry had to close when policemen asked where the food was coming from and for what purpose. Rumors spread that the pantry was affiliated with terrorist groups in the Philippines, so the government red-tagged it. The spokesperson for the National Task Force to End Local Communist Armed Conflict (NTF-ELCAC) compared Non to Eve and the original sin, saying that her work was like Satan’s work. The volunteers at the food pantry feared for their lives and shut down the operation.

From politicians to human rights advocates, churches to concerned citizens, there was outrage among the Filipino people.  The police might have threatened this spirit of bayanihan, but people made it clear that police had crossed a line.  Around the country, more pantries popped up due to an outpouring of donations and volunteers. Webinars and social media posts instructed people how to create and sustain a food pantry, especially if anyone would attempt to thwart their efforts by red-tagging them and arresting them. Eventually the Maginhawa food pantry reopened, and hundreds more. 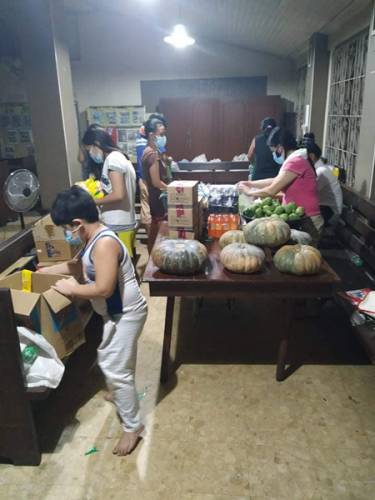 The Rev. Irma Mepico-Balaba from the UCCP Faith Bible Church was one of the pastors who felt compelled to respond with her church members. In 2014, Mepico-Balaba served as an International Peacemaker with the Presbyterian Peacemaking Program.  She called out the government closing the Maginhawa pantry. With her church’s limited resources and friends, they launched several relief operations.

During a recent online Sunday Service, Mepico-Balaba preached about life of the early Christians based on Acts 4:32-35, “All the believers were one in heart and mind. No one claimed that any of their possessions was their own, but they shared everything they had. … And God’s grace was so powerfully at work in them all that there were no needy persons among them. For from time to time those who owned land or houses sold them, brought the money from the sales and put it at the apostles’ feet, and it was distributed to anyone who had need.” She highlighted bayanihan, the spirit of sharing, so that no one will be deprived while others are in plenty.

After that sermon, Mepico-Balaba presented the concept of the Community Pantry to the Church Council. The idea was for people to share freely and take what they need without any intervention nor pressure. This was intentionally in contrast to relief packs that are usually pre-packaged for people. Given the context of Roxas District, where her church is located among many low-income and unemployed families, many members quickly volunteered with donations and time.

The next day, Mepico-Balaba provided an orientation about the expectations and conduct of the distribution for all the volunteers. All were placed and ready: the table, posters, alcohol dispenser and marker to ensure that physical distancing be properly observed. She initiated the day’s distribution efforts with a prayer.

On that first day, about 80 families arrived in the morning, and 75 in the afternoon to collect rice, mongo (lentils), cooking oil, milk and cocoa, donated by the Catholic nuns, in addition to sardines, vegetables, eggs, diapers, sanitary napkins, face masks, coffee and sugar. A neighbor in front of the church donated two crates of camote (sweet potato), and one passer-by dropped-off packs of pancit noodles with this message translated as “It’s my birthday, this is not a campaign — I am a mechanic, not a politician,” which was also handed out to the people.  After the first day, they reviewed and planned again for the next day. 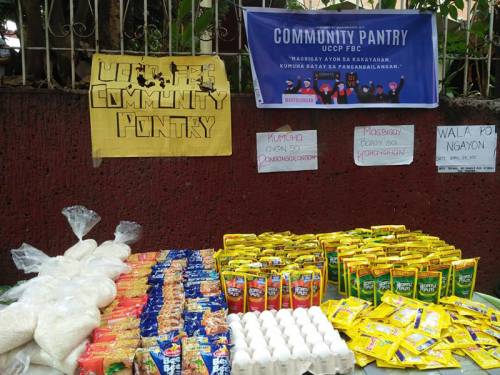 A few of food pantry items with signs and handwritten messages: “Give what you can share, and take what you need.” (Contributed photo)

Within the past two weeks, they have decided to open Monday and Tuesday, as well as Thursday through Saturday, with Wednesday as a rest day for volunteers.  They will operate when there is enough food to share.

According to Mepico-Balaba, “While we do this community pantry, we understand that this will not solve the roots of the historical problem of poverty in the country and that this is not sustainable. We find this as an immediate response to the peoples’ need. … This is also a form of protest against the government’s neglect … that people will really find ways to survive with or without the irresponsible leaders in the government. We have not forgotten that the government is the duty-bearer. With this, we are one with the people’s call for ayuda (help), free mass testing and vaccine for all.”