…be led forth in peace. (Isaiah 55:12). Support to the Peace & Global Witness Offering.
Make A Donation Click Here >
Home › Austin Seminary’s ‘Beyond the Walls’ program breaks down barriers

Bringing theological education to Hispanic Presbyterians, others who are underserved 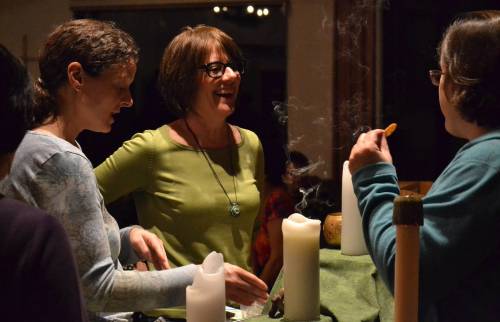 Melissa Wiginton (center) has been instrumental in helping Austin Presbyterian Theological Seminary live out its commitment to bring its resources to groups of people who might have special needs—or those are underserved. (Photo by Cheryl Brumbaugh-Cayford)

AUSTIN, Texas – Melissa Wiginton remembers the first thing she did after being hired by Austin Presbyterian Theological Seminary.

“We had to come up with a title when I started in 2011,” she says. “We wanted to make a statement about the seminary’s commitment to education with people who weren’t going to school here every day.”

Here’s what they decided: Wiginton would be named the first Vice-President for Education, Beyond the Walls.

She then went to work focusing on bringing Austin’s theological resources to those who might have a particular need in Central Texas. One of the more underserved population groups were Hispanic Presbyterians.

“In 1908, the Texas-Mexican Presbytery formed to establish churches for Hispanc people all over Texas,” says Wiginton. “They were separate from the churches for Anglos. They literally spoke two different languages.”

But as time went by and the culture changed, the Tex-Mex Presbytery was disolved and its member churches have diminished in number of participants and financial resources. Noticing that the leaders had fallen out of their pattern of annual gathering, Wiginton learned of their continuing desire for “mutual education, support, fellowship and encouragement”—and began to think about how the seminary might help.

Her efforts got a boost when the seminary received a grant from Memorial Drive Presbyterian Church in Houston to work on the issue and a small team of pastors from the Synod of the Sun began to meet for conversations about what could be done to support these Hispanic churches.

“They began casting the vision of where they’d like to see their churches be in five, ten and fifteen years,” says Wiginton. “And they started to identify what needed to be done to fill the gap, to help make it happen.”

One of the first questions to emerge out of the visioning conversation was, “where are the next generation of leaders coming from?”

To help answer that, Austin invited the Presbyterian Pan American School into the conversation. The historically Presbyterian racial-ethnic college preparatory school in Kingsville has a student population that is 78 percent Hispanic.

“Pan Am has brought young people to every meeting,” says Wiginton. “It has been a delight to everyone here to learn of their theological interest, and to connect them to people they otherwise might not know.”

Thanks to additional grants and funds from the Synod of the Sun, the group was able to establish an official Hispanic Ministries Mission Network. At its first gathering in April of 2014, it drew people from all over the state. Last year, more than 60 people attended.

As the network began to establish priorities the key thing they wanted was leadership education—not just for pastors or church leaders, but for those in their pews. So Austin Seminary added an online certificate program, the Certificado en Ministerio, to its offerings. Taught by Spanish speaking scholars, it parallels the school’s English speaking Certificate in Ministry desgined to meet the requirements for becoming a certified ruling elder in the Presbyterian Church (U.S.A.)

“Hispanic people will be in the majority in our region in the next 20 years,” says Wiginton. “We want to offer education with their questions at the forefront. They’re very committed to starting new churches. So we added a mission course for the Certificado that teaches church planting. It has had really good participation.”

Beyond the Walls also offers a twice a year event called Cruzando la Frontera; a day of education in Spanish which invites people to engage in an academic topic of theological education from the perspective of life in the borderlands.

“As we’re studying theological topics like ethics, worship, the Bible and theology, we ask ourselves what boundaries between Texas and Mexico mean in terms of cultural realities?” says Wiginton. “The conversations have been lively, with scholars, people in the pews, and pastors providing their different perspectives.”

As a native Texan, Wiginton knows something of Hispanic culture, but she has become an ardent student of Hispanic people and society in her Beyond the Walls work—about how deeply joyful they are, how they never get together without “some sort of party,” and how the students and people they meet are very hungry to learn.

“Sometimes people who take education for granted as an expected right don’t lead with that eagerness,” she says. “It’s very gratifying to have access to resources that we can make available to serve people who are preparing to serve our God in more excellent ways.”