The Seminary’s ninth president began his tenure in 2002, just after its Centennial Celebration 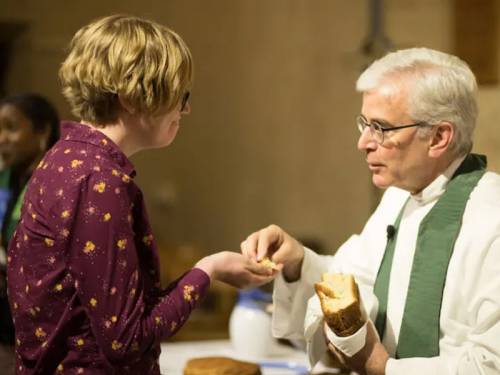 The Rev. Ted Wardlaw, the ninth president of Austin Presbyterian Theological Seminary, has announced he plans to retire in 2022. (Contributed photo)

According to a seminary news release, Wardlaw plans to stay in office until his successor is named, possibly by June 30, 2022, but no later than the end of the 2022 calendar year.

In remarks to the Austin Seminary’s Board of Trustees on Tuesday, Wardlaw said, “The 20 years during which my family and I have been a part of this campus have been the most stimulating, challenging, doxological years we have known … A lot of this work across years has endeavored to make Austin Seminary a more diverse, equitable, inclusive, welcoming, and, yes, ‘winsome’ place for all. And, by the way, over these years I have come to love that word ‘winsome,’ which … is part of our official mission statement. … [I]t describes much about the spirit of this seminary. Students, faculty, staff, and, I dare say, presidents have been attracted to this place by its winsome appearance and character.”

Ted Wardlaw began his tenure at Austin Seminary following the Seminary’s Centennial Celebration in the fall of 2002; he was inaugurated in the spring of 2003. He has led unprecedented fund-raising efforts that have raised nearly $100 million and increased the Seminary’s endowment by 60%. Funding, including the largest single campaign in the Seminary’s history and the largest non-bequest gift, has financed important Austin Seminary initiatives such as transforming the campus with two new, four-story apartment buildings for students and an expanded and renovated library to be dedicated in January 2022 as the Mary B. and Robert J. Wright Learning and Information Center; eight new endowed faculty chairs, including one in sacred music; eleven “full-ride” student fellowships, including two for international students; and the perpetual endowment of the College of Pastoral Leaders. Wardlaw has presided over the selection of a large majority of the present-day faculty, including Margaret Aymer, Gregory Cuéllar, Bridgett Green, Carolyn Helsel, Phil Helsel, Paul Hooker, Bobbi Kaye Jones, Jennifer Lord, Song-Mi Suzie Park, Asante Todd, Eric Wall, David White, Melissa Wiginton, and Andrew Zirschky. Nearly half of living graduates were students during his presidency.

During his time as president, academic programs expanded to include three new degree programs, the Master of Arts in Youth Ministry, the Master of Arts in Religion, and the Master of Arts in Ministry Practice; a dual degree with the University of Texas Steve Hicks School of Social Work; and three primarily online certificate programs. The Office of Education Beyond the Walls was established and has grown to serve 700-1,000 Christian leaders and learners each year. Most recently, De Puertas Abiertos fellowships have been established to provide 100% tuition grants to students of color.

Reflecting his deep commitment to pastoral ministry in the Presbyterian Church (U.S.A.), Wardlaw imagined into being the Austin Seminary Post-Graduate Residency program designed to offer two graduating Presbyterian students the unique opportunity each year to continue formation in thriving congregational settings for the first two years of ministry. Elements of all these initiatives have focused on the institution’s commitment to a diverse community, and all have positioned Austin Seminary to embrace some of the challenges facing theological education in the 21st century.

Among the challenges faced during his time of leadership, the financial crisis of 2008 saw the Seminary’s endowment plummet by 30% and required painful fiscal and personnel decisions. Over the ensuing years, Wardlaw rebuilt the staff and steered the recovery of the Seminary’s financial resources to a robust endowment of $161 million.

Contemplating his presidency, Wardlaw said in his remarks to the board, “What does it take to have a long and essentially happy tenure when a president accepts a call to serve a seminary? It may take whatever attributes a given president brings to the table. But in the greatest measure, I think, it takes more than what one person can ever bring. It takes a certain winsomeness, for sure, and also, I think, it takes at least the following things: a healthy, forward-looking community marked by spiritual nurture, a sacramental presence that reminds us that it’s not just us down here, an ethic of generosity and generous academic conversation, love for knowledge, love for the church, and a good healthy dosage of humility. These are among the marks of this place, and whatever nurture I’ve brought to it, I’ve received so much more.”

He has served on the Board of Trustees of Montreat Conference Center. He has been editor-at-large of The Presbyterian Outlook and still writes three “Benedictory” columns a year for that publication. He also writes regularly for The Christian Century and The Journal for Preachers.

Following his retirement, Wardlaw and his wife, Kay Bryant, expect to share their time between Montreat and Austin for the foreseeable future.