‘When you make a commitment that your culture should be welcoming to all people, you will inevitably run into confrontation with people who don’t believe that’ 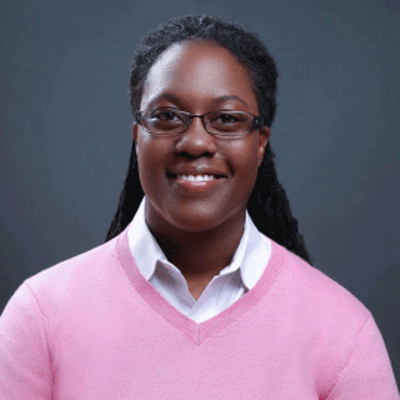 LOUISVILLE — Dr. Keisha E. McKenzie told the Rev. Dr. Lee Hinson-Hasty during his Leading Theologically broadcast last month she’s drawn to biblical characters with vision, including the prophet Jeremiah and John of Patmos, especially the latter with his “vision of a new Earth populated by an uncountable number of people from all kinds of backgrounds.” Her affinity is for “people who have learned what it is to be just and faithful and true and kind. A community of love as practice — that’s the vision John was drawn to.”

McKenzie is Senior Vice President of Programs at Auburn Seminary in New York City. Hinson-Hasty is Senior Director of Theological Education Funds Development at the Presbyterian Foundation. Listen to their 32-minute conversation here.

John’s vision is the kind she found inspiring when she joined the Seventh- Day Adventist Church at age 13, which she said has a “lovely tradition around the role of education as a way of shaping mind, body and spirit as a unit, and a long tradition of public service … in the sense of taking practical skills you have and putting them in the service of the community that you are in. The key question is, how do we flourish together? That’s the key to the work we do.”

Auburn Seminary has been in operation for more than 200 years. “We have been thinking about the role religion can play in public life,” McKenzie said, “for us to be more humane to each other and to be inspired by traditions that shaped us but not shackled by them.”

McKenzie read aloud this paragraph the seminary’s Board of Directors published: “Love is the foundation of Auburn’s participation and leadership in multifaith justice work. Justice is the embodying of love in the public square — that is, in community. Justice requires us to work with all who strive to know and share love in the world in moving toward the beloved community envisioned by us all. No one of us has full understanding of the path before us. We do best when we delight in the energy, intelligence, imagination and love we each bring to the work and when we acknowledge that our understanding is always limited and often flawed. Change will be constant, demanding innovation and flexibility, the humility to listen to our hearts, to each other and to the mystery, and the courage to share with the whole world what each hears is the best process for setting our way together.”

“It feels like an invitation to congregations too,” Hinson-Hasty said.

“You can’t control the conditions around you,” McKenzie replied, “but you can be intentional about the values you bring to those conditions.”

One way the seminary has been intentional is developing six principles of religious liberty, part of the “All Faiths and None” project the seminary undertook with the Columbia Law School Law, Rights and Religion Project. Read more here.

“We take these six principles as foundational and we treat them as values that can guide conversation with each other,” McKenzie said. “We have the opportunity to enter into this question of ‘how do we live well together?’ without starting at the point of conflict or thinking about religious freedom as a sword or a shield.”

“Congregations, whether they’re rural or urban, large or small — I know so many are trying to figure this out, and it’s tough,” Hinson-Hasty said. “They’re getting labeled when they take a position.” One congregation, he said, got a Christmas card from “Jesus” that was “filled with hate speech.”

“I hope it’s encouraging for congregations trying to figure out how to be faithful and how to live out their values,” Hinson-Hasty said of the “All Faiths and None” resource.

For congregations wondering whether they should weigh in on community questions, “knowing up front you will get backlash is very helpful,” McKenzie said. “When you make a commitment that your culture should be welcoming to all people, you will inevitably run into confrontation with people who don’t believe that.”

“You can somewhat anticipate that angst and prepare your congregants from that angry letter from Jesus,” she said.

Asked to offer listeners a blessing, McKenzie concluded with these words: “May your heart be flooded with love and may love be your path through this world. May justice be the common tongue that you speak behind closed institutional doors, in community and in the public square. May you remain soft enough to remember we cannot be beloved community by ourselves, to reach for the hands beside you. May you live and see and know with imagination and humility. May curiosity, delight and mystery carry you from all you know to more of what you can become, and may you have the courage to share with the whole what you hear from Spirit about the next step for you, for us and our way together. Amen.”