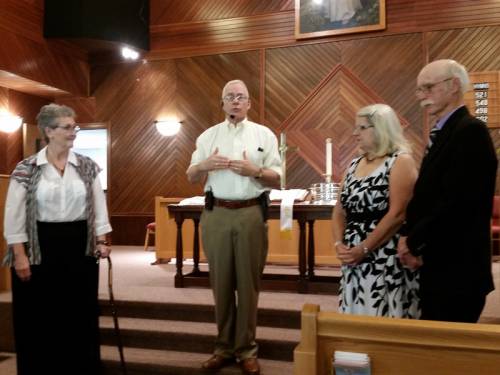 LOUISVILLE — If there can be Christmas in July, why not Easter in October? Or Palm Sunday, for that matter?

Reconfiguring the traditional and liturgical calendar was precisely what the First Presbyterian Church of Taymouth in Birch Run, Michigan, did after Bonnie Pratt, who chairs the church’s Mission Committee, originally approached the session back in February 2020. Pratt’s proposal that the congregation receive One Great Hour of Sharing during Lent ended up being sidelined. That is, until now.

“We made a request to session for several different projects that we wanted to do this year, but due to the COVID-19 virus, we were not able to do some of those we requested,” Pratt said.

Instead, the 125-member congregation in rural Saginaw County in the Presbytery of Lake Huron decided to receive One Great Hour of Sharing on all four Sundays in the month of October.

“We felt that it had been some time since we had given to this program, and that the time was right to do so,” she said. “Especially in the midst of all that is happening in this world of ours, giving to this program feels really right. Just in the United States, there are the fires in the western states and hurricanes in the south. There are so many people who need assistance. Maybe back in February that’s what led us to this program. God works in mysterious ways.”

The three programs supported by One Great Hour of Sharing — Presbyterian Disaster Assistance, the Presbyterian Hunger Program and Self-Development of People — all work in different ways to serve individuals and communities in need. From initial disaster response to ongoing community development, their work fits together to provide people with safety, sustenance and hope.

For the church’s pastor, the Rev. John Scott Kroener — more familiarly known by members of the congregation as Pastor Scott — the session’s decision to collect one of the PC(USA)’s four special offerings came as welcome news. Kroener, a retired Navy chaplain who was called to First Presbyterian in December 2016, grew up with fond memories of One Great Hour of Sharing, Christmas Joy and the former Peacemaking Offering, now known as Peace & Global Witness. 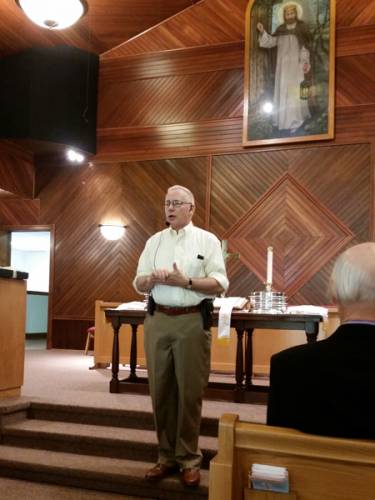 “We may be a small church, but we’re very dynamic and mission-oriented,” said Kroener. “This church is like a little Ferrari — it hugs the roads and the mountainsides and it goes. It really goes! I was quite ecstatic when they mentioned the One Great Hour of Sharing, because outside of disaster relief through Presbyterian Disaster Assistance, we haven’t had an effort at the national level since I arrived four years ago.”

Also sharing Kroener’s enthusiasm was Kathy Maurer, an elder who currently serves as a member of the Presbyterian Mission Agency Board and chairs its Resource Allocation and Stewardship Committee.

Although Maurer couldn’t recall her church having previously received One Great Hour of Sharing, some detective work on Kroener’s part led him to the discovery that the congregation had indeed taken part in the special offering seven years ago in April 2013, and again seven years before that in May 2006.

“In the Bible, we like ‘magic numbers’ and seven is a good one,” Kroener said. “I’m not sure why we did it every seven years, but in small congregations you want to spread out your projects and offerings so that you’re not always hitting everybody all at once.”

Now that the congregation has rediscovered the joy of giving through One Great Hour of Sharing, Kroener expects that a next step for its members is to “put our feet to the ground and our hands to the surfaces toward having a physical presence in the community.”

He is already seeing great strides toward that goal in the many new partnerships that the congregation has forged over the last few years with area churches to jointly sponsor a Vacation Bible School, to collect food for a community food pantry run by the local Roman Catholic parish and to donate needed items for a community baby pantry sponsored by Christ Lutheran Church of Birch Run and a clothing closet run by Birch Run United Methodist Church.

“Our working together been a really positive thing, and we’re still looking at how our churches together can have an impact on the larger community,” said Kroener. “The essence of it is that even though we’re a small church, we have a big heart. We recognize that there are needs locally, nationally and internationally that we want to tap into. If we all do a little, it adds up to a lot.” 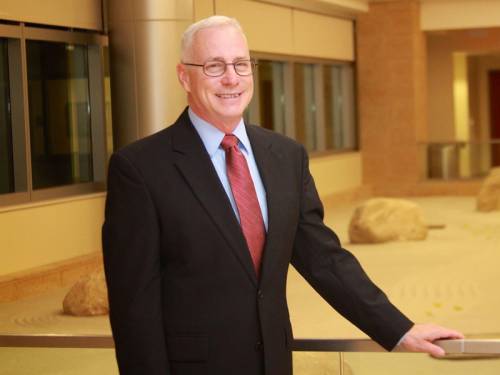 “If we all do a little,” says Pastor John Scott Kroener, “it adds up to a lot.” (Contributed photo)

Pratt said that because the Mission Committee usually offers a different program each month to which members are invited to give, she is looking forward to the congregation’s response to One Great Hour of Sharing now that the month of October is under way.

Because most PC(USA) congregations were not able to meet in person on Palm Sunday or Easter, the traditional times when One Great Hour of Sharing is received, they — like First Presbyterian — made the necessary missional and calendar adjustments, which may again be necessary for Christmas Joy and future special offerings as coronavirus cases surge across the U.S.

“With COVID-19, our congregation recognized the impact on giving,” Maurer said. “It is important to make giving to One Great Hour of Sharing a priority. If we all give a little — a cup of coffee a couple of times a week — together we can make an impact. That is what it means to be the connectional church. As a PMAB board member I see the incredible work our denomination accomplishes with all the gifts they receive. I thought it was brilliant to dedicate the month of October to One Great Hour of Sharing. Working together we can accomplish anything.”

Give to One Great Hour of Sharing to support Presbyterian Disaster Assistance, the Presbyterian Hunger Program, and Self-Development of People.