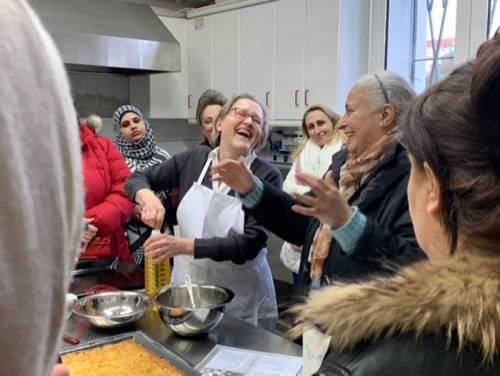 Before physical distancing, Nadia Ayoub meets with a group of refugee women to do some baking and informal worship. (Contributed photo)

LOUISVILLE — In the fall of 2015, mission co-worker Nadia Ayoub was attending a conference with colleagues in Budapest when the city’s Keleti train station became the epicenter of the refugee crisis overwhelming Europe. She could not forget the images of children sleeping on cardboard, families with not enough to eat and the pervasive fear of what would happen next.

At that moment she felt a strong call to work with refugees.

Then working with the Roma people in Ukraine, she has moved to the city of Katerini on Greece’s mainland to serve in partnership with Perichoresis, a Presbyterian Church (U.S.A.) global partner that works to alleviate some of the hardships suffered by refugees.

Perichoresis provides housing and support for approximately 550 refugees in 115 apartments in Katerini. Initially people were taking refugees into their homes. But it quickly became apparent that was a temporary solution. 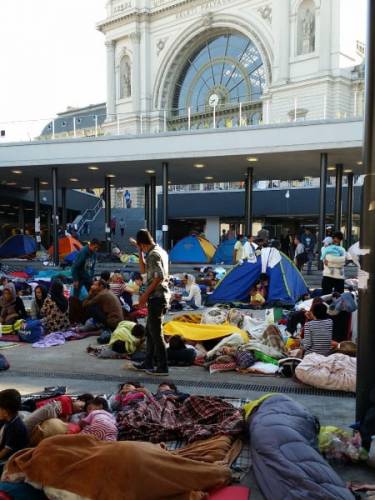 In 2015, the Keleti train station in Budapest was the epicenter of Europe’s refugee crisis. (Photo by Burkhard Paetzold)

“When refugees had to camp out in Idomeni, Greece, on their Balkan route trail in 2015, members of the Evangelical Church in Greece rediscovered their own forced migration story from 100 years ago and decided to organize support,” said Burkhard Paetzold, Presbyterian World Mission’s regional liaison for Central and Western Europe.

Now their expanded programs include a nursery school, sports activities, and socio-therapeutic groups for children, adolescents and women. It also supports refugees with medical appointments and visits with lawyers.

Before forced isolation from the pandemic, Ayoub accompanied pregnant women and children to doctor’s appointments to facilitate communication and be an advocate. Currently she serves as a translator. She speaks Arabic, English, Russian and Hungarian, and her Greek vocabulary is expanding rapidly.

According to the International Rescue Committee, the refugee population in Greece is about 50,000 — more than 38,000 on the mainland and more than 11,000 on the islands. Over half are women and children and of those, about 3,000 are traveling alone.

Ayoub says she sees God at work in the families she assists.

The Fouad family, with whom she has an ongoing relationship, has just left Greece after five years to seek asylum in Germany. Perichoresis helped the family, with five children, find housing, and the father a job with a restaurant. He began by doing cleaning; then the owner trained him to work in the kitchen. Before he left, he was preparing traditional Palestinian dishes on a regular basis for the customers.

In early March, the Evangelical Church in Athens received a message about a single Syrian refugee woman with two children who was depressed and needed help but spoke only Arabic. The church sent her information to Nadia to so she could communicate with her. Arabic is Ayoub’s native language.

“Every day I sent her a message and asked about her and her children,” she said. “The messages included some Bible verses and Christian songs. I thank God that he encouraged me to keep talking with her, and little by little she started to be comforted. One day, she sent me a joyful message to thank me for writing to her every day and caring for her and her children. Early one morning she sent me a Bible message for the first time. I trust the Lord is helping her and she is on her way to complete healing.”

Ayoub said refugees lost job opportunities during the agricultural season because of the COVID-19 pandemic, leaving many in need of food. The Greek government promised grants, but refugees are not eligible. The Karypidis family, a Greek family she sometimes helps with translation, was disappointed they could not invite refugee families for an Easter celebration. Instead, they distributed food to the 20 families under their care. The grandfather of the family wrote small messages in Greek; Ayoub translated the messages into Arabic to include with the food packages.

“Because most people do not plan to stay in Greece, I wondered if I could create a lasting ministry with impact,” she said. “These examples show me that I can. I really am seeing the goodness of God in this land.”

Her work with Perichoresis, Ayoub believes, is part of the Matthew 25 call. “We welcome strangers into our homes and offer them shelter, food and other things they need,” she said. “They are acting as God’s hands and feet to take care of the least of Christ’s brothers and sisters as Jesus taught in Matthew 25 — what (we are) to do while waiting for the kingdom of God to come. The Greek Evangelical Church has set an example for all.”

Ayoub asks U.S. Presbyterians to keep Perichoresis in their prayers.

“I urge PC(USA) congregations to pray fervently for Perichoresis staff because they are the ones who keep it going in the right direction. Also, I humbly ask for your continued support for me so that I may continue to serve God with this God-founded institution,” she said.

She believes her call to serve refugees is rooted in her own experience of being a stranger in the many places she has called home. Immigrating from Egypt to New Jersey necessitated learning a new land and culture, as did the many years she spent in Central Asia and Ukraine.

“As I think about my call to serve among refugees and strangers,” she said, “I see I was that stranger not once but many times. And God has always provided individuals and communities to welcome me. I only can give thanks to God and pray I will be able to welcome others and make them feel at home in strange places.” 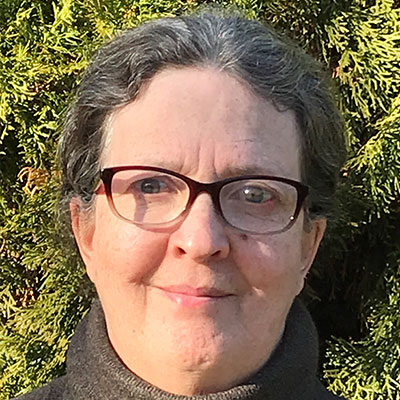