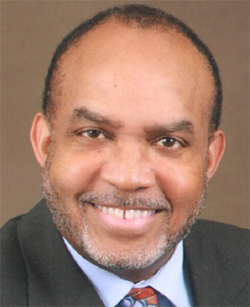 LOUISVILLE – With a student body that represents 20 different denominations, Louisville Presbyterian Theological Seminary has named a scholar of diverse religions and cultures as its tenth president.

The Louisville Seminary Board of Trustees voted June 7 to appoint the Rev. Dr. Alton B. Pollard III as president. A scholar, author, consultant and speaker on the subject of African American religion and culture, Pollard was previously dean of the School of Divinity and professor of Religion and Culture at Howard University in Washington, D.C.

Louisville Seminary offers master’s and doctorate degree programs that prepare graduates for a number of roles in ministry and administration for Presbyterian and other church denominations as well as for marriage and family therapy.

Pollard said he was drawn both by the history and the current trajectory of Louisville Seminary.

“Rare is the theological institution today that innovates well in contemporary society, modeling theological education for just inclusivity in an increasingly diverse world,” Pollard said. “As much of our society is focused on division, I will ensure that Louisville Seminary will continue to build bridges between people of different religious, social and cultural perspectives, through teaching and scholarship, and the preparation of persons for lives of faithful witness and public service.”

Prior to his eleven years at Howard University, Pollard served as director of Black Church Studies and chair of American Religious Cultures at Emory University, and taught at Wake Forest University and St. Olaf College. He earned degrees from Duke University, Harvard University Divinity School and Fisk University.

Pollard has authored, co-authored and edited a number of books and journal articles. He serves on the Board of Directors for the In Trust Center for Theological Schools and the Advisory Committee for the Luce Fund for Theological Education. He served on the Board of Commissioners for the Association of Theological Schools from 2010-2016 and was chair from 2014-2016.  A native of St. Paul, Minnesota, Pollard and his wife Jessica have two adult children.

Current Seminary President Rev. Dr. Michael Jinkins announced his retirement in April 2017. Pollard will begin work as president at the start of the fall semester this September and will be formally inaugurated in spring 2019.

Pollard’s appointment follows a national search conducted by a presidential search committee including several Seminary trustees, faculty members, and other seminary constituents and led by Board Chair Lant B. Davis of Birmingham, Alabama.

“Dr. Pollard embodies Louisville Seminary’s long tradition of bridging differences within the church and broader society,” said Davis. “He will affirm and further develop our historic Presbyterian emphasis on inter-denominational cooperation. Under his leadership I hope the Seminary will demonstrate a way forward through some of the most divisive issues of our time. He is a principled peacemaker.”

Jinkins will continue to serve as president until September 2. During his eight-year tenure, Louisville Seminary launched its bold Covenant for the Future vision which made full-tuition scholarships available for every master’s degree student and, by 2021, will provide stipends for living expenses. The only seminary in the country to offer this benefit, Louisville Seminary students participating in the scholarship “pay the debt forward” by engaging in learning and service opportunities that enhance their opportunities for leadership in church and non-profit sectors.

Other highlights of Jinkins’ leadership include the growth of the Seminary’s Marriage and Family Therapy program, one of only four seminary-based accredited programs in the nation, and the Doors to Dialogue program that prepares students to lead in a world of growing religious differences and needs including immigrant communities, urban centers, intolerance and environmental preservation.

“Dr. Pollard’s reputation as an eminent scholar and renowned leader precedes him,” said Jinkins. “I believe he is precisely the leader Louisville Seminary needs for the next chapter in its history. And I feel honored to welcome him as the next president of the Seminary.”