Make A Donation Click Here >
Home › All about the story

At Synod School, Barnhart talks about films that inspire conversation 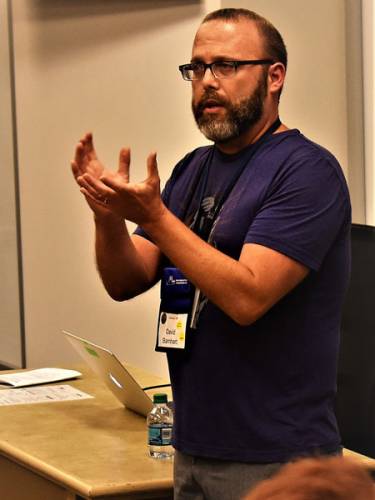 STORM LAKE, Iowa — For David Barnhart, it’s the story — not his story, but the story of the subject.

“One of the things I love about the work that we do is that we don’t know where it’s going. We have no idea where it’s going and what the focus is,” he said. “What we try to do is work with the community and have them guide us and [the film] needs to go wherever it needs to get.”

That was Barnhart, who served as artist-in-residence at this summer’s Synod School, the midsummer ministry of the Synod of Lakes and Prairies. Barnhart, an award-winning director and filmmaker, produces documentaries through Presbyterian Disaster Assistance’s Story Productions. His films are becoming well recognized across the country.

At Synod School, which ran July 21-26 at Buena Vista University in Storm Lake, Iowa, drawing more than 635 participants, Barnhart presented a film series Monday through Thursday, showing “Flint: The Poisoning of an American City,” “Trigger: The Ripple Effect of Gun Violence,” “Locked in a Box,” “Kepulihan: When the Waters Recede,” and an in-progress film on race and racism.

“The voice of the project is the community we work with,” Barnhart said as he introduced “Kepulihan” on Tuesday evening. The documentary was a 10-year project on the impact of the 2004 tsunami on one man and one community on the Indonesian island of Sumatra.

“We don’t come with an agenda,” Barnhart said. “We don’t come looking for soundbites and trying to control the agenda. One of the ways we kind of formulated or developed this methodology was after the 2004 tsunami.”

He described it like this: “What we are going to see are scenes and pieces. What we won’t see is what went into it. We would sit down and do an interview together and then we’d sit down and watch it afterwards — with the family, with the person.

“And then we’d talk about what they talked about and talk about the issues that were important to them. And we’d brainstorm, sitting on the floor for an hour or so. So, OK, how do we tell that story? And then we’d go out with them and get those images.”

It opens with this: “What I remember is the tsunami took my whole family. I had to bury each one of them with my own hands. That’s what I remember. Over the years I’ve gained a lot of wisdom in my life, the wisdom of living through chaos. I was starting my life over from nothing.”

Those were the words of Pak Yadi. He buried 16 members of his family. All told, Yadi said, he “buried 32 people with my own hands.” The series of waves killed 230,000 people in 14 countries. In Indonesia the death toll was 168,000. In Yadi’s village, the waves killed more than half the people.

And Barnhart and his team continued to come back — for 10 years.

“We’re in the community. We’re directed by the person we’re working with. And then we’d come back five months later and show it to them. They could see and hear the words from where they were six months earlier,” Barnhart said.

During those 10 years Yadi received a $400 seed grant through the Presbyterian Church (U.S.A.) and PDA. The funds came from the One Great Hour of Sharing offering. Yadi raised crops and eventually started a cooperative in his community. The now-successful venture specializes in organic fertilizer. 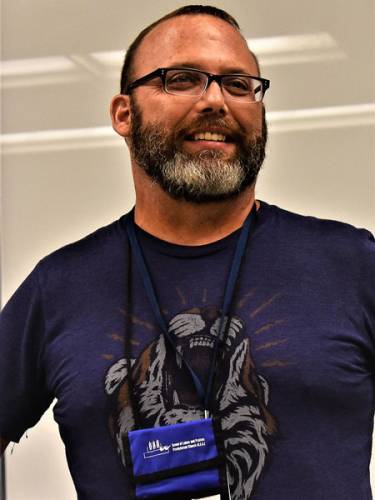 Over the years, Barnhart and his crew gained the trust of Yadi’s community. After about six years, Barnhart said they were watching the film with Yadi when Yadi left and came back with about 50 to 60 people. “We sat everybody down and eventually we had to go get a projector,” Barnhart said. “We learned after this and we would project it. And he would share his story with his neighbors.”

The trust of the community came through the commitment to return. “A lot of people say we’re coming back, we’re with you, solidarity,” Barnhart said, but most don’t. “That’s a great thing about the Presbyterian church and PDA. It’s not six months, it’s not a year, or five years. When we kept coming back, [Yadi’s community] saw that we were really with them. More and more we were invited into that community.”

This film, like the others of Story Productions, is intended as a resource across the church.

“We want these films to be resources for conversation,” Barnhart said, adding that “Trigger” explains the impact of gun violence, “Locked in a Box” highlights immigration issues and “Kepulihan” elicits inspiration.

“Stories,” he said, “are a fundamental part of our lives.”

Duane Sweep is director of communications for the Synod of Lakes and Prairies. He sometimes writes for the Presbyterian News Service.